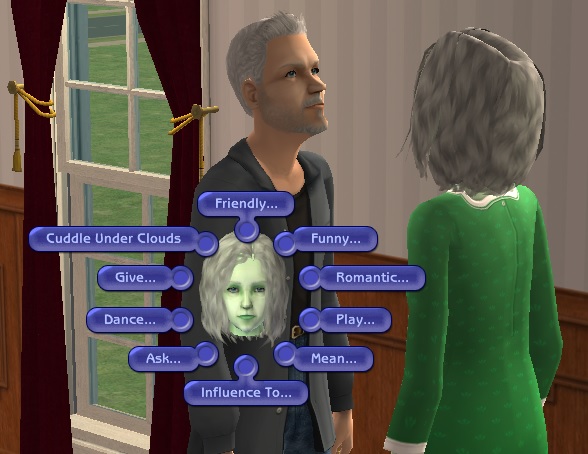 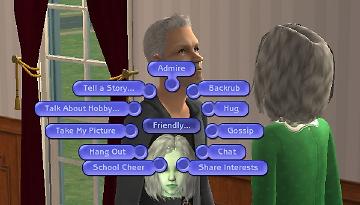 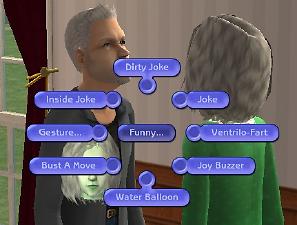 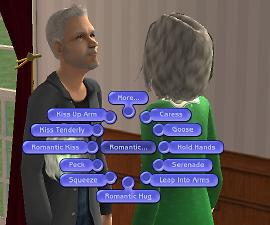 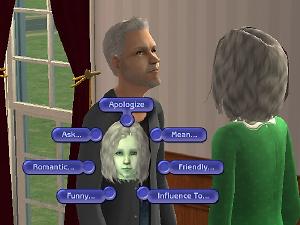 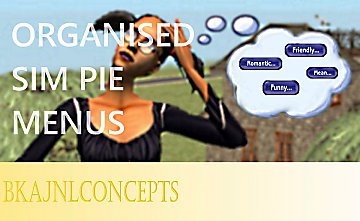 WHAT THIS MOD DOES:
If you play lots of The Sims 3 or 4 for example, you know you have a few, neat and tidy menus for interacting with other sims, Friendly, Funny, Mean and Romantic. The Sims 2, however has various menus like Flirt, Hug, Talk, Appreciate, Entertain, Irritate etc. The menus have been sorted... But into many different categories.

My mod fixes all this by sorting it like the Sims 3 and 4. You now have Mean, Funny, Friendly and Romantic. These menus contain everything to do with interacting with other Sims. Some menus have sub menus, for example, "Funny.../Gesture.../" All the gestures go in here under a sub-category.

COMPATIBILITY:
Game Minimum Requirements: This mod requires Pets or a LATER Expansion Pack Or Stuff Pack is required to run this mod. Earlier releases including the base game sort the menus wrong.

Game EP/SP Compatibility:With the minimum requirements, add on any EP or SP. For example, if you add Bon Voyage to a Seasons game, the Funny.../Gesture.../ menu will appear. If you don't have Bon Voyage, that menu won't appear. So basically, the interactions are all sorted in this mod. You need to get the required EP or SP to get the interactions from that EP to show up.

Game Language Compatibility:Currently the mod is only compatible with American English and Brazilian Portuguese games. If you want to translate for Non-English languages and you know both English and your language, PM me and go ahead. DO NOT USE GOOGLE TRANSLATE

Mod Conflicts: Check the mod incompatibility list below. There are two types of mod incompatibilities with my mod, which are Type A and Type B (As I have labeled them.) Type A: If for example another mod sorts the Pie Menus like my mod does, it will be incompatible. Type B: If any other mod were to add a new interaction to any of these categories, for example they added "Ask about Day," it wouldn't work correctly because there is no talk menu anymore. It will re-add the menu, creating an unwanted one. Type A can't be fixed, but Type B could be fixed with negotiations with the mod maker. If the mod maker isn't on MTS or is inactive, I might make a compatible version for you which I will PM you a link. It's my decision however.


LdDarcy's Pie Menu Strings Fix, can be fixed by loading my mod last (by putting a 'z' in front of BkajnlConcepts of the file name of my mod.)
InTeen, not sure why, nor do I have the capability to fix it, probably. I think it is expecting interactions which are now sorted elsewhere.
- Sorry, this list is incomplete. Blame me for being lazy, just take caution with any mod with 'Pie Menu' in it's title (Except if they are other language fixes (Except if it's Brazilian Portuguese.))

Please look further to see any errors I know about or a Q&A or Compatibility or anything else you desire.

P.S. The hair used on the female sim is by Nouk.


Q: What are your future plans for this mod?
A: To release a version that is compatible with English UK. I will possibly seek out translators for other languages as well.

This mod requires The Sims 2 Base Game and The Sims 2 Pets or LATER EP/SP. Confirmation needed if Glamour Life Stuff is the minimum requirement. Don't count on that, I can't test it myself.

Errors I know Of

A weird Social - Debug - Bad Mouth interaction. This only appears sometimes.
Complain About doesn't work on Brazilian Portuguese
UPDATE 17/07/2018 Download my Bad Mouth Disabler (Included with the downloads on this post) to fix both issues.

Hello people of MTS, if you know of a mod that adds interactions that go in an unused menu in this mod, such as the Talk.../ category, please PM me the mod and its maker. I can then proceed to ask if they would take the time to add a compatible version. If they say no or they aren't on MTS, there is nothing I can really do about it. If you really know what you are doing, it is possible to tweak their mod so it is compatible, but please use it for personal use only. Don't go and upload it because one, it would violate my policy, and two, it could violate theirs.