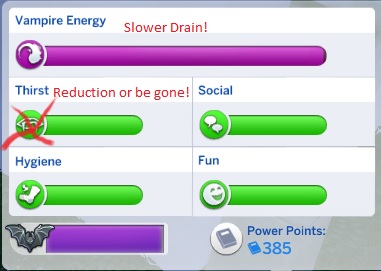 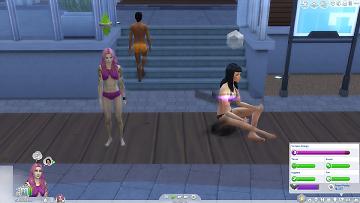 here's where I felt EA could of done a little better.....
1) The Vampire, with all their power, and with use of that power, comes Vampire Energy Drain...
The Problem: NPC And PC vampires alike, use these powers, but wind up with no vampire energy left.
The Solution: Autonomous Vampire Dark Meditation for ALL! No more will a vampire's energy remain low when they are left alone, they will automatically use their Dark Meditation, provided their energy is low enough. Also, when interrupted, you couldn't meditate again till the buff wore off, because EA decided to add it as meditation begins! So instead of forcing you to wait to use it again, I made it so you can meditate again right after getting interrupted, it only refreshes the buff.

Hardly Hungry Trait: WAIT! I can't use this with my Vampire?
Well now I can! A reduction of thirst decay as long as you have the trait. (EA hunger = 50% less, My thirst speed = 75% less) Does not replace EA's Hunger management, only adds thirst management.

Never Weary Trait...EA says normal sim with this trait never get tired... I couldn't do that with vampires, since if all you do is stand around, Vampire Energy doesn't go down, unless you have fear of the sun, that drains the vampire, or a fledgling standing in the sun it's self.(EA Energy reduction 100%.. My Energy Reduction for Vampires = 75%) Reduces the chance of loosing a sim in the sun, Teen gets home from school, and stands in the street like a dork, you notice them moments too late as the reaper comes to claim them... This will give you an extra minute or 2 before they burst into flames. This will ALSO slow down the rate of speed of the energy drain when using vampire powers.

Seldom Sleepy Trait = I decided to add the lower cost trait to the list of traits that should effect Vampires. Energy Reduction for EA is 50%, so I used the same number for Vampire Drain, for anything that effects how fast the drain on the Vampire Energy is. *Sun light without Sun Resistance, Use of Vampire Powers*

Forever FULL = Forever Full, never needing anything to eat OR drink! EA! Come on, seriously! Only for "normal sims"? Well, not anymore, getting this trait for a mere 10,000 Satisfaction points! OUCH! Yeah EA, really caused this one to be costly! It freezes the thirst's decay entirely. And again, I left EA's normal Hunger freeze alone.

Ooo now the fun one, Jungle Adventures! Get your local chat going, and skill it up a bit, before you head off to the jungle! Flip this lever, pull that, compliment some totem face, and before long, you make a wrong move, and snap! You get hit by a poison dart! Ok, no need to panic, just head back to town with some bone dust, and get the antidote. Something tells me these people just want to make things rough for you. As a Human, it freezes ALL motives..

You get turned into a skeleton! That's why your motives are frozen, for 4 days! (56 hours) Problem is, Vampires as a skeleton STILL have Thirst Reduction, and look corny feeding off the local sims to replenish their thirst, which should not be going down! EA! shish-kebab! Ok, I fixed that too! No I did NOT make it so Vampire Energy would not drain as a Skeleton either. Vampire Energy needs to drain when using powers so you can meditate.

Enjoy the game! And happy simming!

Install, same as any mod you add to your game.

Additional Credits:
EA - for Sims 4
Sims4Studio - where I made the mod with.
Other Information