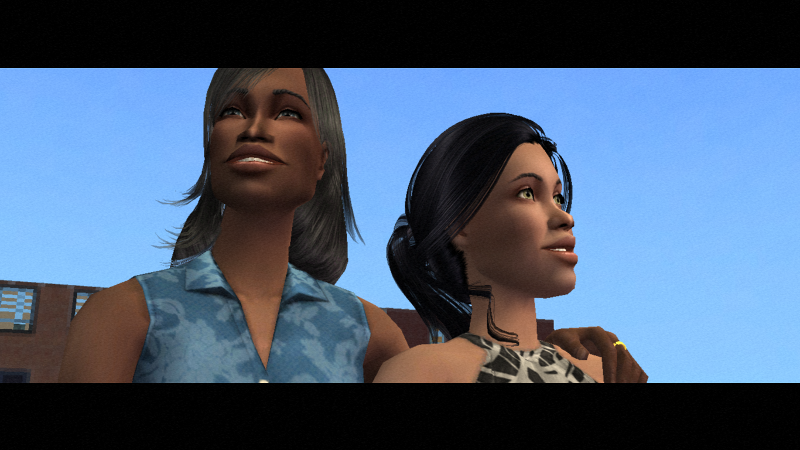 Update: vampires are now ineligible to be in the cinematic, since it takes place at 8 AM. I wasn't able to figure out how to disable the cinematic entirely for vampire teens, so it's up to you to remember to disable cinematics before sending your vampires to college.

Do your sims have absentee dads, or sperm donors, or just parents that they really hate? If so, you've probably seen someone completely inappropriate sending your teens off to college during the entering college cinematic.

Unmodded, the game always chooses the sim with the lowest neighbor ID to be in the cinematic. Since townies are spawned into the game before your born-in-game playables and thus have lower neighbor IDs, this means that it always picks the never-moved-in townie father to be in the cinematic, even though he's probably irrelevant at this point and your teen sim has probably never even met him. If the teen is a child of a pollination technician, no parent may appear even if the other parent is alive and playable.

This hack introduces new requirements for parents for participation in the cinematic:

If only one parent meets these requirements, that parent will be in the cinematic regardless of the value of their neighbor ID.

If neither parent meets these requirements, the teen will do the cinematic alone, even if they have parents who are alive and/or playable.

This hack should work with any hack that doesn't directly affect which parent is chosen for the cinematic, even hacks which mod the teen->YA aging process, college move-in, or even other aspects of the cinematic. It only modifies BHAV 0x100D in group 0x7F1250CD, plus a new TPRP that I generated for labels.

This hack should be compatible with every game configuration with University installed.
Other Information