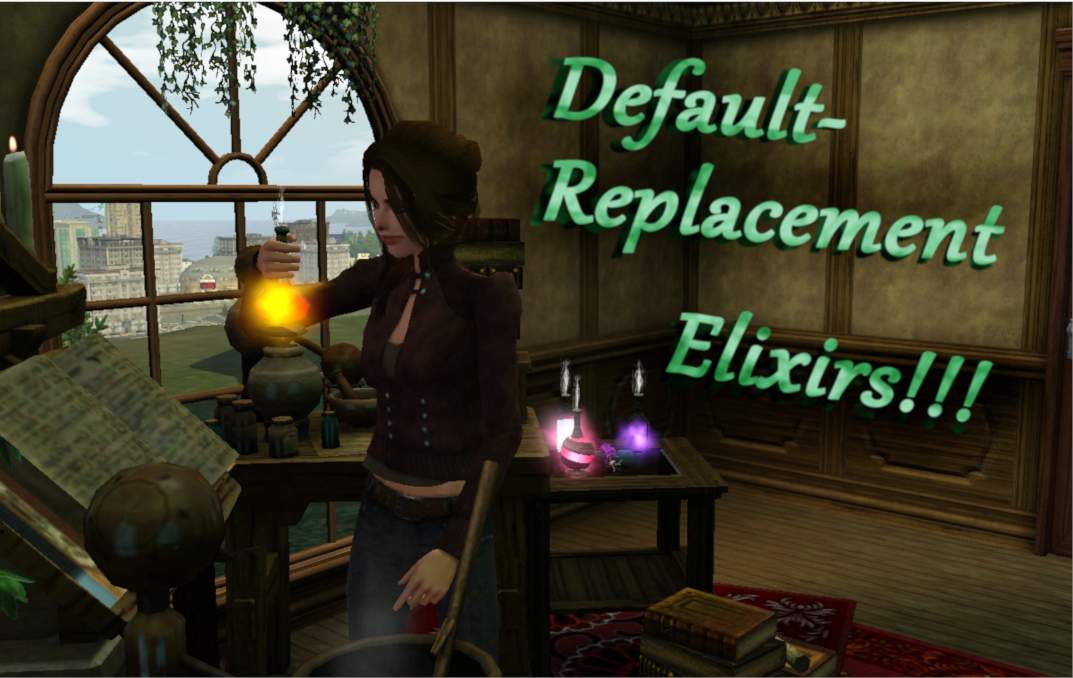 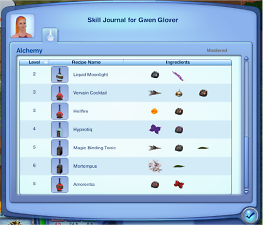 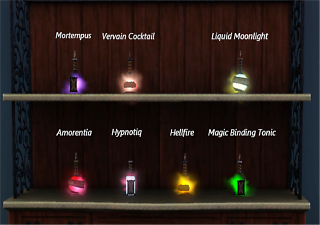 As a lover of fantasy and the supernatural, I enjoy as much variation and excitement as I can when packs like Supernatural come out. The alchemy content in the expansion was great and I love using it, but I felt like there were a lot of similar potions and ones that lacked pizzazz. I'm not quite experienced enough to mod new elixirs into the game, so I decided to override some existing ones and created potions that are a little more useful, in my opinion. All 7 of these new elixirs are learned at the alchemy station and will be available to buy at the consignment shop.

*Using this mod will change certain potions so they function differently*.

Large and In Charge ---- Mortempus

1. Hypnotiq - Take control of anyone's mind with this vial of hypnotic brew. (Applies the Ensorcelled moodlet to the target.)

2. Amorentia - Amorentia is the most powerful love potion in existence. It causes a powerful infatuation or obsession from the drinker. (Applies the Imminent Romance moodlet to the target.)

3. Hellfire - When you need to summon the flames of Hell to punish another, use this elixir to help them warm up. (Applies the On Fire moodlet to the target.)

4. Mortempus - This concoction grants temporary access to the afterlife. Don't get confident, as this doesn't grant immunity to permanent death. (Applies the Temporarily Undead moodlet to the target.)

5. Liquid Moonlight - Whether you need to trigger a lycanthropic transformation or you simply want to aggravate a werewolf, this burst of moonlight will surely do the trick! (Applies the Werewolf and Lunacy moodlet to any werewolf target.)

6. Magic Binding Tonic - Bind the powers of a witch who has abused them with this magic-supressing elixir. (Applies the Magic Depleted moodlet to any witch target.)

7. Vervain Cocktail - A mixture of several vampiric weaknesses that are sure to incapacitate any undead bloodsucker. (Applies various mood failures to any vampire target, such as the Too Much Sun moodlet and reducing the thirst motive.)

Obviously I took some inspiration from Harry Potter, as well as The Vampire Diaries. And Hypnotiq is named after a well-known alcohol.

If anyone has suggestions for other elixirs, I'd like to try making others and possibly figure out how to add new ones, rather than replace them.


This mod overrides the AlchemyRecipes XML found in GameplayData.package, as well as several STBL resources for alchemy potions and will conflict with any mods that alter the same files.


Additional Credits: S3PE for their amazing program~
Other Information