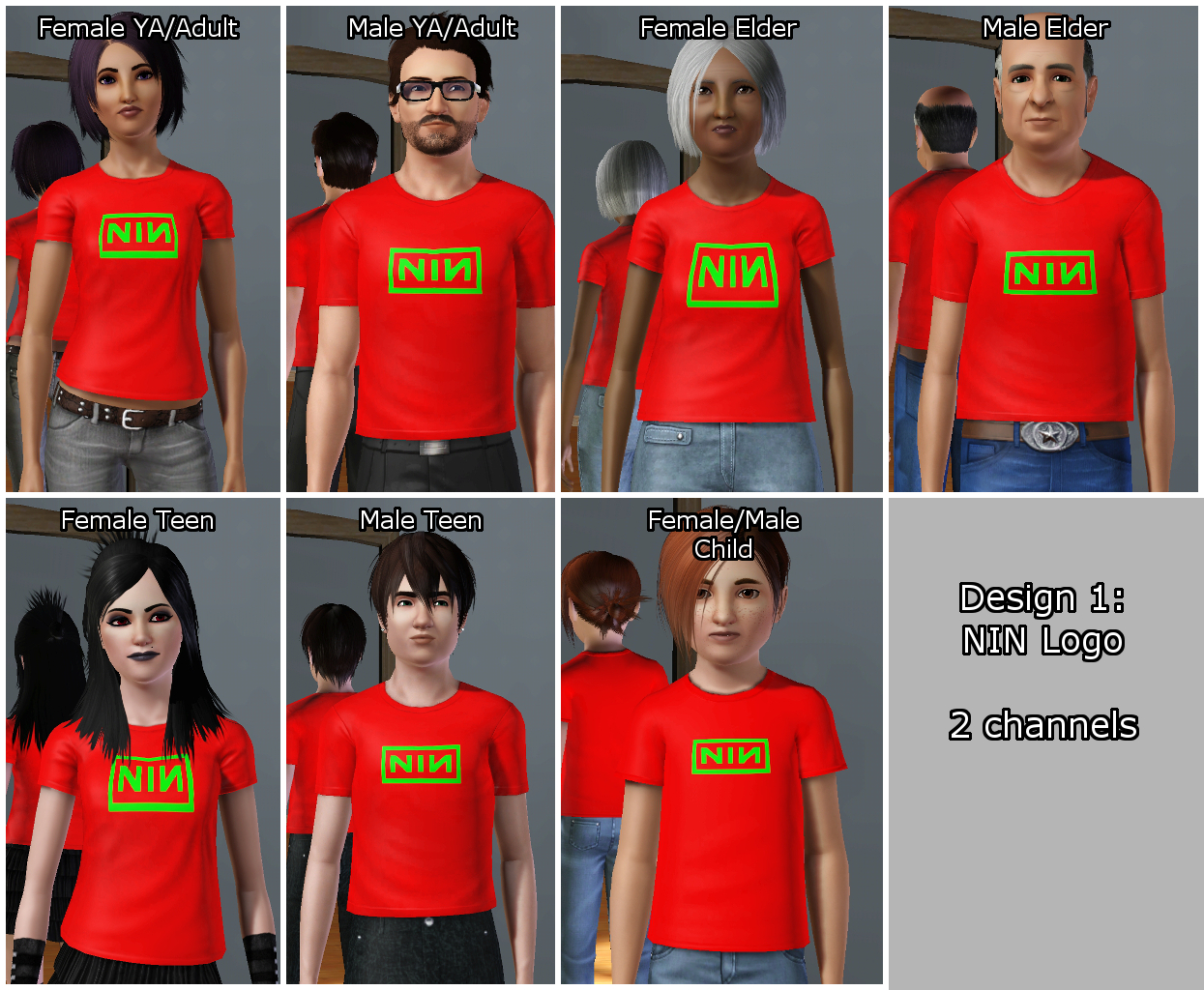 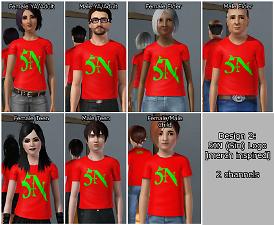 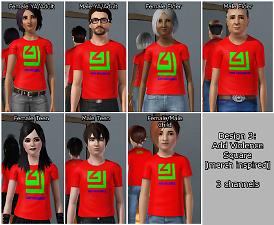 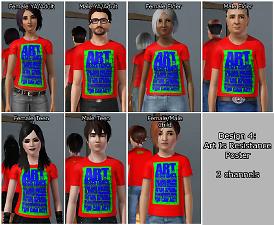 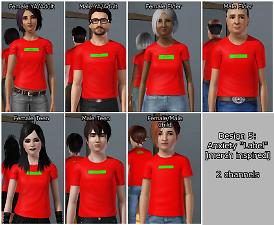 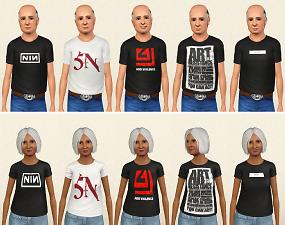 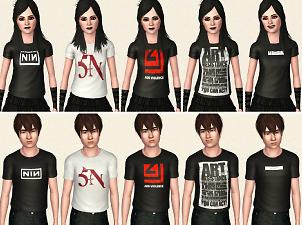 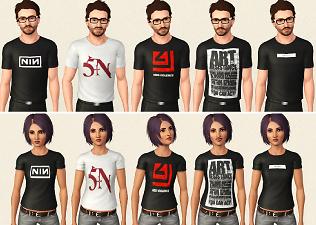 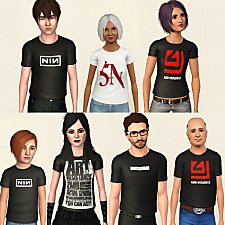 15 Thanks  Thanks     8 Favourited
This is a Maxis Recolour which means that it is a recolour of an item that already exists in your game. Please check the Expansion pack requirements to see which game pack it recolours.

NOTE FOR FELLOW MASTERCONTROLLER USERS: If you're like me and prefer to use the compact form of CAS, you most likely will need to select the NIN Logo shirt then enter Create-a-Style in order to access the other designs shown here.

Hey guys! I'm back after a loooonnggg absence, and with some content too!

This time I'm expressing my love for Nine Inch Nails, my favourite band full-stop. Whether it's the old stuff or the new, I love me some NIN, and thought it'd be cool if some of my Sims could too.

After searching far and wide, though, I couldn't find quite what I was looking for specifically for Sims 3. This made me a little sad, but as soon as I discovered what the CTU was (and honestly I know I'm a few years late :P) I decided I'd make 'em myself, which would also help me get used to the program in case I wanted to make anything else in the future. (possibly even a part two to this with more NIN stuff? who knows?)

Three of the designs have designs similar to items from the official NIN merch store (the SIN/5IN shirt, the Add Violence logo shirt and the Anxiety shirt). The NIN logo shirt I just thought would be common sense for a band tee, and the Art Is Resistance poster-tee is something that I think would make a pretty cool shirt IRL, so I threw it in.

There are versions available for males and females, child to elder (separate .rar files). Additionally, the designs on each shirt were created with masks, not stencils, so that means that every design is fully recolourable (NIN, 5IN and Anxiety have 2-channel CASTability; Add Violence and the Art Is Resistance poster tee both have 3-channel CASTability).

Note: The child Sim in each screenshot is female, but the item itself (in the case of the child version) is a single unisex item. Both male and female child Sims can wear the child version of the top and since it's unisex (and also since the child base body appears to be the same regardless of gender unlike the teen-to-elder base bodies) it will look pretty much exactly the same on a male child Sim.


Known issues:
- The Anxiety tee's design is quite small. I left this alone since I was trying to replicate the original design as much as possible. I'm aware that it is at the cost of some detail loss. I'm considering whether to make a larger version of it as one of the options for a "part 2".
- The Art Is Resistance Poster tee also suffers from the issue of detail loss, though from a different kind as it is a rather "busy" design.

Teen CC
Male hair: Loves to Swim for males by Kijiko
Female lipstick: Cherry Pop (Simply Sweet) by Elexis
Female gloves by Parsimonious (should be at the top of page three, which is the page I have linked)

Young/Adult CC
Male glasses: Emo Squares by robokitty (kittyklan) EDIT 19/07/2018: Since kittyklan appears to have gone under, you can find a bunch of their stuff, including these glasses, here. Thank you to chreai for posting the link in the comments!
Female hair: ButterflySims 062 Retexture by Katty (formerly Paintstroke) [the original version of this hair by ButterflySims is free]
Female lipstick: Bubblegum (Simply Sweet) by Elexis
Female septum piercing: Layerable Piercing Set by Winry


Additional Credits
Huge thanks to Delphy and jonha for the CTU, and also to daluved1 for the Basic Mask Editing Tutorial!

5IN, Anxiety and Add Violence images from NIN.com (or, store.nin.com). NIN logo taken from a vector image on commons.wikimedia.org. The version of the Art Is Resistance poster that I used for that particular design is from nin.wiki.

One last thanks also to Trent Reznor for the existence of Nine Inch Nails.


To get ALL the items shown, download all the .rar files listed. If, e.g, you don't want the child top but you do want the rest, download the other two .rars but not the child one.

In any case, extract the .package files inside to Mods>Packages in My Documents>Electronic Arts>The Sims 3 (or Documents, depending on your PC).

If you need more info, see:
Back to download view
5 Comments / Replies (Who?)