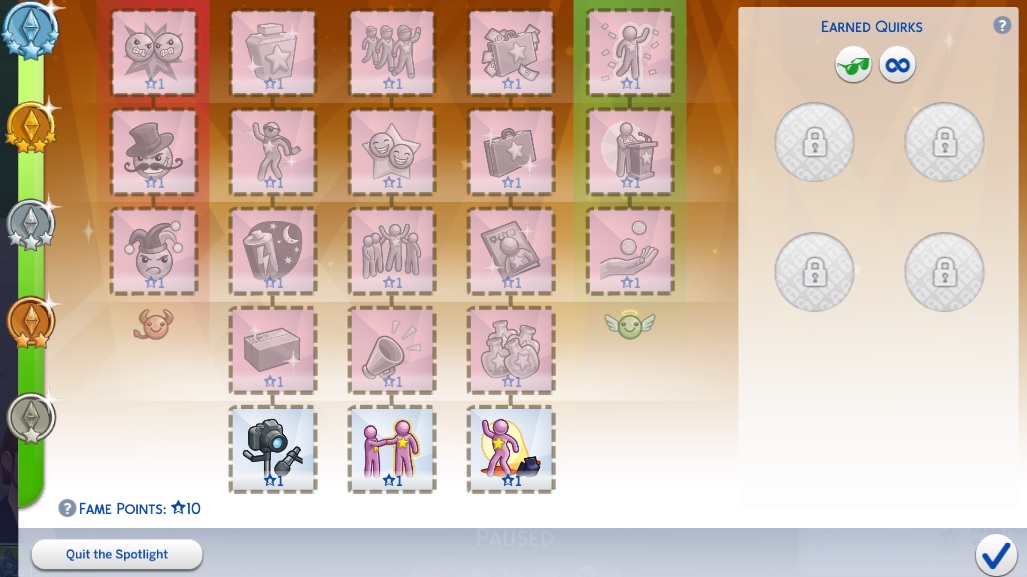 I have edited the Quirk Be Gone potion from the rewards store to remove all unlocked quirk slots. Just buy one and pick a quirk to remove like normally, but it will now also remove all quirks and lock their slots up so no further quirks can be gained. No need to do a celebrity cleanse to get the effects of this mod on an existing famous sim now.


This is a simple tuning mod that makes it so you will never unlock fame quirks.

How it works is that there are four slots for fame quirks to occupy which unlock with levels of fame. You unlock the first one at rank 1 then another at rank 3 and then unlock the final two slots at fame rank 5. I have edited the action tuning that unlocks the slots for quirks to go into to unlock zero slots, so at fame rank 5 you will still never get quirks. Without a slot for a quirk to go into, you will never get one.

Known quirk (pun intended): When you use the Quirk Be Gone potion to remove quirks and slots it will still show the circle with the question mark as if they're still open. As far as I can tell this is just a UI bug and does not truly leave those slots open. The slots will go back to having the padlock symbol on them as soon as you save and reload the game.

This will probably never need to be updated and should be compatible with everything unless another mod edits the amount of quirks you gain or the buff from drinking the Quirk Be Gone potion.