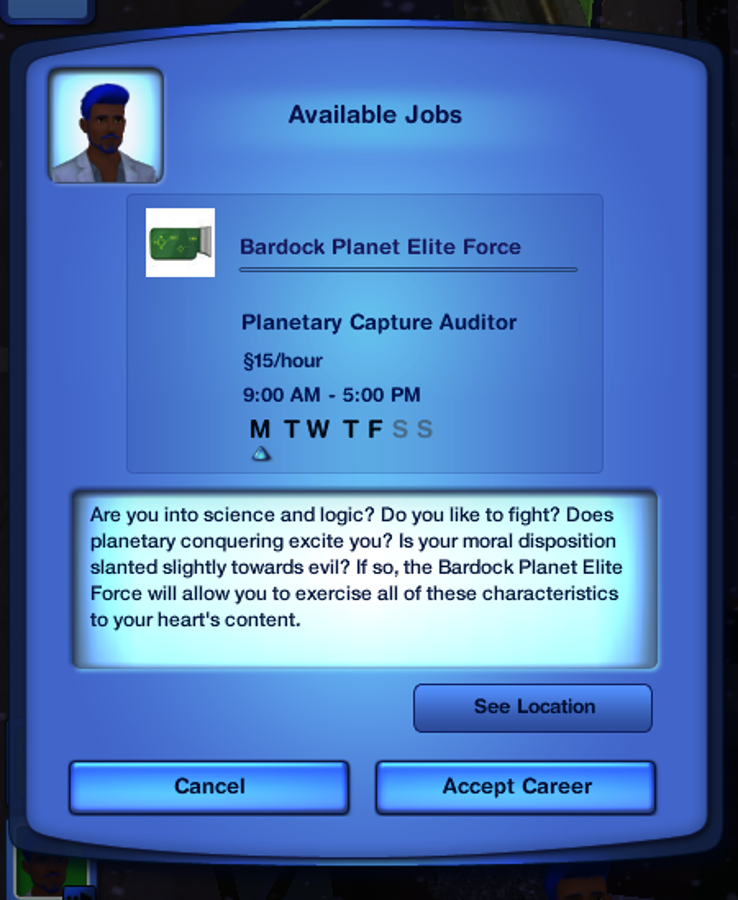 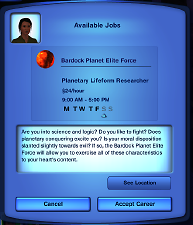 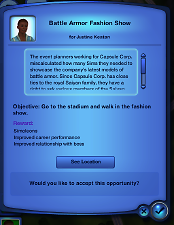 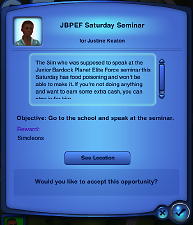 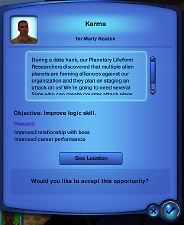 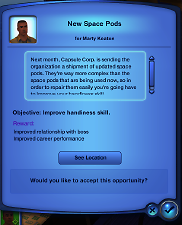 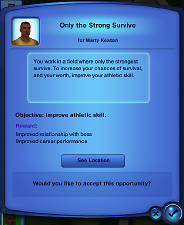 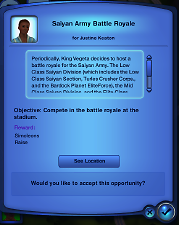 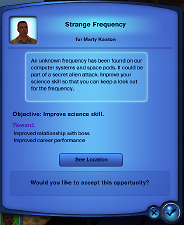 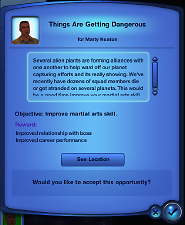 27 Thanks  Thanks     10 Favourited
This download is a custom career. This means that you will need the NRaas Careers mod installed in order to use the download in your game.
Introduction:
This career is based on the Dragon Ball series. Within the series there's an evil organization called the Frieza Force that "employs" the Saiyan Army. Within the Saiyan Army is a Saiyan named Bardock who commands his own squad and they take over planets.

Things That You Need:
This was created with version 1.67 so yours would need to match it or be higher.
nraas Careers Mod (If you're downloading the after school activity, you'll also need the Careers School module.)
World Adventures
University
Generations - For After School Activity

Work Tone Descriptions
Meet Coworkers:
The Elite Force is a serious organization, but not so serious that you can't introduce yourself to your coworkers.

Hang With Coworkers:
When you get to the higher levels in your career, having a good relationship with your coworkers is very important. The problem is that you never know who will make it to those higher levels so its a good idea to be friends with everyone.

Read Space Pod Manual:
Space pods may look small and simple but the engineering needed to create them is out of this world. Reading the space pod manual could be beneficial.

Spar With Squad Members:
Every Elite Force squad member is supposed to be strong fighter. It only makes sense that you yourself would become stronger from sparring with them.

Learn Moves From Squad Members:
Being strong won't do you any good unless you know how to apply that strength. Learn how your squad members use their strength to pull over powerful moves.

Research Elite Force Strategies:
There are tried and proven strategies that the Elite Force uses to capture planets. Instead of learning through try and error, read through the database.

Contact Alien Lifeforms:
Why contact the aliens right before you capture their planet? To learn more about their technology because we're taking that too.

Job Offer:
Are you into science and logic? Do you like to fight? Does planetary conquering excite you? Is your moral disposition slanted slightly towards evil? If so, the Bardock Planet Elite Force will allow you to exercise all of these characteristics to your heart's content.

Job Description:
Before a planet can be submitted to the Frieza Planetary Market, the proper paperwork has to be turned in. As a Planetary Capture Auditor, you need to make sure everything is filled out correctly. If not, there's a chance that planets could be listed twice, the wrong planet could be listed, and a host of other things.

Job Description:
Your job is to research the various lifeforms on each planet marked for capture. Reporting their strengths and weaknesses helps the Elite Force members take over planets with greater ease.

Job Description:
Throughout the day Elite Force members use space pods to travel to and from planets. If the pods stop working in an area where there are no repair shops around, the members will basically be stranded billions of light years away. That's why it's very important that you ensure the pods are in the best shape possible.

Job Description:
Most of the time the Mission Planners do a great job calculating how much supplies is needed for each capture but sometimes they mess up. When this happens, your job is to locate the right Elite Force team and send them emergency supplies.

Job Description:
Mission Planners work together with Elite Force Leaders to plan captures. Knowing what each Elite Force member skills are, how difficult taking the planet will be, and how much resources the organization can spare will help increase the odds of success for each planet capture.

Job Description:
As the 5th Man you are not just the lowest ranking member in your Elite Force squad but you are also the biggest liability. You making a rookie mistake could put the entire capture into jeopardy. That's why Elite Force Leaders force the 5th Man to just carry the supplies.

Job Description:
Even though you are one step up from the bottom, you are still relegated to doing menial tasks for the group, like babysitting the 5th Man and taking out low level enemies.

Job Description:
Having made it to 3rd Man means that you are competent enough to take on more challenging tasks. This is a good thing because you get to be a part of more interesting planet captures. Its also a bad thing because Elite Force Sub Leaders and Leaders will make you do all of the work as the tasks that you view as challenging is light work to them.

Job Description:
You've proven that if something were to happen to the Elite Force Leader, you would be able to step in, capture the planet, and get as many squad members back to base as possible. If you want to command your own squad, you have to be able to strategize and fight on a master level.

Job Description:
You are the Leader of your own Elite Force squad. Looking after yourself is easy but now you have four other Sims to take care of. Knowing your squad members' skill sets and knowing the planet you are capturing can mean the difference between a successful capture and a disaster.

JBPEF Seminar: Levels 1 - 10
The Sim who was supposed to speak at the Junior Bardock Planet Elite Force seminar this Saturday has food poisoning and won't be able to make it. If you're not doing anything and want to earn some extra cash, you can step in for him.

Battle Armor Fashion Show: Levels 1 - 10
The event planners working for Capsule Corp. miscalculated how many Sims they needed to showcase the company's latest models of battle armor. Since Capsule Corp. has close ties to the royal Saiyan family, they have the right to ask various members of the Saiyan Army to do things that are clearly outside of their job descriptions. Are you willing to help fill in?

Only the Strong Survive: Levels 1 - 10
You work in a field where only the strongest survive. To increase your chances of survival, and your worth, improve your athletic skill.

New Space Pods: Level 3
Next month, Capsule Corp. is sending the organization a shipment of updated space pods. They're way more complex than the space pods that are being used now, so in order to repair them easily you're going to have to improve your handiness skill.

Things Are Getting Dangerous: Levels 1 - 10
Several alien planets are forming alliances with one another to help ward off our planet capturing efforts and its really showing. We've recently had dozens of squad members die or get stranded on several planets. This would be a good time to improve your martial arts skill.

Karma: Levels 1 - 10
During a data hack, our Planetary Lifeform Researchers discovered that multiple alien planets are forming alliances against our organization and they plan on staging an attack on us! We're going to need several Sims who can create counter attack plans. Improve your logic and be of service.

Strange Frequency: Levels 2 - 5
An unknown frequency has been found on our computer systems and space pods. It could be part of a secret alien attack. Improve your science skill so that you can't keep a look out for the frequency.

MissyHissy, again - For her Creating After School Activities Tutorial

If you need more info, see:
Back to download view
2 Comments / Replies (Who?)