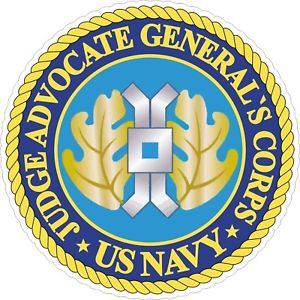 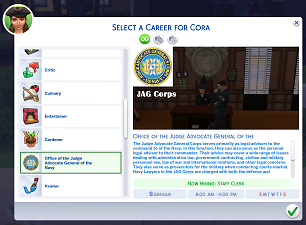 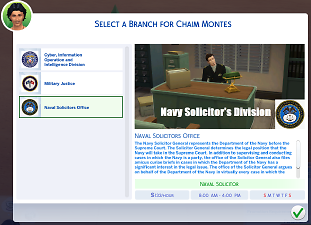 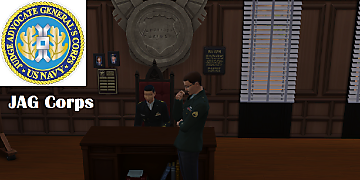 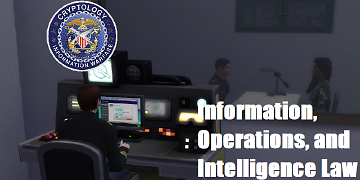 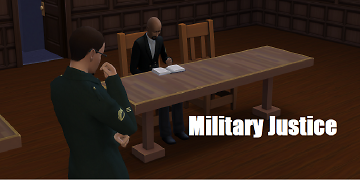 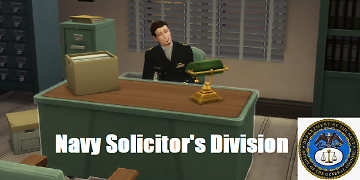 The Judge Advocate General Corps serves primarily as legal advisors to the Command of the Navy. In this function, they can also serve as the personal legal advisor to their commander. Their advice may cover a wide range of issues dealing with administrative law, government contracting, civilian and military personnel law, law of war and international relations, and other legal concerns. They also serve as prosecutors for the military when conducting courts-martial. Navy Lawyers in the JAG Corps are charged with both the defense and prosecution of military law as provided in the Uniform Code of Military Justice. Highly experienced officers of the JAG Corps often serve as military judges in courts-martial and courts of inquiry. Are you ready to defend the Navy and make a name for yourself?

There are 3 branches of this career at the mid point. Starting as a normal JAG officer and Lawyer and then developing into one of the following branches: Naval Solicitor, Information Operations and Intelligence Law, or Military Justice.

Staff Clerk, Â§28/h Monday to Friday
Every case begins with case law, and you are searching and scouring for case files that your superior officers ask for. Organizational skills, knowledge of military regulations, and good relationships with your co-workers will get you noticed.

Legal Counsel Receptionist, Â§36/h Monday to Friday
Someone has to man the phones and arrange the schedule of the Navy Lawyers. Your main task is to calm clients down and make sure they are scheduled to meet with their representation before courts-marshal and other proceedings.

Legal Secretary, Â§52/h Monday to Friday
After showing your skill at managing the office, answering phones, balancing schedules, and making the perfect cup of coffee — you’ve become an important part of the Judge Advocate General’s office staff. Now you are in control of all requisition orders, case law copies, and transcripts of court-marshals to the Judge Advocate General and SECNAV.

Legalman, Â§70/h Monday to Friday
Now you get to go and work with the Navy Lawyers firsthand. As a Legalman you are a Navy Lawyer, learning the law and researching cases to strengthen your case. From small depositions to court-marshal proceedings, you are now defending sailors and the Navy.

Trial Service Officer, Â§113/h Monday to Friday
Courts-marshal as a Navy Prosecutor, a sailor’s defense attorney, and cases where you represent the interests of the Navy in civilian court take up most of your schedule. The inner working of the Navy’s legal system is at your fingertips as you make a name for yourself on Sim Hill.

Naval Solicitor, Â§133/h Monday to Friday
Your service jacket speaks for itself, showing that you have gone above and beyond the duty of the JAG Corps to defend the innocent and prosecute the guilty to the fullest extents of the Uniform Code of Military Justice. The SECNAV has been watching your progression carefully and notices your skills might be more beneficial to the Navy soon.

Solicitor General of the Navy, Â§177/h Monday to Friday
SECNAV and the Judge Advocate General have called upon your skill and appeal to defend the face of the Navy in legal proceedings in civilian court. You represent the entire Navy Department when called upon to go to civilian courts and present your case.

Deputy Judge Advocate General of the Navy, Â§244/h Tuesday to Friday
After all your hard work, you are second in command of the JAG Corps. You have upheld the mission of justice, sat on several court-marshals, and selected the panel of Navy Admirals and Marine Generals. You’ve been promoted to Rear Admiral as well with your new role as Deputy Judge Advocate General of the Navy.

Cyber Division Lawyer, Â§133/h Monday to Friday
Cyber Law Division provides advice and support covering the wide range of legal issues that impact cyberspace operations, from review, application and interpretation of national-level policy and authority to the application of international law, specifically the laws of armed conflict. As cyber law issues cross the spectrum of national security legal practice, the division works with legal counsel for the Joint Staff and the Department of Defense General Counsel's office, as well as coordinating with OJAG's Operational and Intelligence Law Division.

Operations Logistics Lawyer, Â§163/h Tuesday to Friday
With the expansion of Information Operations from five core capabilities (one of which was previously cyber) to a broader spectrum of capabilities, including strategic communications, civil-military operations and intelligence, legal support to such operations has also greatly expanded. In addition to the Division's traditional focus on military information support operations and military deception, the Division provides advice and support to operational judge advocates on the application of domestic law and policy to these activities.

Military Justice
Legal issues unique to military justice include the preservation of good order and discipline, the legality of orders, and appropriate conduct for members of the military. Some states enable their military justice systems to deal with civil offenses committed by their armed forces in some circumstances. The offenses covered by the UCMJ include those encompassed by "high crimes and misdemeanors" which covers officials generally, and includes perjury of oath, abuse of authority, bribery, intimidation, misuse of assets, failure to supervise, dereliction of duty, conduct unbecoming, and refusal to obey a lawful order. It also includes ordinary crimes, but perhaps with different standards of proof and punishment than for civilians, on the grounds that more is expected of military personnel by their oaths of office. Many of the terms used date back to the era during which the code was written. Your job is to uphold the law, and defend the innocent while maintaining the integrity of the Department of the Navy.

Chief Justice of the Court of Criminal Appeals, Â§163/h Wed, Thurs, Fri, Sat
Pursuant to the statutory authorities listed below, the NMCCA reviews courts-martial in which the sentence includes a punitive discharge, confinement of one year or more, or death; interlocutory appeals by the government; sub-jurisdictional cases sent to the Court by the Judge Advocate of the Navy; petitions for new trials; and extraordinary writs filed under the All Writs Act.

Assistant Judge Advocate General, Chief Justice of the Navy, Â§185/h Mon, Tues, Wed, Fri, Sat
The AJAG, Chief Judge, Department the Navy, oversees the worldwide Department of the Navy “Judicial Enterprise”; is the reporting senior for the Chief Judge of the Trial Judiciary and the judges of the Navy-Marine Corps Courts of Criminal Appeals (NMCCA); is the principal strategic planner for professional development, selection, training, and deployment of the judiciary; oversees all inquiries into judicial misconduct; serves as the Navy’s judicial representative on the Code Committee; serves as the Chairman of the Judicial Screening Board; is the principal strategic planner and community sponsor for the military justice litigation career track, and is the principal advisor for courtroom design and judicial security.

Deputy Judge Advocate General of the Navy, Â§275/h Mon, Wed, Fri, Sat
After all your hard work, you are second in command of the JAG Corps. You have upheld the mission of justice, sat on several court-marshals, and selected the panel of Navy Admirals and Marine Generals. You’ve been promoted to Rear Admiral as well with your new role as Deputy Judge Advocate General of the Navy.


Tthere will be updates to the career AS NEEDED. Please be sure to enter comments about the bugs and glitches in the comments as they occur so that I can fix them quickly!
Thank you!

REMOVED both Versions of Career. New Updated Career files are proper translations in French and German and corrections to English made by Google Auto-Translating the Career Maker Page.