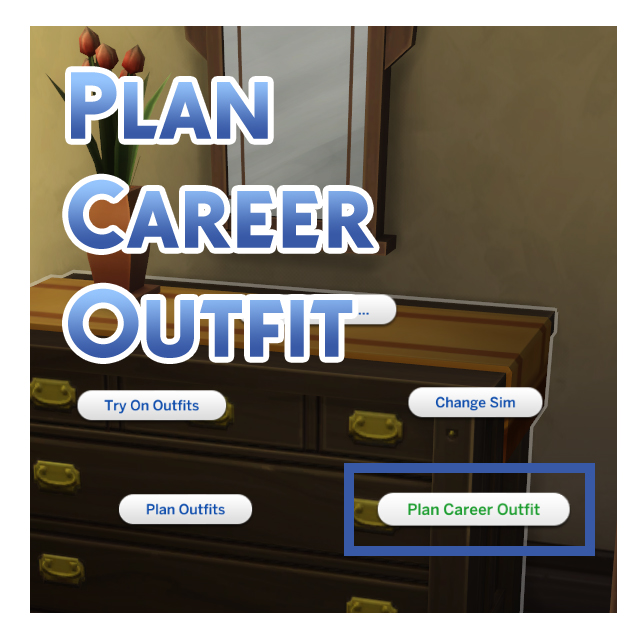 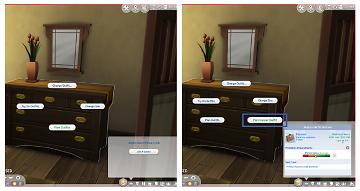 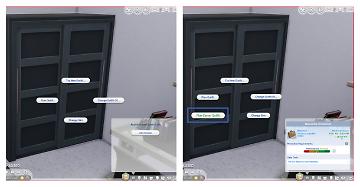 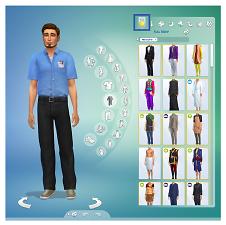 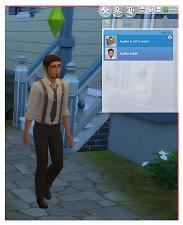 Created by Menaceman44
View Policy / About Me View all Downloads
Uploaded: 12th Apr 2019 at 8:53 PM
Updated: 17th Apr 2022 at 9:58 PM
Description
A long time ago I used to use a mod by Zerbu that allowed players to change the career outfit that gets assigned by the game when you join a job. I used it mostly to give glasses back to my spectacled Sims while at work but I could also change other parts of their outfit if I liked. Sadly, Zerbu's mod stopped working a long time ago and he's never gone back to update it so here we are today with my attempt to recreate that mod.

This mod REQUIRES Scumbumbo's XML Injector in order to function. Make sure you go download that as well or this mod won't work.

This mod will add a new Plan Career Outfit interaction to all mirrors, dressers, and Get Together closets. It will also be added to any other object that already has the Change Sim interaction so this means it will automatically work for Custom Content creations as well. Hurrah!

The interaction is only available to Sims who are currently employed in a job that grants a uniform and aged Teen and above.

When you select Plan Career Outfit your Sim will walk to the clicked on object and be taken into CAS where they will appear in their current career outfit. There won't be a special Career category and instead the Everyday tab will be selected. Make sure not to change the clothing category or the changes will be applied to the Everyday outfit instead.

When happy with your changes, exit CAS as you normally would by clicking on the tick icon. The next time your Sim leaves for work they will now be wearing your new chosen outfit.

Many thanks to Andrew over at the Sims 4 Studio forums for initially helping me to get the employment check working.

Notes
You will REQUIRE Scumbumbo's XML Injector for this mod to function. Ensure you have script mods enabled.

You may also like to make use of emilypl27's Change Into Career Outfit Whenever mod which allows you to dress your Sim in their career outfit any time you like. I highly reccommend it.

No in-game tuning is overridden.

If a Sim with multiple jobs uses this interaction it will only allow you to alter the uniform of the most recently aquired job.

As of March 2022 this interaction no longer appears to work for Sims in part-time jobs. While the uniform can be altered, it will be instantly replaced with the original uniform the next time the Sims leaves for work.

This mod does not unlock any of the career outfits for use in CAS. As a result, if you remove the career outfit assigned by the game and then save a new outfit you cannot re-assign the old outfit without getting your Sim to quit their job and rejoin. (Or use a mod that unlocks career outfits.)

The interaction doesn't work for Child Sims. If enabled, once they enter CAS there is no way to get them out since the game loads them on their own but insists a Teen or higher must be included to allow you to exit CAS.

I have attempted to translate the interaction into all languages supported by the game with the use of Google Translate. If the translations are wrong, please provide the correct translation and what language it is for and I will gladly update the package.

UPDATE 01/08/19
I have now managed to fix the issue with semi-active careers. The mod previously was running a test to see if a Sim was in a quittable career to determine if the interaction should show for them. This meant that even if the game hadn't given them a uniform, you could still attempt to change one which would fail. The game now uses a test to see if a Sim already has a career uniform or not instead so the option will only be available if a Sim already has a uniform available to change. So if you find that your Sims in semi-active careers have no option to plan their career outfit it simply means they haven't reached a level to be assigned one yet.
I have also updated the Spanish translation thanks to Shalazar.

You will require Scumbumbo's XML Injector to use this mod.

Scumbumbo's XML Injector
Change Into Career Outfit Whenever
Back to top