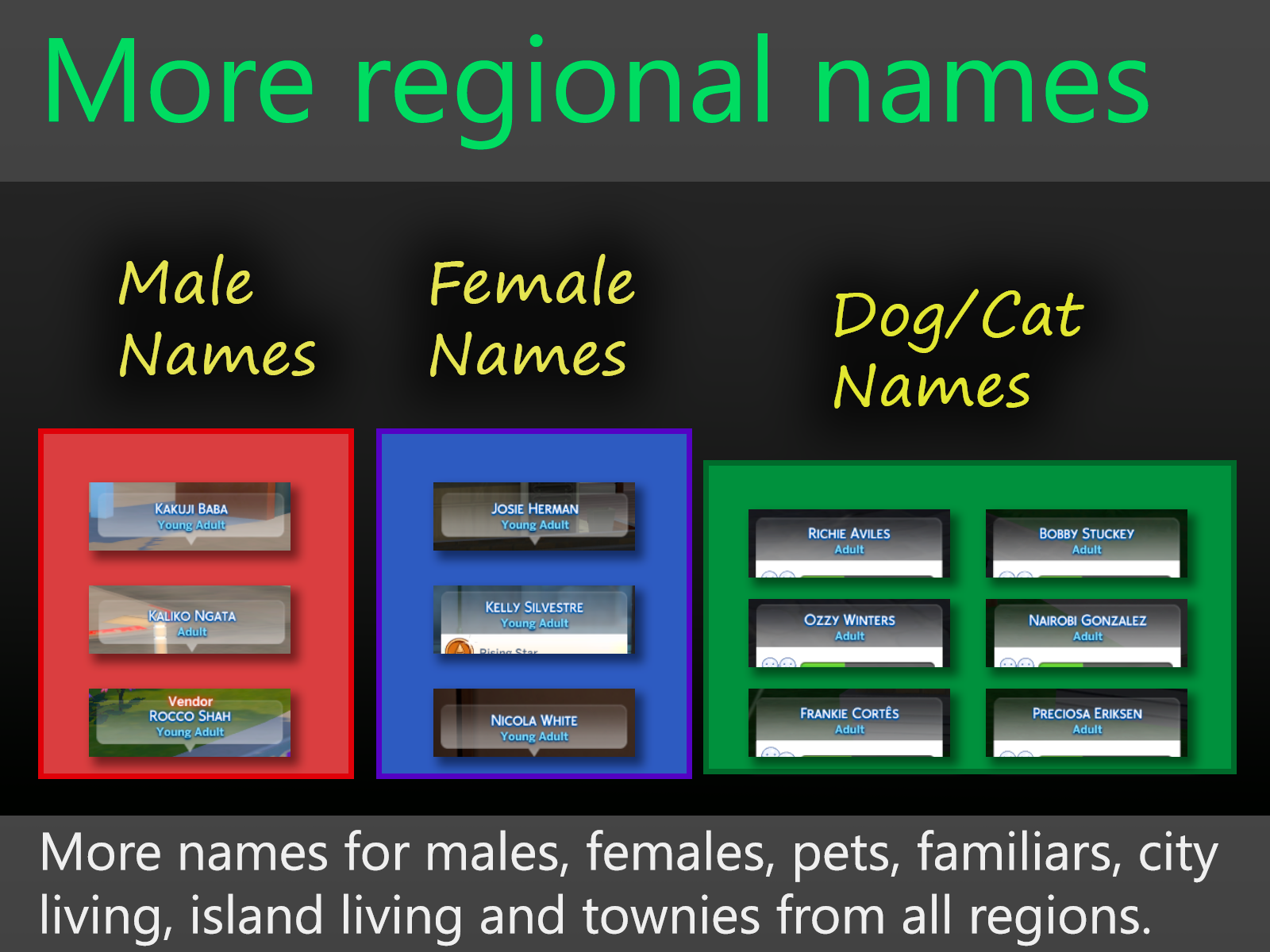 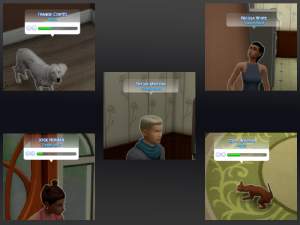 You NEED the last game version (or at least a game version compatible with this mod's last dlc update) otherwise it will have glitches like missing last names or everyone being called the same thing.

Update changes
1.6: Updated for Cottage Living.
Added more Fox names
Removed "townies and" from this mod name because this mod name is a mess. (File name is still the same)

1.41: Added 77 new names for Plopsy based on other games, a bit of spam and random stuff.

1.4: Updated for the knitting pack. For now, all nicknames on Plopsy will use the english names. I don't want to keep it, since they did a very good job on the amount (something like 125) and it have a good job on localization too.
Update: Because the way I did the code to work for everyone, I can't made it, the mod was reaching over 500.000 lines of code and becoming a mess.

1.21: Hotfix, somehow I messed up with the familiar Owl not using it's name properly (now fixed) and changed the reference number from 13 to 0 (game default) to prevent any other language name to accidently load.

I'm not updating the new names on the post because it's ready too long.

1.12: Updated with even more new names, more name and script cleaning. I think this will be the last version for 1.58 patch.

1.11: Cleaned some weird and duplicated names, added new chinese, japanese and korean names for everyone. (Around 700 for males, 600 for females and 70 last names)

1.1: Updated to version 1.58 (Make sure to have this version, otherwise you can have conflicts.)
Now it also have more robots names.
Apparently, the game have a bug where the random button uses human names in robots, so... it will work only in random ones.


Description
Bored when you look to a townie name or try randomizing it and it have the same name and last name all the time? This mod will help you with that! It will add more names to the random button (for humans, pets, robots...) and to the townies of your game from all around the world, like French, Itallian, english, latinos and others names with compatibility to all game languages


Content
It have mainly English, French, Asian, Italian and Latino names, but still have from the other ones.
It have:
4603 female names
3692 male names
8069 last names
600 pet names
More names for each familiar (just a fusion of some names from all regions with some filtering)
450 Island Living male, female and last names (for the npcs generated on Island Living)
2200 indian, latin, morrocan and japanese names (not sure where the game use it, I guess City Living and Jungle Adventures.)
120 skeletons names and last names
More names for robots

(Some names will still looks weird, mainly because the game generate sims with special names for some specific reasons.)

But what names it have?


Female Cats and Dogs
(It's almost the same with small differences, version 1.32 add more different names for each.)

Male Cats and Dogs
(It's almost the same with small differences, version 1.32 add more different names for each.)


Cats and Dogs use the same last names of the humans.
There's more names for Familiars, skeletons, DLC stuff and etc but I decided to leave it to not make this a Spoiler button mess.

Performance
It don't seems to lag anything in my game, but games with a weak processors may have issues in generating new sims and clicking the random button.
Other Information