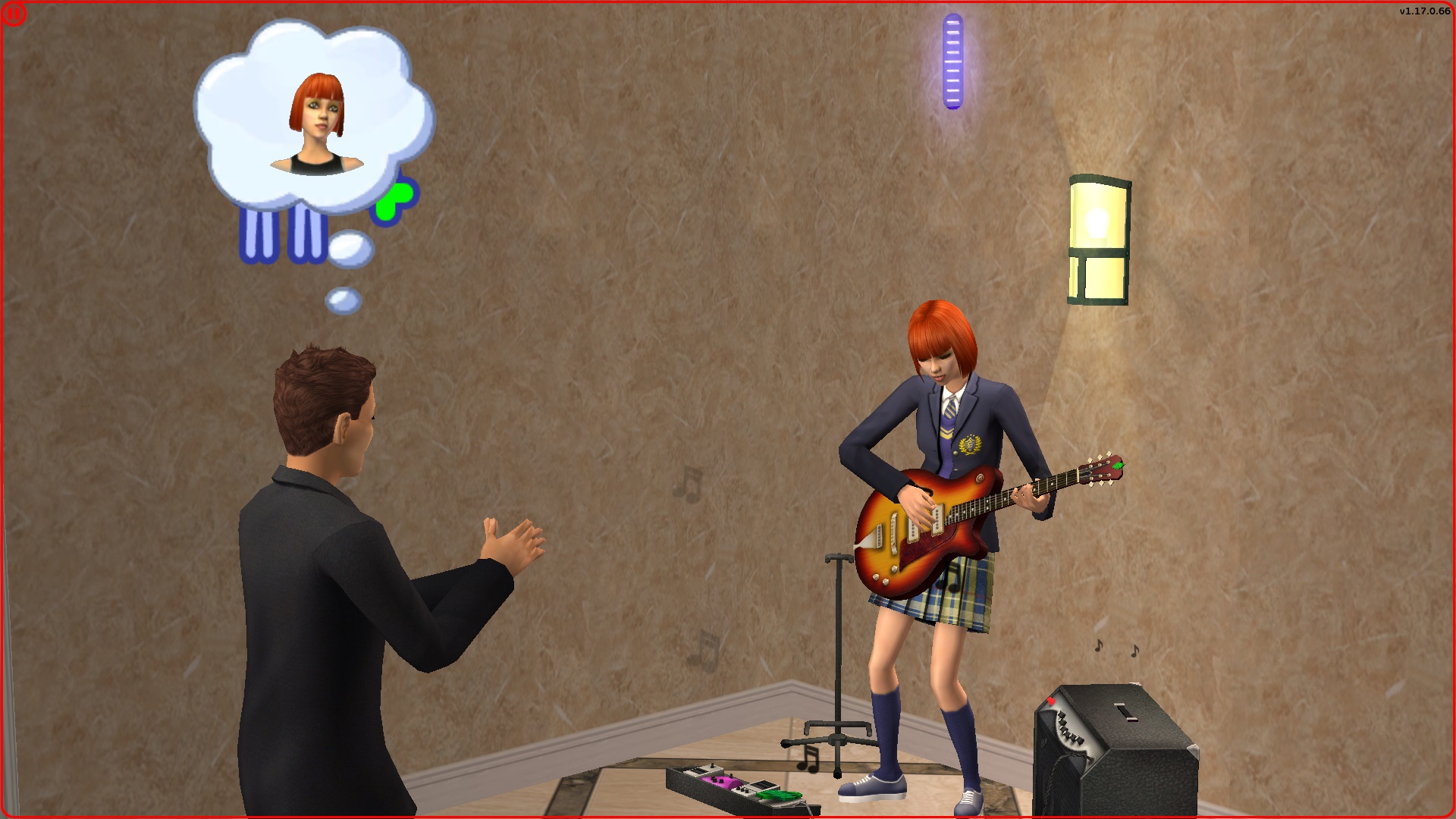 Dance Mod: This is a mod that fixes many issues with dance interactions in the Sims 2. It also changes the way many dance interactions work.
- Sims dance behind the Freetime DJ booth in an unmodded game. This has been fixed.
- If sims autonomously initiate the Smustle, Hula and Slap dances, they don't route towards the stereo and they start dancing wherever they currently are. This has been fixed, they will now route close to the stereo before starting to dance. Similarly, if the player orders a sim to dance Smutle, Hula or Slap to a DJ booth, sims will route extremely close to the booth and start dancing with half of their body clipping into the booth. This has also been fixed. Sims can now satisfy DJ booth wants on the Freetime DJ booth, too.
- Sims increase their dance skill extremely quickly in this game, which I dislike. This mod heavily slows down the rate at which sims increase their Dance skill, and bases the rate on their Active personality, and their Body and Creativity skills. In addition, if there is a DJ currently using a DJ booth in the same room, then the sim's rate of increasing their dance skill is boosted further depending on the DJ's Creativity skill and Music and Dance enthusiasm.
- When sims are performing the Dance Together interaction, they will now increase their Body Temperature up to a certain limit. While Sim A and B are performing the Dance Together, Classic Dance and Slow Dance interactions, they will have a chance to increase their STR and/or LTR towards each other every loop depending on their own Music and Dance enthusiasm, and also on the Dance skill of the sim they are dancing with. If both sims have high Dance skill, they can now make friends just by dancing with each other. Maxis should've fixed these interactions themselves, because obviously continous interactions like dancing should increase the sims' relationship every loop, rather than by a fixed amount at the end of the interaction.
There is a Romantic Standards Version of this mod. The only difference in this version is that Sim A has a chance depending on their Music and Dance enthusiasm to get a crush towards Sim B while they are performing the Dance Together interaction.
UPDATE 1: When a sim stops goofy-dancing, the game immediately deletes its emitter, which causes sims who are currently reacting to the goofy-dancing sim to be reset by the game without an error. This update fixes this issue by making the sim continue goofy-dancing until all other sims stop reacting. This update also makes it so that only sims who are currently facing the goofy-dancing sim can react.
UPDATE 2: This update fixes a large number of issues with instruments which are being played on a stage. In an unmodded game, sims route onto the stage in order to dance to the instrument. This includes dancing solo, smustle, hula and slap. This update makes it so that sims will try to find an available place below the stage to dance. This feature is only enabled for instruments, but not for stereos, DJ booths or karaoke machines, because the player may want to construct a dancing stage.
UPDATE 3:
- When a sim initiates the Dance interaction on an instrument, the game checks to see if there are any other sims interacting with the same instrument with whom the sim has good relationship, and if so the game can make the sim dance near that sim. However, the game also considers the instrument player and doesn't have any checks for stages, so it was still possible for sims to get on the stage to dance near the instrument player. This has been fixed, and the game will skip instrument players as potential dance partners now.
- Fixed an error from the previous update.
UPDATE 4: I found out that the game doesn't allow sims to dance to instruments autonomously if the instrument and the sim aren't in the same room, which also prevents sims from autonomously dancing to instruments if the instrument is on a stage and the sim is not. This update fixes this and now sims can autonomously dance to instruments which are on a stage.
UPDATE 5: DJ Booths may be stuck in use in an unmodded game if the DJ who was using the booth was an employee who stopped using the booth in order to leave the lot for any reason. This update fixes that.
UPDATE 6: Fixed an error that would happen when a sim tried to dance to a DJ booth which an OFB employee was assigned to.
UPDATE 7: I found out that the goofy dance emitter is not properly coded and causes routing sims to play the incorrect routing animations. This is most visible when a sim finishes scaling a staircase, because the goofy dance emitter causes the sim to stop and perform a standing animation even though the sim is still routing, which then causes the sim to teleport to their destination. This update fixes this.
UPDATE 8: There is an issue in the game which causes an error whenever Sim A initiates the Dance Together interaction towards Sim B, and if Sim B is currently routing towards a stereo in order to Dance Solo, and if Sim B's personality and dance skill is suitable for the game to force Sim B to goofy dance when the sim gets to their destination. In such a case, the game throws the error and resets the sims. This update fixes this error.
Requirement: Apartment Life.

Instrument Sit Watch Mod: In an unmodded game, when a sim attempts to watch an instrument player, the game only allows the sim to sit on a dining chair within a certain range. In addition, if the sim is already sitting on a dining chair when they try to watch an instrument player, the game allows the sim to remain in their current seat as long as the seat is within the preset range, even if the seat is in a different room. This mod fixes this, and allows sims to sit on dining chairs, living chairs and sofas.
Requirement: Apartment Life.
Resources: Route - Watch - Try to Sit/0x7F449F3B/0x00002040

You need the latest version of 7zip or WinRAR to get these mods.
Files Need help with downloading or installing content? Click here!

– Object Mods : Object Interaction Mods (things that change how sims interact with objects or their environment, like "Multi-owner door" or "sunbathe anywhere")
– Global Mods : Mods that change the way the game works without requiring any user intervention.
Tags