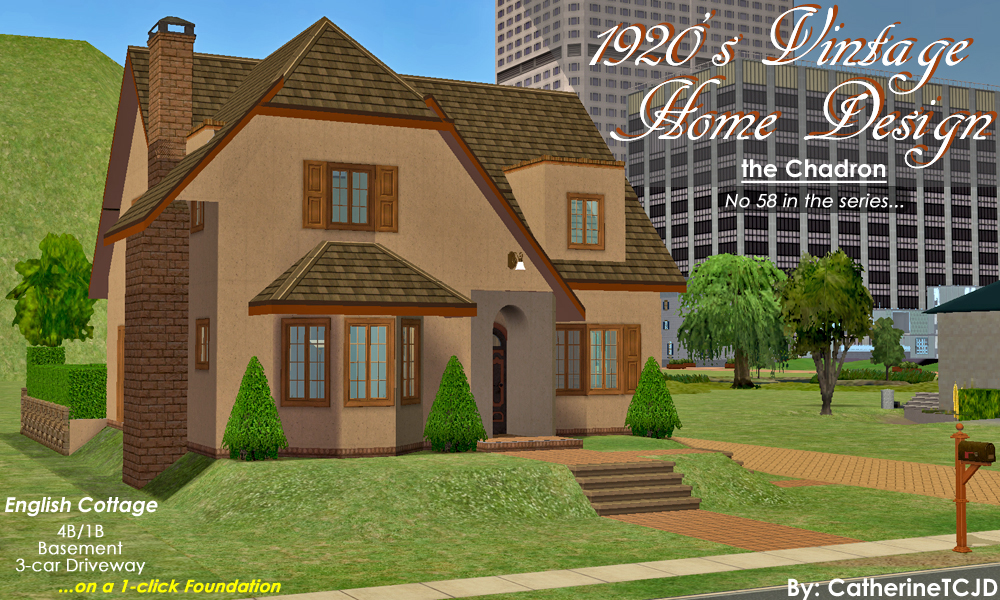 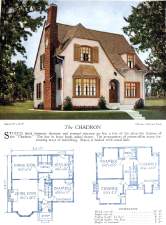 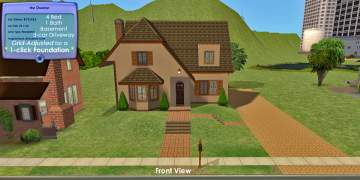 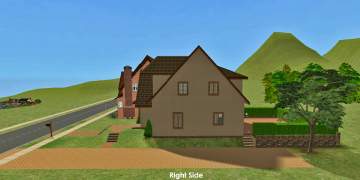 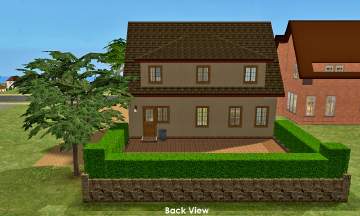 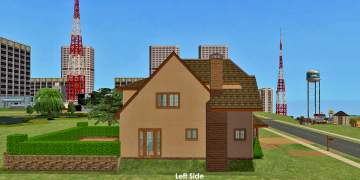 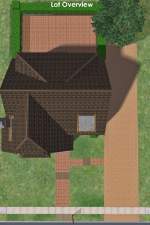 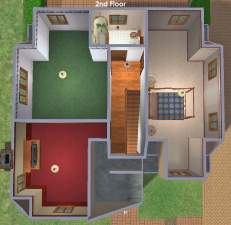 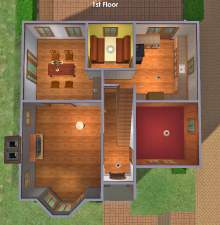 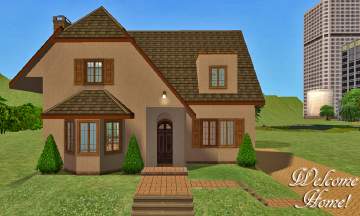 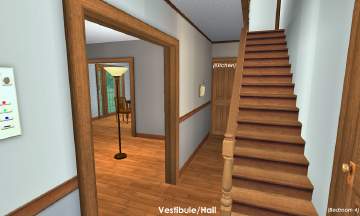 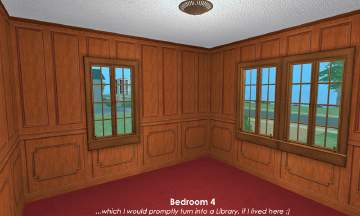 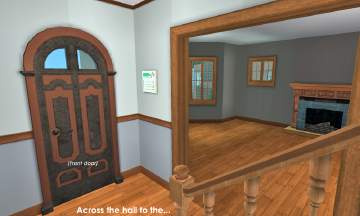 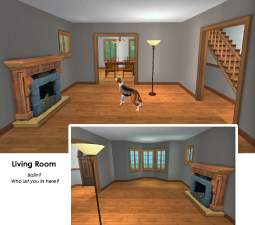 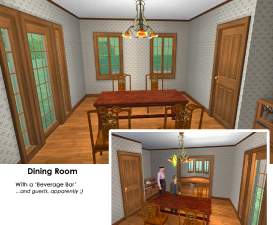 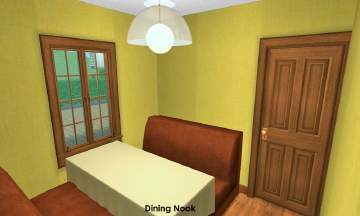 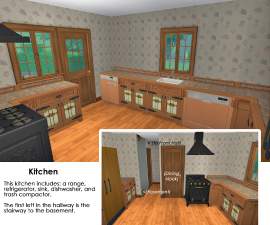 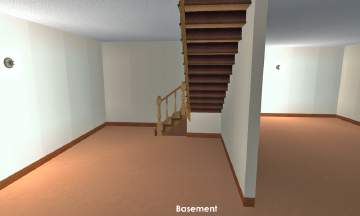 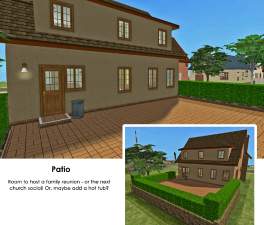 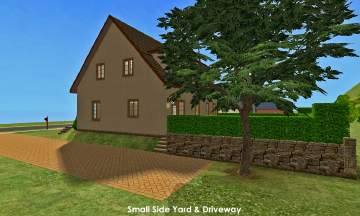 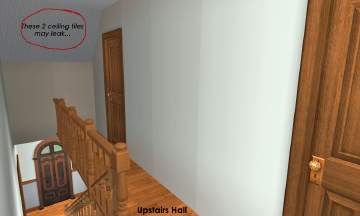 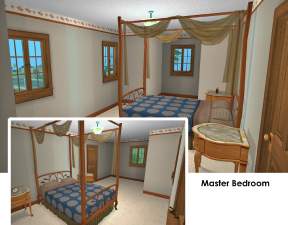 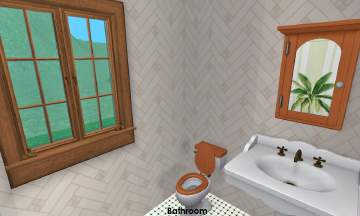 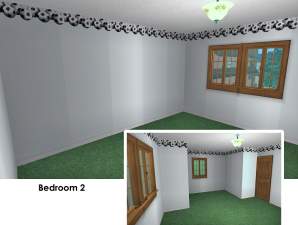 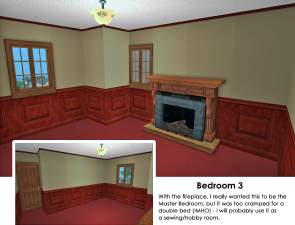 34 Thanks  Thanks     9 Favourited
The fifty-eighth house in my "1920s Series" - inspired by 62 Beautiful Vintage Home Designs from the 1920s - is the "Chadron," another English Cottage - this time with four bedrooms. As the brochure says, "7 Rooms, Bath and Nook." The 'Nook' refers to a dining booth located between the kitchen and dining room. The brochure further tells us that "Stucco, brick chimney, shutters, and recessed entrance are but a few of the attractive features of the Chadron. The bay in front lends added charm. The arrangement of rooms offers many fascinating ways of furnishing. Stucco is backed with metal lath." ...I'm not sure about the metal lath, but everything else is duly checked!

What the brochure fails to mention is the booby-trapped roof. *sigh*

Yes, this is another of those 'OMG! Don't touch the roof' houses. The front left corner being the main culprit (around the chimney.) As the original picture indicates, I really wanted to have windows on both sides of the chimney AND have the swoopy roof bit along the front. I finally hammered it into some sort of shape, but the front-most window - from inside - has a beautiful view of the underside of the roof. So, I would suggest playing this house with the roof off. None of the rooms leak. But, there may be a leak in the front two ceiling tiles of the staircase - I've marked it in the pictures.

This lot has been adjusted with Mootilda's GridAdjuster to have a cute little 1-click foundation.
AND it has a basement (a regular dug-out basement, not a no-slope/page-down-to-the-Nether basement.)
It is also Big Dog approved - thank you Balin for being such a good sport! He (and his BFFs, the Goodies) have been patiently moving in-and-out of houses, testing, testing, testing... for this whole series. I think they are very glad it's almost over

I wonder which house they will choose for their own? 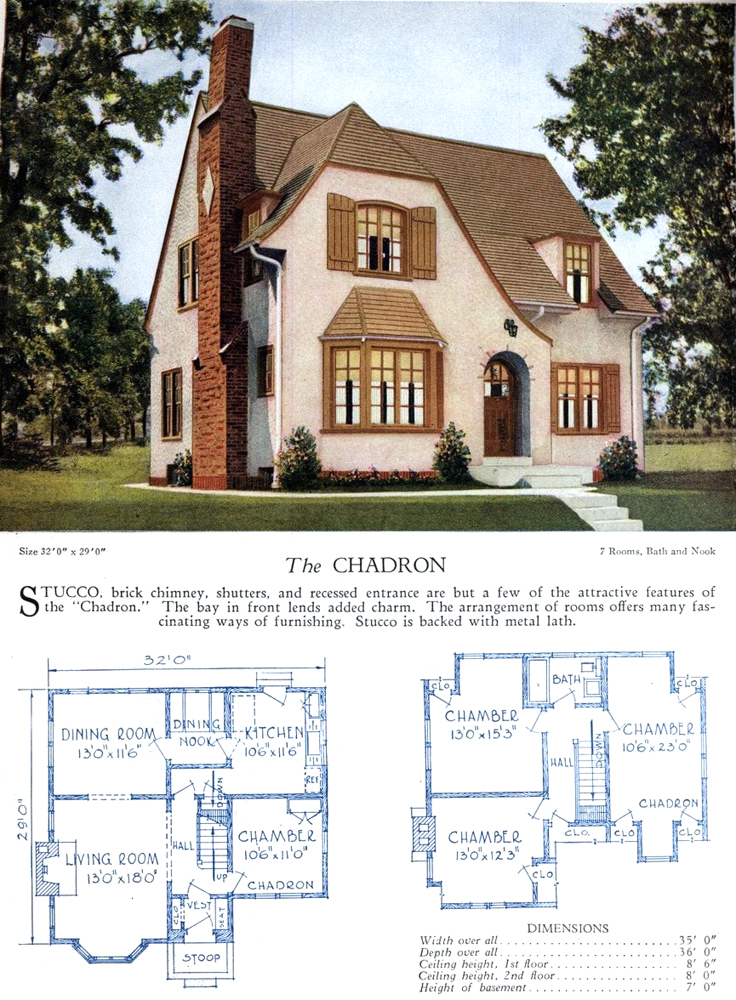 I had to make one semi-major architectural change to this plan... There is no 'Vestibule'. The front door opens directly to the hall. I did this to preserve the 'recessed entrance' feature. I hope your sims won't mind too much

Please scroll through all the above pictures to see everything this house has to offer. Furniture includes a double bed, two nightstands (one with an alarm clock,) beverage bar, nook dining booth, and the dining table. All appliances, plumbing and lighting are included. The telephone is on the wall in the front hall. The front door is burglar alarmed. The range and both fireplaces have smoke alarms. 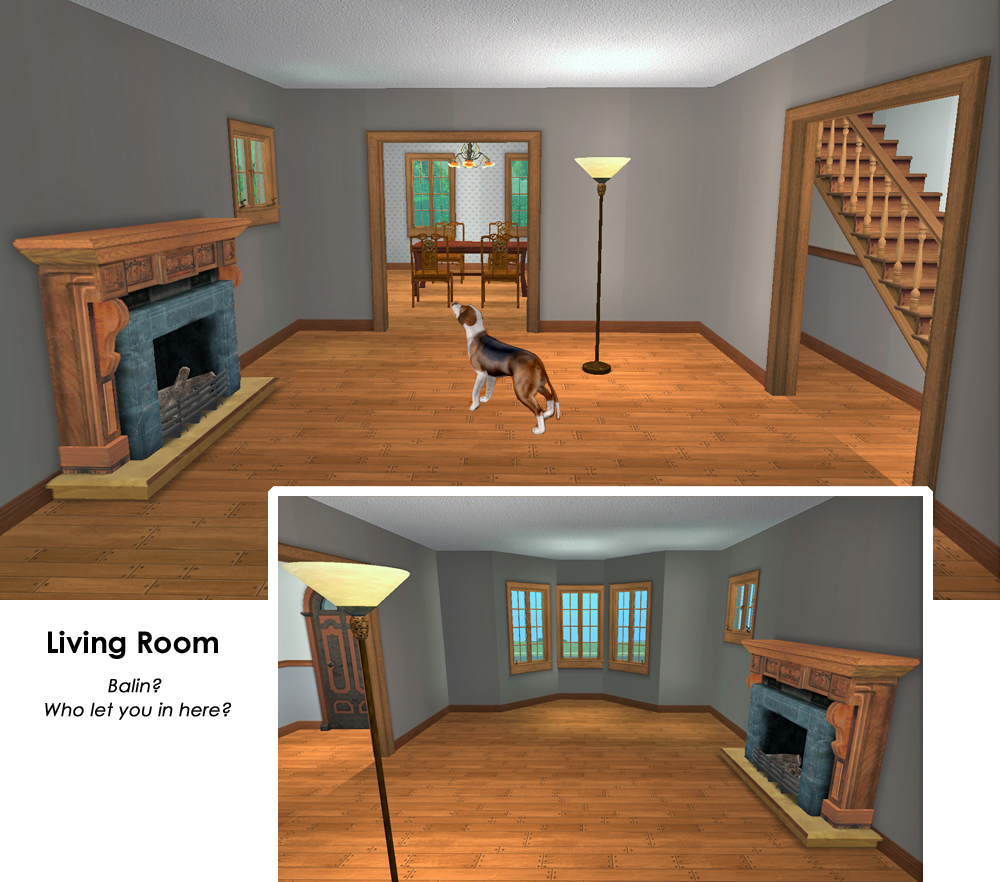 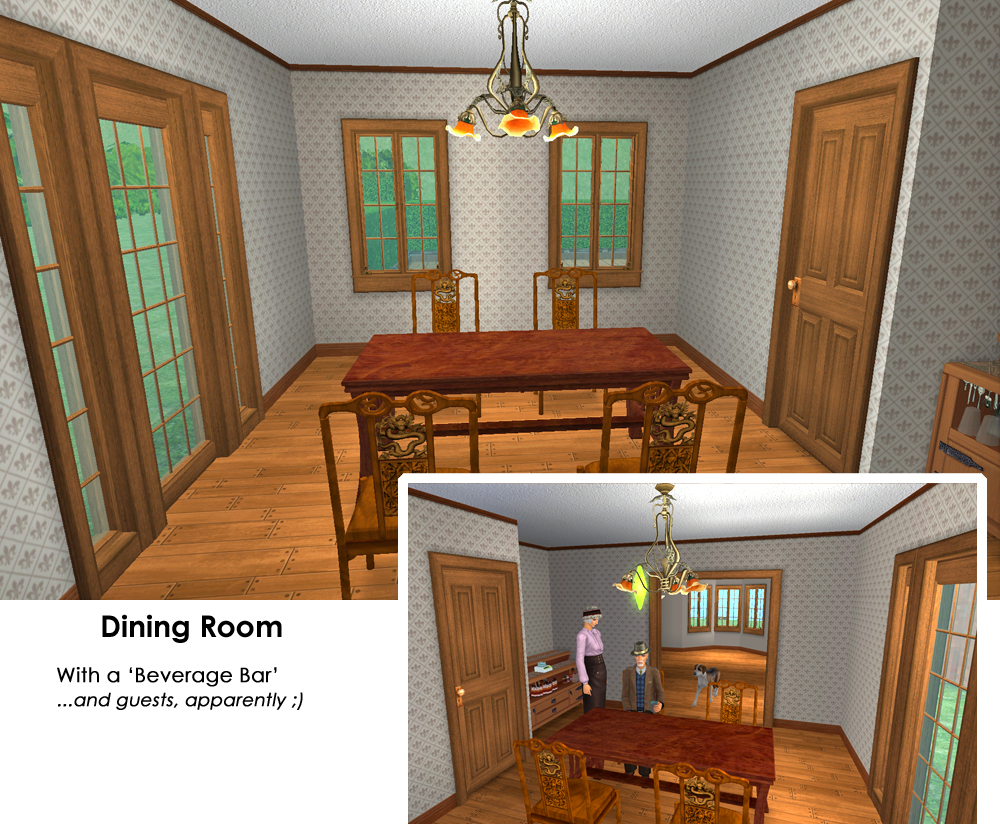 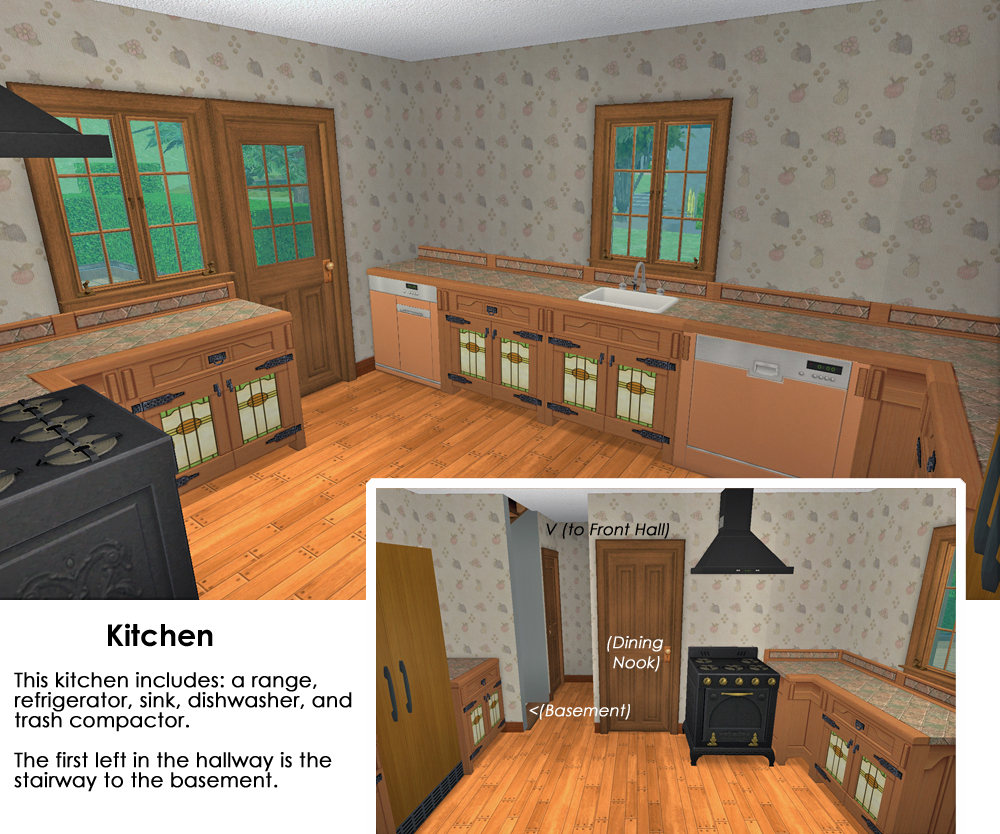 This is a clean copy of this house/lot; no sim has ever lived here. The package has been cleaned with Mootilda's Clean Installer. Pictures were taken with Invisible Fire Alarms in place, but the lot is packaged without that mod. So, you will see the fire alarm over the range in the kitchen and over both of the fireplaces - one in the living room, and one in the upstairs third bedroom.

There is parking for three vehicles on the long brick driveway.

- Unlevel Wall - #90 by Numenor @ MTS2 - used to fix wonky wall issues. Some people weren't sure how to install this wall... Click the info button down below to see how I did it

...and I highly recommend getting:
- Invisible Smoke Alarm by pfish @ MTS2

Standard mods I use that are not necessary nor included - but were probably used whilst building/photo-ing/prepping this house for upload...

If you don't already have it, go get and install the Scriptorium by Numenor - it makes it super easy to install Modular Stairs, Fireplaces, Custom Walls, Lights/lamp mods (You can read about the what/why/how of it on his post) To sum up - all these items use scripts to work properly in the game - and that means they have an extra .txt file along with the regular .package file. And, you don't just dump it all into your Downloads folder. Once you install the Scriptorium, it will install all the other stuff for you.

Then - go get 90_UnleveledWall also by Numenor. (This wall is amazing!) Numenor cautions on his post that some people have experienced problems with this wall; but, I've used it since he first released it in 2006, and I have NEVER had a problem with it - I've used it through various EP/SP disc installs on XP, Vista, 7, 8, and now on Windows 10 with UC.

Numenor advises that you put BOTH the .txt and the .package in the shortcut folder. However, my 90_UnleveledWall.package file is in my documents/Downloads/zHacks folder - always has been, and, like I said, I've never had a problem with it.
==========================================================
I use Niol/Moi's Roof Shader for brighter roofs
And, HW/Honeywell's A Little Greyer: Roof Trim Defaults
Then, if it's a Bespoke Roof recolor - it will be THESE adjusted versions by The Llama Park/Tumblr that you see used in the pictures.
(However, what you get in the packaged file, will either be the plain EA roof or the straight, un-modified Bespoke roof from the set here on MTS2.)
Maranatah's White Wall Top texture replacement
Moo's Turn On/Off Lights
Menaceman's Lunatech Lighting Fix
BeosBoxBoy's no-red-pause-mod
Nopke's Go Under Spiral Stairs mod for proper spiral stair usage
And, of course, everyone needs Numenor's CEP and SEP!
I also use FRAPs to take in-game pictures, and PhotoShop to clean/collage said pictures.
And, I highly recommend using gummilutt's Invisible Medicine Cabinet to add features to any mirror - as per her policy, it's not used or included in this lot.


Additional Credits:
Thank you EAxis for this wonderful game