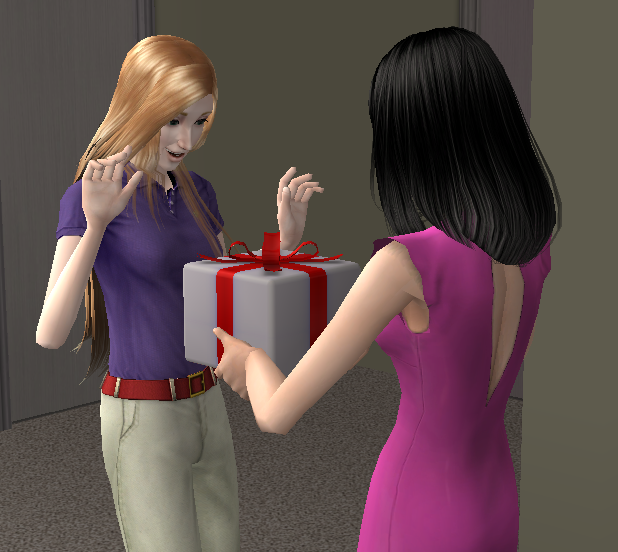 6,714 Downloads 192 Thanks  Thanks 51 Favourited 12,683 Views
Created by kestrellyn
View Policy / About Me View all Downloads
Uploaded: 26th Jun 2020 at 11:00 PM
Updated: 5th Feb 2022 at 11:48 PM
Update:
This hack was originally released for a Secret Santa that happened over a year ago, as a gift for Sunrader, who's been helpful with testing since then. I finally polished it up for general release.

Basically: this hack allows sims to autonomously give each other gifts during parties. They will not actually give each other things from their inventories, they will actually purchase a totally new object and give it to the other sim. You can have birthday party style giving, where everyone give gifts to a particular sim, or Christmas party style giving, where everyone gives gifts to everyone else. Moreover, positively received gifts will increase the party score! Rejected gifts will naturally decrease the party score. The whole hack is highly configurable (because that was something Sunrader originally wanted). Details follow.

There are three packages that you need for this hack - the social plugin, the social object, and the controller.

This involves a totally new social interaction called Give Party Gift, which is only available during parties. It does require Seasons, however, because the gift box accessory used in the animation is a Seasons object (and the animation itself may require Seasons, too). As such, the success of the social interaction can be customized separately from the regular Give Gift interaction from Seasons. If you open the social object package in SimPE, you will see a BCON called "Gift Accept/Reject Tuning (Modify this one)", which you can modify to change when gifts are accepted or rejected. There are two possible acceptance results - a "good" accept where the sim enthusiastically accepts the gift, and a "meh" accept where they're fairly neutral. There are thresholds of STR, LTR and playfulness for "good" and "meh" accepts - basically, the "good" accept will happen if the sims meet any of the three requirements for it, the "meh" accept will happen if the sim doesn't meet those requirements but does meet at least one of the requirements for the "meh" accept, and a rejection will happen otherwise. Note that for the playfulness requirements the value in the BCON is 100 times the number of playful points, so 800 in the BCON means 8 playful.

When this social interaction is accepted, the game will randomly choose an object from a gift list, charge the giver for it, and put it in the receiver's inventory. Which list is used is chosen by a dialog that you will get at the beginning of the party. These lists are also BCONs in the social object, named starting with "Gift GUIDs", which can be modified. They look like this:

The first line is the number of GUIDs. It's very important that you remember this line, and if you edit the BCON, be sure to update it. An easy way to tell how many GUIDs there are is to take the (decimal) line number of the last line of the BCON and divide it by 2. After that, each GUID is entered on two lines - the first contains the last four digits of the GUID, and the second line contains the first four digits of the GUID. There are also labels for these three lists - the first line is labeled with the in-game name of the object, and the second line is labeled with its EP or SP requirement. Note that if you delete a line of the BCON, the corresponding line of the labels will NOT be deleted, so you will have to go do that separately. There should also not be any blank/0 lines in these BCONs.

There are three versions of the social object: partygiftssocialobject-AllEPs contains GUIDs from all EPs and SPs, including two from the EA Store, and obviously requires either the UC or every EP/SP plus the two EA Store baby toys (which I believe you can download from MATY). partygiftssocialobject-BaseGame contains only objects from the base game, although it still requires Seasons to actually work. partygiftssocialobject-AL also contains only base game objects, but should be used if you also have AL installed. If you have some other combination of EPs and SPs, you can download just the Base Game package (or the AL package if one of the EPs you have is AL), or download both and create custom gift lists with just the items that are actually in your game. You can also add any CC objects you want to these lists, or swap them out for entirely different lists as long as they are formatted the same way. If you want to make some objects more frequent as gifts than other objects, you can add them to the list(s) multiple times.

By default, the lists for Deco and Baby and Child contain only objects that cost up to 500 simoleons, and the Housewares list contains only object that cost up to 1000. If you change this, you will probably also want to change the minimum amount of money that sims need to have in order to give gifts off of that gift list. This is recorded in two places: 1) in the social plugin package there is a BCON you can edit called "Max possible gift price" (one line per gift list) and in the controller package there is a similar BCON called "Maximum gift cost" (similarly one line per gift list). This is the amount of money the sim has to have in order to give a gift, and it should be at least the actual maximum cost of gifts on the list.

If there's an error in a gift list, either one that you introduced by editing it or one that I introduced when I manually entered ~300 GUIDs into SimPE, you won't get an error or a reset, you'll instead get a notification in the upper right. If the game just couldn't create an object with the specified GUID, the notification will tell you the (decimal) line number of the first line (second part) of the GUID, followed by the actual values that are recorded for that object, second part then first part. These latter values will also be in decimal, so you will have to convert them to hex to see what they are in SimPE. If the sim coudn't afford the gift because you set the maximum gift cost too low, you will get a notification telling you where to set that.

The Controller and the Gift Recpient

You will get a second dialog when you start a party, after being asked to choose the gift list, which will ask if you want autonomous gift giving at all. The first option ("Yes, to everyone") will cause all sims on the lot to give gifts completely autonomously to anyone else on the lot. (Note: I've had trouble with this mode on my new computer, although it worked fine on my old Windows 7 computer and Sunrader reports that it works for them. So YMMV.) The third option ("No") will turn off autonomy completely, although the interaction will still be available if you, the player, want to use it. The second option ("Yes, to a designated gift recipient") will ask you to choose a gift recipient and will then cause the controller to run a script which will direct every family member and greeted or invited guest to give one gift to your designated gift recipient (not all at once; they will take turns). In this mode, the controller will interrupt your commands when it is that sims's time to give their gift. It should take a break if the gift recipient has low critical motives, is trying to satisfy critical motives, or is doing something party-critical like getting married or growing up. If the gift recipient leaves the lot during the party, or is off-lot at the time the party starts, gift-giving should resume after they return.

The "critical motives" are bladder, hunger, and energy and you can configure what "low" means by editing the BCON in the controller package called "Minumum motvies for gift recipient". Note that motives in the game actually go from -100 to positive 100, so the setting of -50 means when the bar is 1/4 full.

You can also modify the effects that given gifts have on the party score, by modifying the BCON called "Party scores for gifts" in the controller. There are different values for "good" gifts, "meh" gifts, and rejected gifts. These are scaled by the number of people at the party - the way it works is that if every person at the party gives one "good" gift, the party score will be modified by the "good" gift score times 10, and if every person at the party gives a "meh" gift, the party score is modified by the "meh" gift score times 10, etc. So, the more people there are at the party, the smaller an effect each individual gift has. A roof raiser party is achieved at a score of 175; by default the settings are 10 for a "good" gift, 5 for a "meh" gift, and -5 for a rejected gift. Note that these have effect regardless of whether the gift was given autonomously, or by you, or as part of the controller's script.

This hack requires Seasons. Otherwise, you will just need to get the correct social object and controller packages.

This might conflict with hacks that change what happens at the beginning and end of parties, or hacks that change how party score is calculated. It conflicts with simler90's new parties hack, if you use that one, get partygiftscontroller+newparties instead of one of the other versions and make sure it loads after the simler90's hack.

Download one social object, one controller, and the social plugin.