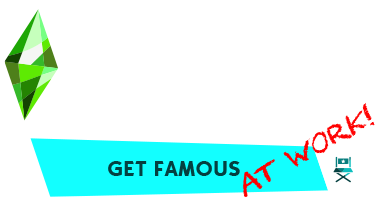 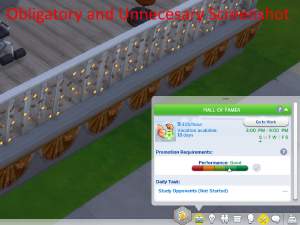 Created by wildride View Policy / About Me View Downloads Home

I was playing around and got frustrated by the fact that my Hall of Fame athlete had no fame. It made no sense, we all know who the superstar athletes are even if we dont follow the sport just by the fact they are insanely good.

This led me out to find a mod to increase this specific issue and unable to find one, make it myself. To my surprise EA has already encoded it in there, my sims were gaining fame from their work just at a low rate. Way less than an actor doing a commercial gig, this went across most jobs (details below) and was given on 2 levels small and large, that would occur in the upper tiers of jobs.

So simply put I changed the default values for these to a higher number that is more in line to be relevant, its not a "massive" increase but should improve things over time.

The game by default awards fame on the acting career as follows.
121.5 Per Commercial
243 For a TV Show
405 For a Movie
These are base values for "bronze" and are modified depending how well you do.

These are being called by most non actor jobs prior to "Get Famous" and they seem to have changed how they do things for careers afterwards.

These numbers were to bring them in line with a commercial actor on small, and a tv actor on large.

*I think this is the university soccer team according to the code, but this came after Get Famous so seems out of place.

As you can see this isnt every available career, it seems EA put get famous in adjusted the current jobs and then forgot to add the code for it to new careers. I plan on doing this in future as it requires a bit more than just tweaking a couple of variables.

Version 2:
Includes Jobs that came after Get Famous was released. Except for the Civil Designer career path. While I see the files I need to edit via DocFetcher, Sims4Studio couldnt find them, likely because I dont have Eco/Stranger/Vamps/Magic.

All are tuned to a "small" level at high levels as I saw these jobs as less fame inclined but would still carry a more niche following, this includes being part of the Uni ESport team. EA did not have any pre-existing fame gain on these careers at all, so didn't want to be overly aggressive here.

You only need to download 1 file, left v1 there as its smaller for those without the later DLCs.

Note for Career Mod creators.
To add fame to career gain you need to edit the "end_of_day_loot" (search for this to bring up correct files)
You will see a line
<T>163484<!--LootActions: loot_Career_Statistic_Responsible--></T>

If you do then your career will already work with this mod. Otherwise just add the appropriate line where you want to add the fame gain to. Look above for level examples.