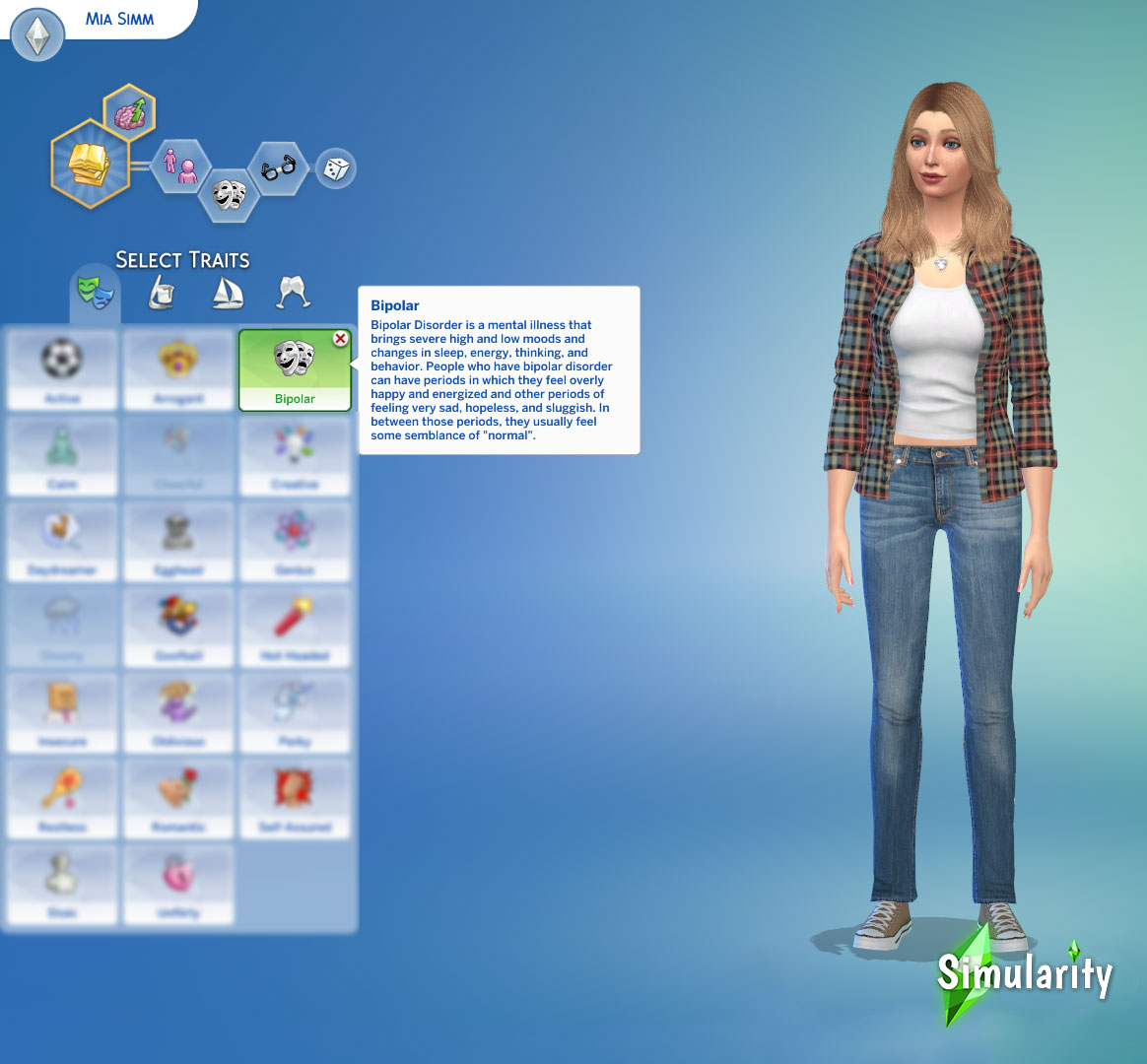 425 Thanks  Thanks     75 Favourited
UPDATED June 30, 2021 My apologies, I thought I had kept this updated along with my website version but apparently not! Now updated to version 1.35 with two new translations, new buffs, and more.

Bipolar is, according to the DSM-5, a group of brain disorders that cause extreme fluctuation in a person's mood, energy, and ability to function. There are actually at least three types of bipolar disorders (Bipolar I, Bipolar II, and Cyclothymic disorder) but this particular trait would fall under the diagnosis of Bipolar I. People who live with bipolar disorder experience periods of great excitement, overactivity, delusions, and euphoria (known as mania) and other periods of feeling sad and hopeless (known as depression). As such, the use of the word bipolar reflects this fluctuation between extreme highs and extreme lows. I created this trait based on my own experiences with Bipolar I along with some considerable studying of other sources. My goal is neither to glorify nor to demean those with mental illness like myself. I wish only to educate and give those without such an illness a view into the world of what it's like for those who do have this illness and illnesses like it.

Manic Episode (Energized +10) - Your Sim is having a manic episode and feels overly happy and energized. They may experience random fits of rage, less need for sleep, reckless behavior, and increased sex drive.

Depressive Episode (Sad +10) - Your Sim is having a depressive episode and feels incredibly sad, hopeless, and worthless. The may experience a loss of energy, need for more sleep, changes in appetite, irritability, and increased crying.

Anger Flash (Angry +8) - Your Sim is having a severe anger flash which is common during manic episodes and occasionally happens during depressive episodes.

Stressed Out (Stressed +10) - Your Sim is incredibly stressed out from their wide ranging and ever changing moods. They need time to relax and re-center themselves.

Emptiness (Bored +10) - Your Sim is feeling completely empty, stuck in neutral, and overall bored with life itself.

Bout of Paranoia (Scared +6) - Those Sims were talking about and plotting against your Sim behind their back, your Sim is sure of it! Or maybe they are just having another random bout of paranoia as part of their bipolar disorder which can occur during any kind of episode. They may also have feelings of being watched or being followed or just general fear during this time.

NOTES:
Due to the severity of the mood swings, some moods could actually kill your Sim. If you use the MCCC mod by Deaderpool, go into its settings and Turn Off Emotional Deaths. That's the best way to keep your Sim alive and quite frankly, I'm not a fan of the emotional deaths.

CURRENT VERSION:
v1.35 This is the latest version including two new translations, a new Scared buff, compatibility with the latest patches, and more.

Additional Credits:
I created this trait mod using the Mod Constructor v4 by Zerbu with help from Kutto and others on Zerbu's Discord channel. I also utilized Sims 4 Studio for a few quick edits so thank you to them as well! I would also like to give a shoutout to emile20 here at Mod The Sims for creating the first Bipolar trait set I ever saw and inspiring me to create my own.