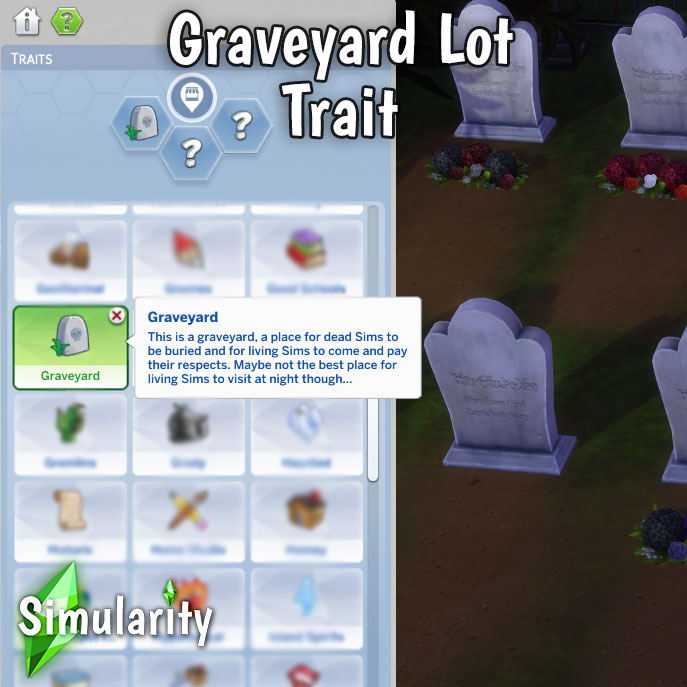 This lot trait will turn any generic lot into a proper graveyard perfect for all of your deceased Sims to move to as their final resting place... if they wish to rest that is! During the day, the graveyard will be populated with mourners paying their respects to lost loved ones. At night, the graveyard will be haunted by those whom have been lost. The lot trait may include a few more surprises as well. Read on... if you dare!

May They Rest In Peace (Sad +1) - Your Sim is thinking about all the souls whom are buried here including their own relatives and friends whom have past. May they all rest in peace.

Creepy Feeling (Stressed +2) - Being in this graveyard so late at night has given your Sim a creepy, stressed out feeling. Maybe this wasn't the best of ideas? It might be best to come back during the daylight hours, unless they like this sort of thing.

What Am I Doing Out Here?! (Scared +4) - What am I doing in a graveyard after midnight? Am I crazy?! Did you hear something? I heard something! I need to get out of here!!

Feeling at Peace (Happy +2) - The sadness and loss that your Sim once felt at the graveyard has been replaced with happy memories and feelings of being at peace. They are glad that they visited the graveyard now.

Undead Among the Dead (Sad +1) - Your Vampire Sim is surrounded by the bodies of those who never rose from the grave to become vampires. Your Sim is now pondering whether life as an immortal is truly worth it or if they should have never have become the undead.

In My Element (Energize +2) - It's late at night and your Vampire Sim is surrounded by the dead and the undead. They are truly in their element and ready to go out and stalk their next prey.

Look at All Those Dead Fools! (Happy +2) – Your Sim is looking at the tombstones with glee and wondering how many of those pathetic souls they put in those graves and how many more of those graves they will fill with their evil deeds.

This Place is So Depressing (Sad +4) – Your Sim often feels sad but looking around this graveyard has them feeling very depressed and thinking dark thoughts. Maybe this isn’t the best place for them to be?

Eww, Dead People (Uncomfortable +3) – Your Sim is feeling very grossed out being around all these dead Sims. They should probably not stick around too long or they might get sick to their stomach.

Feeling at Peace (Happy +2) – Your Sim feels an odd sense of peace after visiting the graveyard. They are now more certain of their place in the world as a member of the undead.

Relieved to Be Anywhere Else (Happy +2) – Your Sim is relieved to be anywhere that is NOT that graveyard! Maybe they shouldn’t go back there for a long, long while. Or ever.

Never Been More Alive (Energized +4) – What makes your Sim feel more alive? Seeing the unfortunate being dead! Yes, your Sim is truly evil and their trip to the graveyard has reinvigorated them like never before.

Jeepers Creepers, it’s the Reaper! (Scared +3) Your Sim has just spotted the Grim Reaper at this graveyard! It couldn’t possibly be their time yet, could it?? Maybe Grim is just here to wrangle all these ghosts?

Hello Again, My Old Friend (Happy +2) – The Grim Reaper has appeared to wrangle the many ghosts haunting this graveyard. He obviously isn’t here for your Sim, seeing as how they are an immortal vampire. Your Sim can still socialize with ole Grim.

Fascinating! (Focused +3) Your Alien Sim finds it very interesting how the natives of this world react to this strange being in black. They must study this phenomenon and learn more about it.

Not the Reaper Again (Sad +1) It saddens your Sim to see the Reaper again as it reminds them of the day that they died and became a ghost.

And So I Wander… (Fine +1) As your Sim wanders this graveyard, they wonder why they too aren’t resting in peace like some of the other souls here but then remembers they have unfinished business and continues on.

CURRENT VERSION:
v1.61 - This is a big update! I added several new buffs for various types of Sims including ghost Sims who will no longer react the same way as normal Sims but have their own special buffs. This is thanks to a suggestion from a fan. (Thank you!) Another part of that fan’s suggestion was to keep Sims with the Brave trait from being scared in the Graveyard at night so that is also a new feature. I also realized that when the Grim Reaper appeared he was scared of himself. Whoops! That is now fixed. I also increased some autonomy actions and made several other improvements that I can’t quite remember at the moment. Needless to say, I put a LOT of work into updating/upgrading this lot trait over the past few days. I hope you like the improvements and please let me know if you think of any other ways it can be improved. I’m always open to suggestions and I check my email often.

Oh, one more thing, many of the translations may now be out of date. If you translated this lot trait before, please contact me if you are able to provide an update! If you would like to provide a brand-new translation, you can still contact me! The Russian translation by wild_guy HAS been updated but it's the only one to be updated so far.

HOW TO USE:
To use this trait you'll need to go into Build Mode on any given lot. Start by selecting the Venue Type as "Generic" as that seems to be the best choice for a graveyard thus far. Then go to Lot Traits panel and select "Graveyard" which should be this lot trait. See the preview image at the top of this post to see what the lot trait icon and description should look like in the game.

As for the lot itself; build to your heart's content or do a search in the official Sims 4 gallery for #graveyard or #cemetery and I'm sure you'll find something to your liking. The lot trait will work with any type of lot other than residential type lots.

NOTES:
For the mourners and other Sims to mourn autonomously, they must have something to mourn! Blank tombstones and urns from debug won’t work (I tried). You need actual dead Sims for them to mourn. So, either wait until a Sim dies of natural causes or… uh… don’t wait.

Then put the tombstone/urn on the graveyard lot so that the mourners and others will start doing their thing.

TRANSLATIONS:
Simplified and Traditional Chinese by Ciway,
German by andi_paradise,
Portuguese by Francine,
Italian by Stefano,
Spanish by Josué,
Czech by Mikaela,
Russian by wild_guy,
French by Cocoooo01.

SPECIAL THANKS:
KawaiiStacie (creator of the popular Slice of Life mod) first created a Graveyard Lot Trait mod that was similar to this but has since abandoned that mod and it is no longer available anywhere for download. I created this new lot trait from scratch on my own. I would still like to give props to KawaiiStacie for coming up with the original idea and inspiring me to create my own graveyard lot trait. Thank you.
I created this trait mod using the Mod Constructor v4 by Zerbu. I wish to thank Kutto and Lumpinou from Zerbu's Realm Discord channel for their essential help in creating this lot trait. I also utilized Sims 4 Studio for several edits so thank you to the team behind that program as well. I would like to thank DeathPoke1qa for making the suggestion that I alter the trait to behave differently for vampires and evil Sims which I now have. I may be making more edits in the future because of their suggestions and others. Thank you to MizoreYukii of the Creator Musings Discord channel for helping me figure out the venue restrictions on all my lot traits!


You need only to download the one latest version!

All of my latest creations, Sim stories, and more can be found on my official website at www.simularity.cc