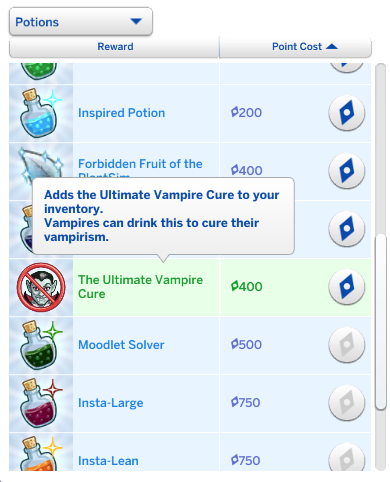 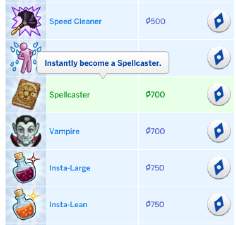 The {CORE SCRIPT} .ts4script file MUST be placed directly in your mods folder or at most 1 subfolder deep for the rewards to show up in the rewards store.

Plantsim: No packs needed. They're in the base game.
Vampire: Requires the Vampires pack.
Spellcaster: Requires Realm of Magic.

Does not override any game files, so it should not conflict with anything.


This mod adds 4 new purchases to the rewards store which allow you to directly gain occult life states without having to socialize with strange sims.

If you intend to purchase these rewards on a servo, I suggest you take a look at my Servo Hybrid Enabler Mod: https://modthesims.info/d/645505/se...id-enabler.html
Do note that Servos cannot drink the Vampire Cure. If you want to cure a vampire servo, you will need to use cheats.

If you intend to add multiple occult states to a single sim, I suggest you view my other mods which are designed to fix many of their issues.
Other Information

You MUST download the {CORE SCRIPT} file for any of the rewards to show up in-game.