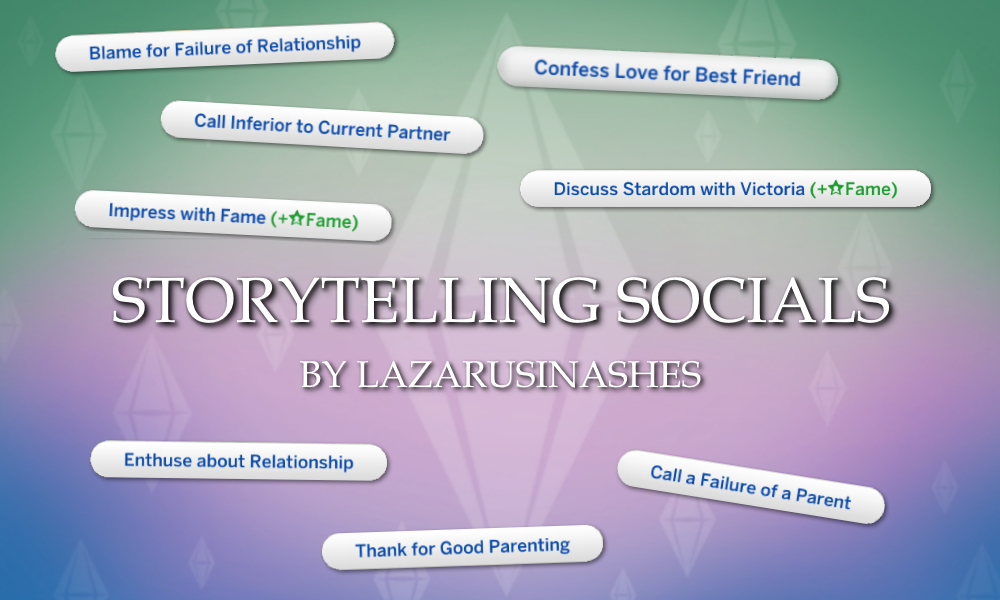 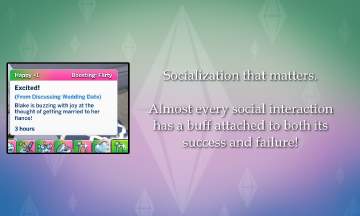 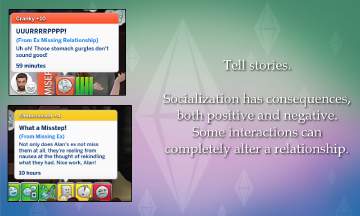 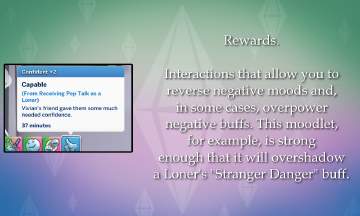 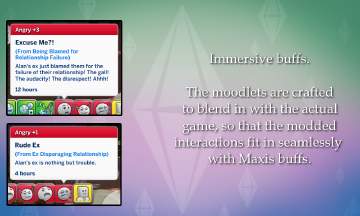 304 Thanks  Thanks     117 Favourited
Storytelling Socials is an expansive mod that adds over 50 interactions to the game (with more planned in the future), complete with immersive moodlets, occasional skill gains, and, at times, hyperspecific context. Discuss your wedding date with a fiance! Roast your friends! Have a Loner ask an Outgoing Sim for socialization tips! And many more.

That's what it means.

The development of this mod took place over several months. As I played through my latest legacy challenge, I found myself disabling over 400 actions with MCCC's Tuner. Most of them were random actions, but it quickly became filled with social interactions. I realized that socialization is surprisingly shallow without the constant complaining, discussing local fishing spots, and inconsequential trait-based socialization that, more often than not, does nothing. Doesn't even grant a moodlet.

Oh, Good Sims can discuss world peace? Great, what does that do?

Oh, nothing? It's just a retextured "Tell Funny Story"?

So I took it into my own hands.

Every once in a while, I would run into a situation and think "I wish I could do this thing," and so I added the interaction to the list. This mod adds wholly new interactions, thus requires no expansion packs, though the full breadth of interactions may not be available.

Immersive Moodlets: I realize "immersive moodlets" is a strange thing to taunt your mod as having, but hear me out. Have you ever installed a mod and found that the moodlets don't blend in with the Maxis ones (such as they have color due to using the wrong images for the buffs), the capitalization in the interactions and/or moodlets is off, or something else that reminds you that what you're using is indeed a mod? That might be a small thing to some of you -- and doubtless, it is, which is fine! -- but it always bugs me. For that reason, I aimed to make the interactions, moodlets, and consequences fit with the tone of the game as much as possible.

Rewards: Higher-level friendship unlocks more interactions that grant moodlets, along with trait-specific ones, such as "Give Loner a Pep Talk". If a Sim is good friends with a loner, you can give them a pep talk, which gives them a +2 confident moodlet. This moodlet, due to its strength, will overshadow their "Stranger Danger" moodlet, which is handy if they've got a date or party to attend. The inverse is also true; Sims can "Make Enemy Even Angrier" if, as the name implies, their enemy is angry (this might kill them, be careful with it. Or maybe that's your intent. No judgment here.) They can also Insult Parenting if their parent has failed them.

Even more, rewards come with being famous! Famous Sims can "Call Unfamous Sim a Plebian" and, if a famous Sim has a bad parent, say "Look At Me Now!" and get a strong, long-lasting confident moodlet. This interaction also cannot fail! One of the more useful ones is "Impress with Fame", which not only grants fame, it, if successful, will grant the target a +2 Flirty moodlet. However, if you're a Global Superstar, you'll notice even stronger benefits.

Speaking of romance, there are rewards for couples as well! They can Enthuse About Relationship and, just in case you make a romantic misstep, "Reaffirm Love", which grants not only a moodlet, but 5+ romance with the Soulmates relationship level. However, these interactions *can* fail -- so be careful, the consequences may be steep.

Contextual Interactions: Context works in several different ways in this mod. Before I continue, let me say that I purposely avoided adding interactions that are covered by Lumpinou's incredible mod "Contextual Social Interactions" -- for that reason, I recommend downloading both, but this mod will function just fine without it! Back to the mod: several interactions are based on events, your Sim's relationship with another Sim, and more. For example, do you miss your ex? Now you can tell them that you miss them, which, if successful, will shoot their romance up by a whopping +35 or so, give your Sim a happy +3 moodlet, and give them a flirty +2. However, this interaction is risky; if it fails, don't be surprised if you see them sprinting toward the bathroom with stomach gurgles. If you have absolutely no desire to rekindle your relationship with an ex, feel free to blame them for your failed relationship, which will have them shaking with fury. One of my favorites, however, is being able to congratulate your friends if they win a fight!

I won't spoil all of them though; play with the mod and see what pops up! (Hint: try talking to the Grim Reaper after your enemy dies for one of my favorites).

Flavors: There are two versions of this mod: the first is the normal version. The second is the normal version with reduced autonomy. Reduced autonomy aims to kneecap some repeated actions that may annoy you; for example, if you don't want your loners confident all the time, "Give Loner a Pep Talk" is disabled autonomously. I personally think it's cute when Sims autonomously do it, though!

Caveats: Time for the bad news.

As it currently stands, I have added no new interactions for occult Sims. That'll likely disappoint some people -- I apologize! I'm not fond of occults and consequently never play them. As a result, I never thought of new interactions; I don't know what's missing from them!

Modded interactions are difficult to add responses to. What that means is just that when the interaction is over, it's over; they don't react to what happened after. An example is the "Gossip" interaction. After the initial animation is performed, both Sims laugh a bit in response. None of the interactions here have animations like that and my attempts to incorporate them manually just broke the interactions. It's possible to do, but for right now, the easy thing to do is just leave them as is. Future versions may have reactions in them.

Now, BUGS: there are very few bugs, but the biggest one I found was when using the Flower Arranging skill, specifically with the Faithful scented flowers. If you give this to your partner and attempt to use the modded romance interactions with them, it will fail. My Sim's partner even got a Festering Grudge sentiment, wiping out their Deeply in Love sentiment. As you can imagine, this was extremely frustrating. I shut off the game without saving. I went through it so you don't have to. Beware!

Recommended Mods: Here are the mods I *highly* recommend, as they go well with this one, though NONE are necessary to use this mod!: Have Some Personality Please, Contextual Social Interactions, and any mod that disables random flirting, since that may be a problem with the new "Impress With Fame" interaction among others. I haven't playtested without mods to prevent that, so I can't say whether it would be an issue or not. However, if you already have a mod that disables random flirting, it will not be an issue.

YOU NEED XML INJECTOR FOR THIS MOD TO WORK PROPERLY!

Unzip both the .package file and the .ts4script file and place them in your mods folder. Again, make sure you have XML injector!

Future Editions: Here's what I plan to add.

That's it for now. Thanks for reading and enjoy!