Toddlers Can Use Stairs 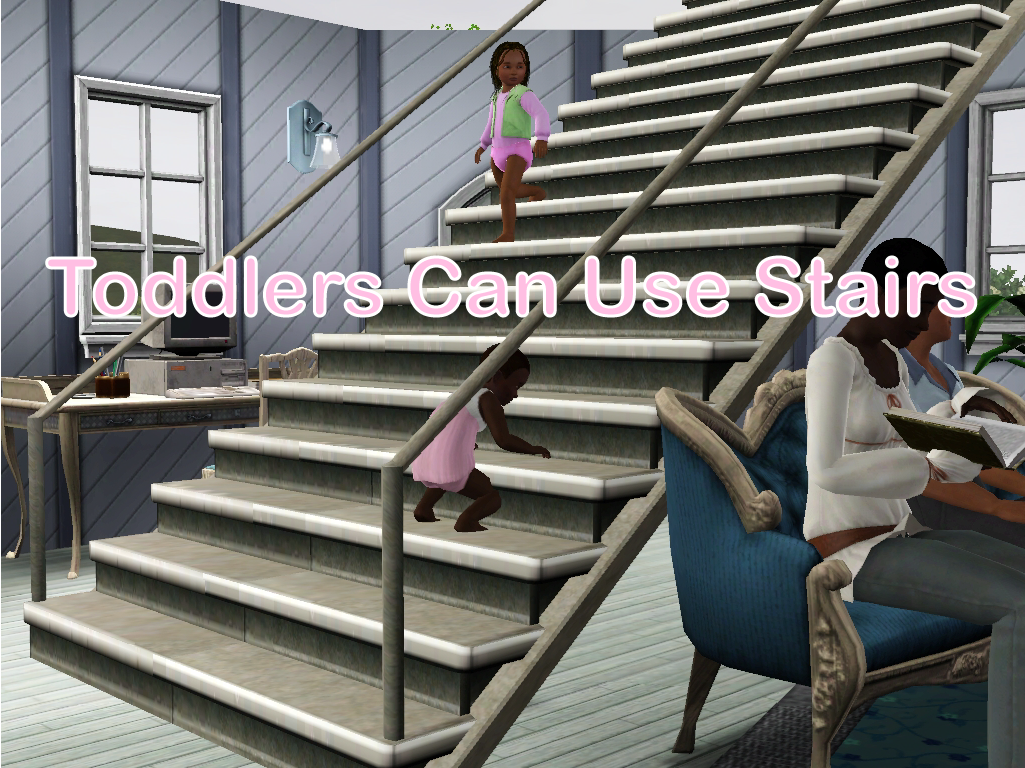 25,146 Downloads 612 Thanks  Thanks 218 Favourited 54,979 Views
Picked Upload!   This is a picked upload! It showcases some of the best talent and creativity available on MTS and in the community.
Created by lizcandor
View Policy / About Me View all Downloads
Uploaded: 27th Apr 2021 at 8:22 PM
Updated: 4th Jul 2021 at 2:43 AM
Summary
Free your sims from carrying their toddlers up and down stairs! They have better things to do!

Details
This is a combination script, tuning, and default replacement mod that lets toddlers use stairs.

The default replacement part replaces the StairHelper object's OBJK with a version pointing to a custom Stairs class that toddlers can interact with. If this mod is inserted into an ongoing game, existing stairs may need to be deleted and re-purchased for the replacement to take effect.

The tuning part edits the LocomotionConfig XML to insert stairs animations for toddlers, demonstrated in the gifs above. Toddlers who have learned to walk will use the slightly faster standing animations, while those who haven't will crawl.

The script part (in addition to letting toddlers use stairs at all) replaces the Go Here interaction and toddlers’ interactions with some of the objects they can use, lifting the restriction that blocks those interactions from being used by a toddler not on the same level of the lot as the object in question. (See Conflicts for the list of un-restricted interactions)

Expected Updates
Compatibility
This mod will conflict with any others that edit the LocomotionConfig XML or replace the OBJK of the StairHelper object. It also seems to conflict with the NRaas NoCD mod, unclear why.

There are two versions available to download, one compatible with NRaas GoHere (v44) and one not; only install one. Don’t install the GoHere-compatible version if you don’t have GoHere - it will not work and none of your sims will be able to move, it'll be bad. If you use the non-GoHere-compatible version with GoHere, nothing bad will happen, but it'll undo some of the improvements GoHere applies to the Go Here interaction.

And finally, this mod was made on patch 1.69! It's unclear if it works well with 1.67 or not, still figuring that out.

Credits
Simsample for the house used in the images/gifs!
Custom Content