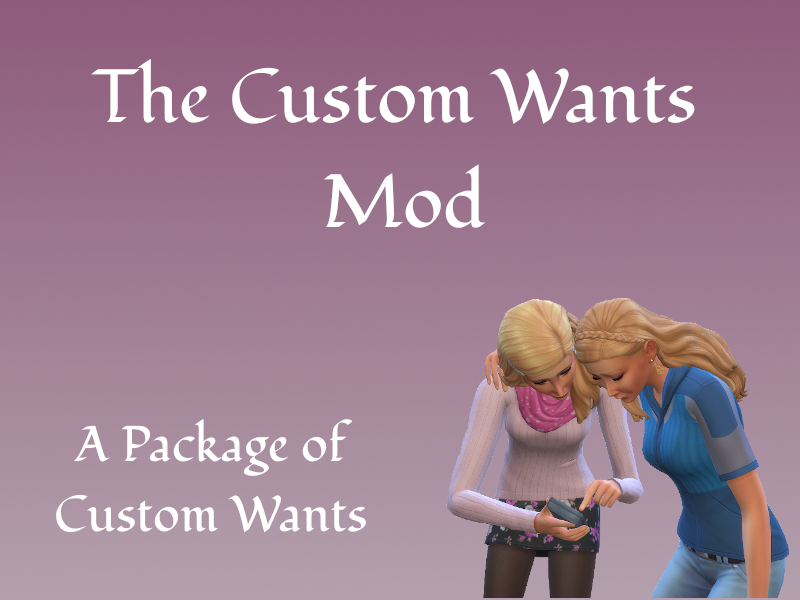 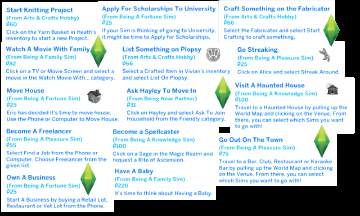 August 8th 2022 ~ Version 2.1.2.1
~ Fixed a few typos.
~ Added French translation
August 2nd 2022 ~ Version 2.1.2
~ Fixed a few wants that were throwing up errors, mostly where the wants were mistakenly referencing themselves. These should be fixed but don't hesitate to let me know if you experience any further issues.
~ Added Portuguese translation.
July 31st 2022 ~ Version 2.1.1 ~ Updated a few Wants from the Island Living package that were mistakenly tagged as Reactionary. These are now Short Term Wants.
~ Updated file name for Werewolves package.
July 30th 2022 ~ Version 2.1
~ Updated for compatibility with the new Wants system. All the whims have been converted to Wants. PLEASE DELETE THE OLD VERSION! This is important because the new files will NOT override the old ones. So delete any version you have prior to this one.
~ All the Wants now produce an appropriate moodlet and will contribute towards your Sim’s fullfillment.
~ I made a lot of changes to the strings, so translations will need to be done from scratch. Really sorry to the translators but this was far simpler.
June 21st 2022 ~ Fixed an issue with the 'Fill Birdfeeder', 'Watch Birds', 'Visit Sixam' and 'Moongaze' whims that prevented them from working. They should now work fine!
June 19th 2022 ~ 54 new whims added to support the upcoming update of The Hobby Mod.
~ Restructured the mod so the whims are now separated into packages based on Pack. So simply delete the files for packs you don't have. So you need to delete the old version of the mod before installing this!
April 19th 2022 ~ Updated to fix a typo in the Chat With Rabbit whim.
April 18th 2022 ~~ December 21st 2021 ~ Fixed an issue with the "Invite Family Over" whim. Thanks Joliebean!
~ December 18th 2021 ~
-------------------------------------------------------------------------------------

I love playing a want-based game and, with the popularity of The Personality Mod, I wanted to be able to work more with custom wants and try and add some new direction to them in a series of manageable mods. Additionally, I want other modders to be able to make use of these wants for their own mods. So this is the Custom Wants Mod!

What Does It Do?
The wants in this mod have been split off from The Personality Mod and now have their own package. This mod now will have new wants added to it often to fit in with some of my other mods.
The wants on their own won’t do anything in game; you need mods that add custom whimsets using these wants installed for them to show up. This mod literally just contains custom wants; it’s whimsets that cause the wants to show. Mods that use these wants in their whimsets include: The Technical Details
The mod is Base Game Compatible. The files are separated into different packages for each pack, so just delete the ones for the packs you don't have.
DO NOT delete the Strings or Icons packages.

Known Issues
No known issues at this time.

Conflicts
This mod doesn’t conflict with any other mods at this time.

For Modders
If you’re here because another mod has guided you over here, you can skip this section.
If you’re interested in using these wants in your mod, then this is the section for you!

Inside this mod, you’ll find all the wants I’ve created. I’m more than happy for you to reference these wants inside your own custom whimsets. If you do use them, please Do Not include this package: instead, link back to this page and let your downloaders know they’ll need this package for the new wants to show up. Feel free to let me know you've referenced them; I'd love to know and I can include your mod in the list above!
I have included a ForModders zip file which contains all the references to the Wants for you to use in your whimsets.

Final Note
I want to give thanks to everyone in the community for their support and encouragement for the creation of these mods. I especially want to thank ChippedSim, Marco, Midiar and chingyu1023 for their help and assistance as I’ve been creating the new whims and for their ideas and suggestions.
All feedback is welcome, so please don’t be afraid to drop a comment. Any issues, please let me know and I’ll do my best to solve them!

Credits
Midiar and chingyu1023 for the suggestion of splitting this into a separate mod to allow other modders to make use of the whims with ease.
ChippedSim for helping me troubleshoot with tuning errors.
Marco for helping getting targeted whims to work!
Rex for being a star and helping me with the conversion from whims to Wants!
The creators of Sims 4 Studio
Sabrina Garcia, Britt Boons, Kimikosoma, Hendrik McSims, Viniciusvill, webkinzfrog, Origamika, Isy, Josie, GreenOnionC and Joliebean for translating!
Other Information

CREATION POLICIES
SIMS 4
- By all means, edit anything but for your own use only please.
- Don't reupload my work with your changes.
- Don't upload or share any of my work on SimsDom or other similar websites.

For my careers, object edits and clothing recolours, visit MissyHissy's Grotto of Gifts.
For my mods, please visit The Project Corner.
If you wish to support my work, I'm on Patreon. My mods will always remain free.

SIMS 3
-By all means edit my careers, activities, apprenticeships or 'degrees' but for your own use only please! And drop me a PM if you do make changes, I'd love to know what you've done :)
-Don't re-upload my careers, apprenticeships, activities and 'degrees' with your changes.
-Don't claim my work as your own. Be a little respectful, this stuff takes a lot of time and planning to perfect.

I'm currently NOT taking any more requests for Sims 3 Careers. I have done lots and I have lots more still to do on my list.
Recently, my inbox was full and I realise people couldn't PM. If ever you can't PM, please email me at [email protected] :)
Check out my other Careers at MissyHissy's Job Centre and visit my forum at MissyHissy's Job Centre Forum.
For further information on my custom 'degree' careers, please visit MissyHissy's College of Further Education.
For my Afterschool Activities, Apprenticeships and Teen Jobs, visit MissyHissy's School For Gifted Sims.