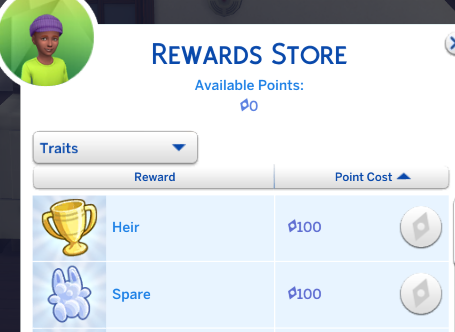 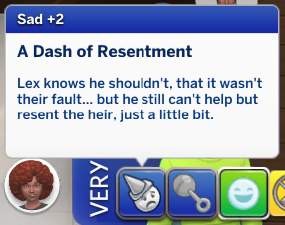 Created by DaleRune View Policy / About Me View all Downloads

Update 08/12/2021: Changed some buffs in the Mood Pack version to reflect some recently-added moods.

Update 24/10/2021: Remember how I said this was going to be comparatively simple?
Next on the docket: aforementioned statistic work-out, and interactions to the world at large instead of just intra-trait, as well as any bug fixes that may need to come about. Also, might consider making advocation and abdication not autonomous actions - or might not, depends how people feel.

After the mess that my last two trait packs have been to maintain, I decided to keep it comparatively simple - for now - with this one (and the next, on which more anon). Simmers who play legacies have to keep a track of a lot of spares and heirs per generation, and what better way to do so than in game?

Heir and Spare function as reward traits, costing 100SP apiece; a Sim can only have one or the other. Abdicated, Promoted and Former Heir are exclusively earned through interactions.

Features
This trait does not currently affect autonomy or need decay, nor does it currently have any whims or statistic multipliers. If there is anything that you feel needs adding, please let me know!
Other Information

Only download one of these! The mood pack compatible file only works with Lumpinou's, well, Mood Pack, found here: https://www.patreon.com/posts/43759541