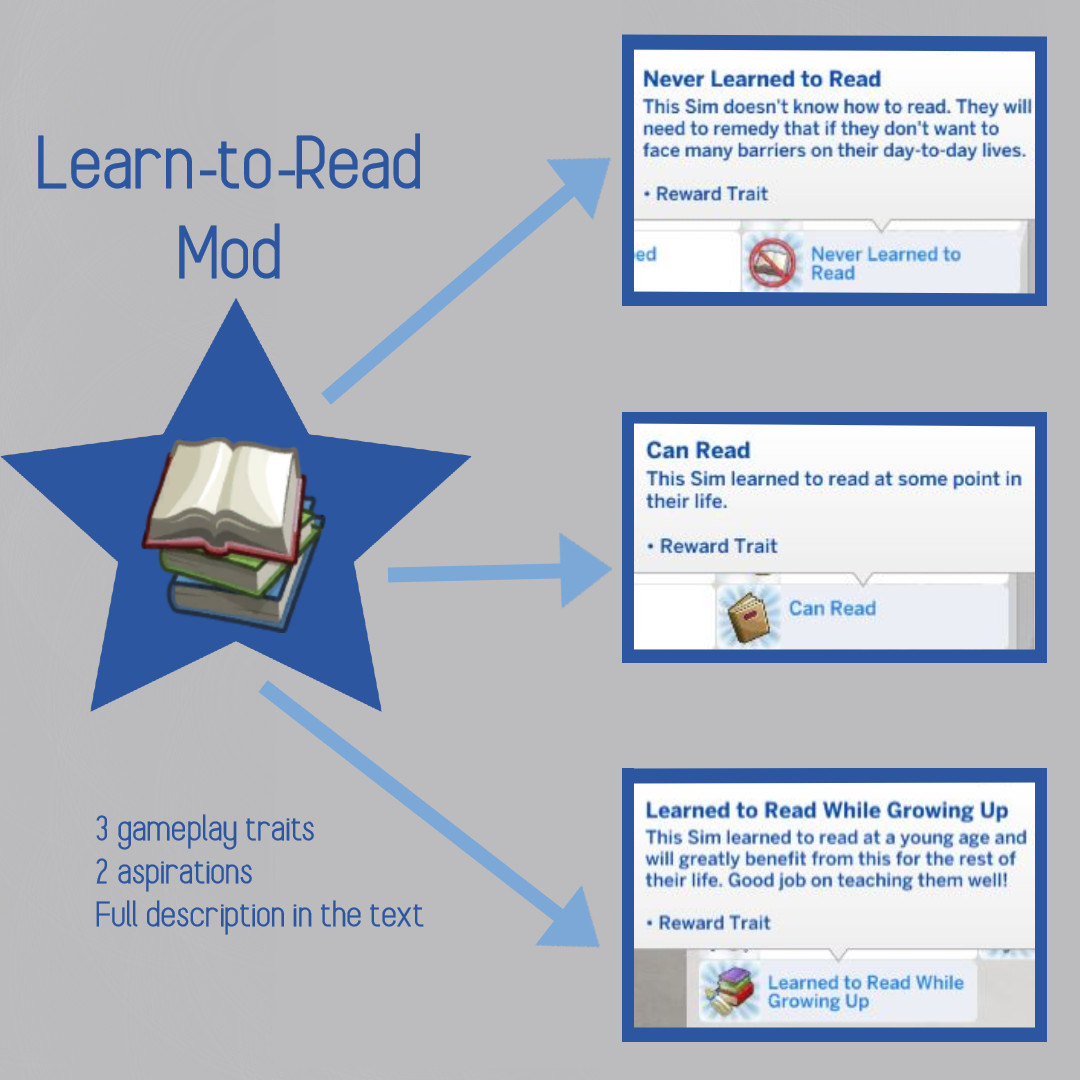 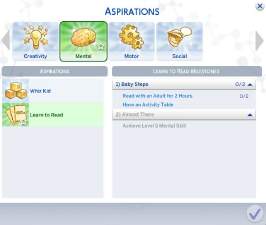 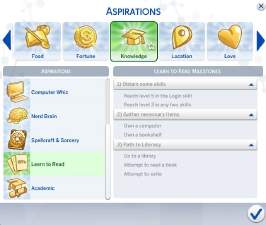 - The original version, which affects all Sims who don't get rid of the Never Learned to Read trait.
- New Toddlers Only version, which is basically the same thing except that only Sims that have been toddlers will gain the Never Learned to Read trait. It will trigger the moment they reach level 1 on the movement skill (since realistically all toddlers will move at least once and unlock that at the very least), and will be removed upon reaching any of the removal conditions, be it Imagination Level 4, or any of the aspirations if removed later in life.

Remember to pick only one!

And fun fact before you move on: chingyu1023's Sorted Traits Picker now has my Learn-to-Read traits for some reason, so feel free to check them out on

their page. Not sure how that happened but many thanks to them for implementing this!

Worth noting: I tested this out in a modern setting, but keeping in mind historical gameplay, specifically in the context of peasants who likely wouldn’t have been taught in school. This should be usable in any time period, but there's a relevant note in terms of historical gameplay where applicable.

Required: Base Game, though two buffs require University to be experienced.

Ever been surprised by how those Sims you never bought books for somehow grew up perfectly capable of reading? Well, I haven't been, but still decided to do something about it. Gone are the days in which you can raise your children within a raised platform without raising their skills - so long as you care for the consequences, that is. The game already provides the option for toddlers to “learn” to read at Imagination level 4, but nothing really goes wrong if you don’t get there. You’ll get benefits if you reach top-notch toddler, sure, but not increasing imagination (or any skills, for that matter) doesn’t really mean anything. There are no consequences.

Not normally, that is. So, introducing a Learn-to-Read Mod (originally dubbed the Literacy Mod before I decided that wasn’t a clear enough title). No longer will your Sims be able to pick up a book and miraculously gain the ability to read. They’ll have to actually learn to read.

Pre-existing and newly-generated Sims of any age (toddler+) will have the Never Learned to Read trait. But don’t worry, it’s perfectly possible to get rid of.

Easiest way to go about it? Reach level 4 Imagination as a toddler. The in-game learned-to-read notification is no longer meaningless, as toddlers will then gain the Learned to Read While Growing Up trait and reap all the benefits that brings.

The Learned to Read While Growing Up trait grants Sims:

They don’t have any boosts to skill gain from this because, well… Let’s be real, that would be a bit too OP, and I don’t mean for this to be that game-changing. Just a bit.

And if you don’t teach your toddlers to read? Well, the main consequences start as soon as they age up into a child, and will continue being applied so long the trait remains.

Sims who are still carrying the Never Learned to Read trait will experience:

*Autonomy score for actions such as

is multiplied by zero, so Sims who haven’t yet learned to read shouldn’t perform them automatically, and for example, the writing interaction will be stopped by the discomfort even if selected intentionally.


In addition to this, Sims with the Never Learned to Read trait will be fired from jobs that would require literacy in order to be performed. They will not be physically prevented from joining those jobs, but they’ll be fired when moving lots or reloading. You could thus try to keep them in a job like Engineer, for example, but they wouldn’t last long.

It’s easier to list the careers that aren’t affected by this, so here they are:

The following "jobs" will only increase performance at a 10th of the base pace. There are no longer any careers that auto-fire Sims:

**University isn't included here because last time I tried to mess with that, I got reports of it throwing LEs, so I'm not touching that again lol

The Writing, Media Production, and Programming skills will also only increase at a 1% rate so long as a Sim has the Never Learned to Read trait.

This doesn’t take into consideration whatever jobs may come from packs that I don’t own (like Interior Designer) since, well, I have not looked into it since I don’t have the packs. If you disagree with any of these careers being allowed, or think any other career should still be allowed, feel free to say so and explain your reasoning, as I am perfectly willing to listen and make changes if need be.[/spoiler]

Now, now. If your Sim didn’t reach level 4 in imagination as a toddler or otherwise spawned from the depths of CAS, there is still hope. There are ways to remove the Never Learned to Read trait and replace it with another, regardless of your Sim’s age.

(found under the Mental category)


This is a rather simple aspiration for children to complete, since they would still be in their learning years and presumably have access to outside sources like school etc.

For the first tier of the aspiration, your child will need to:

(You don’t have to use the activity table, but for justification’s sake let’s pretend your child Sim is learning to write or something on it, and that’s why they need it.)

And for the second tier:

That’s it. It’s a child aspiration to obtain the Can Read trait, after all, and they’ll likely want to finish another during their childhood years. But still, it isn’t as easy as learning to read while being a toddler.

(found under the Knowledge category)


Even past their childhood years, Sims will still have the opportunity to learn to read, since intellect is unrelated to access to education and thus they could never truly be denied the opportunity. That said, it does take more effort than learning it earlier.

For the first tier, your Sim will need to:

For the second tier:

***Here’s where what I said about historical gameplay comes into play. This action should target items that have the function of a computer, not specific computers. Thus, you could (for example) have your medieval Sims own a book computer or other pieces of custom content like that, to fulfill this condition without breaking immersion.

And for the third and final tier:

Then your Sim will gain the Can Read trait.

What does the Can Read trait do?

You could hypothetically remove the Never Learned to Read trait with cheats but fair warning, from the limited testing I did on removing it with cheats, it’s just going to re-apply itself upon reloading the game if it wasn’t replaced by either the Can Read or Learned to Read While Growing Up traits.

If you want to use this mod for your new toddlers and above, but don’t want to waste much time getting rid of the limitations for your pre-made Sims, I recommend cheating to complete either aspiration rather than cheating to remove the trait, since this way it should be properly replaced.


Why does this exist?

Historical gameplay and realism, mostly. No disrespect is meant towards anyone who may have reading difficulties. This mod is simply meant to bring forth consequences for not meeting the game’s pre-existing trigger for learning to read.

Well, I’d like to give weight to more of the toddler skills if possible, but they aren’t all as straight-forward. So, sadly, no promises on a timeframe there, or that all skills will receive a similar treatment. I intend to try.

What happened to the other 46 versions?

This wouldn’t have been possible for me to do without Zerbu’s Mod Constructor and The Sims 4 Studio. They are exceptional programs and I thank their creators for making them.
Files Need help with downloading or installing content? Click here!