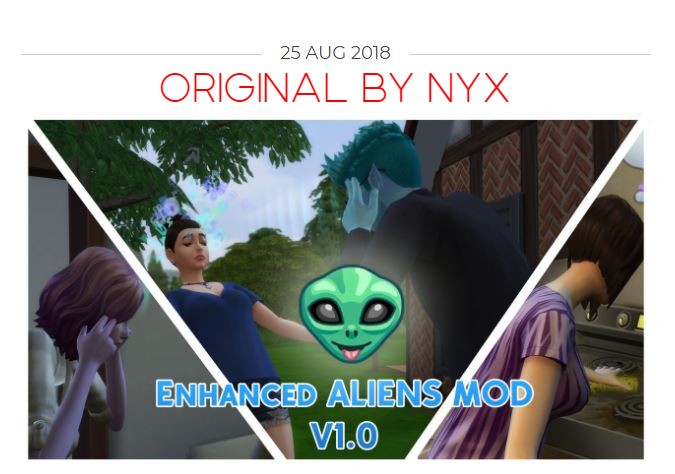 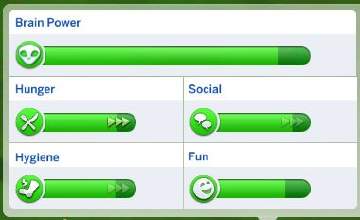 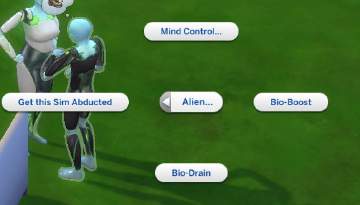 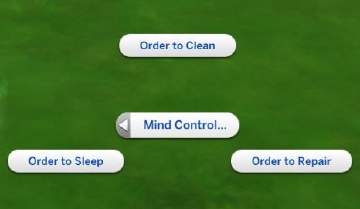 I am aware there might be some confusion as another user and I accidentally fixed it at the same time, though in different ways. My version of this mod makes all aliens Enhanced Aliens so long as they are Teen or older. If you prefer to have your Aliens unlock it via reward store and automatically upon aging up, I recommend you use GOOD_BOYgoneBAD's version instead. Otherwise, if you have any other mods that affect rewards, then mine might fit more easily, since we edited the broken parts of the mod in different ways. See more details about the resource changes near the end of this post !

I DID NOT MAKE THE ORIGINAL MOD, ALL CREDIT GOES TO NYX. REMAKES ALLOWED AS PER NYX’S SITE.


So, in the process of making my Occult Bloodline mods, I hit a wall at the time of making the Alien Bloodlines because, uhm. Aliens are boring ok. I thought I might have to go and actually make something to, well, make them less boring, but then I found out Nyx’s mod existed. But it didn’t work.

The main issue I noticed was the trait not showing up on Rewards for pre-existing Aliens, nor was it being gained by Aliens when aging up.
UPDATE: It's automatic now. Have fun.

The other issue, which I found out about thanks to the S4S forums, was that Brain Power was not regenerating via any of the actions that supposedly restored it.
UPDATE: Both the original Restore Brain Power interaction and any interaction that makes your Sim have the [Asleep] mood should trigger regeneration of Brain Power.

Aside from those fixes, the Mod is as the original was, which I’ll detail below. I couldn’t find the original MTS post so I’m just linking a post I found about it. If anything else is broken that I didn’t notice, please let me know and I’ll get to it!

All Alien Sims who are age Teen or older become Enhanced Aliens. You no longer need to send your Enhanced Alien to sleep for this to trigger. Aging up to Teen in-game should also now properly trigger them.

Once your Aliens are Enhanced Aliens, they'll be able to:

There is some overlap between the resources edited by my version and GOOD_BOYgoneBAD's, namely the Alien Interactions:

Unless you use mods that affect the Buyable Trait Tuning and/or AgeUp Interactions involved in their version, I recommend GOOD_BOYgoneBAD's version.

Addon: The new Overpowered reward trait (requires XML Injector to show up), which cost 10k aspiration points, will enable Aliens to drastically slow down the decay of their Brain Power when not in use.

Languages:
ONCE AGAIN, ALL CREDIT TO NYX.
Custom Content

– Other
Back to top