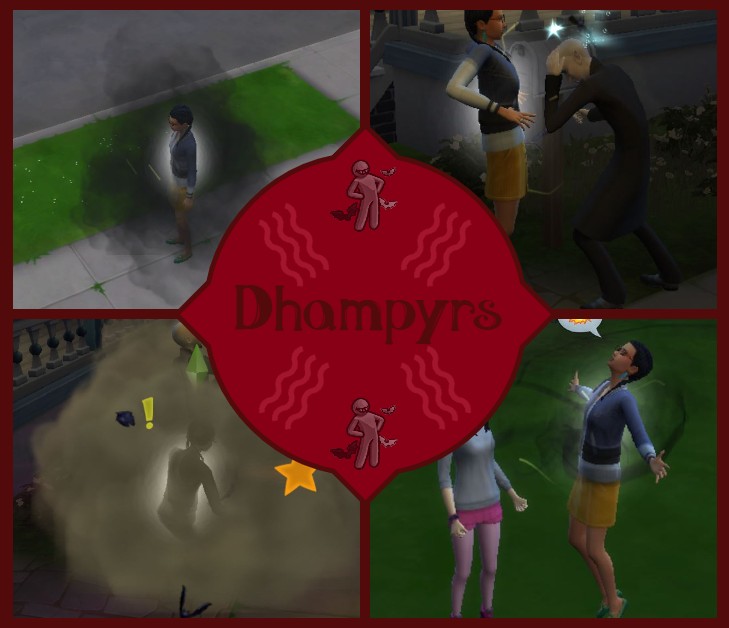 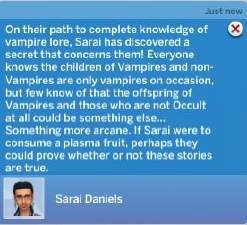 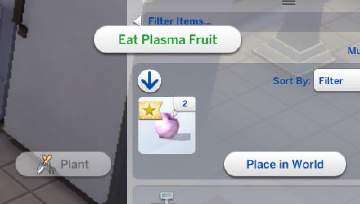 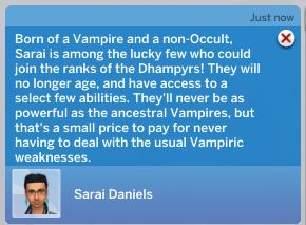 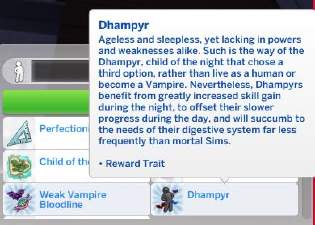 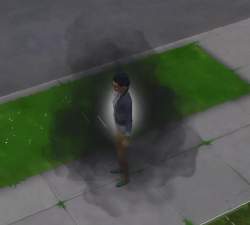 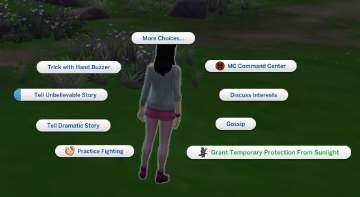 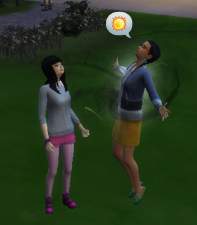 You no longer need to follow a complex process for your Sim to become a Dhampyr.

p.s. the sunlight reversal buff is still there, your Vampires will just now need to drink from the Dhampyr to obtain it, so it's no longer super easy to hand out


You know, I realize probably few people actually care for the context as to why particular mod exists, but I'm also aware my ideas have something like a 50/50 chance of appearing completely unrelated, so I still feel the need to explain. The lack of hybrids in the Sims game in general seems unrealistic (how unrealistic that my Aliens and Spellcasters can't have wizardry half-Alien offspring smh), given how under normal circumstances one would expect their children to be something new... But hey, I'm not here to do anything about Occult+Occult combos. Let's talk about Dhampyrs.

I have a thing for tvtropes, at times even treating the pages as a place in which to look for ideas on what book to read next, and one such page is that of Dhampyrs, the offspring of Vampires and humans. In the Sims, the children of Vampires and non-Occults can be either, because the Sims are mean and don't like hybrids.

So let's fix that, let's get some Dhampyrs. (Note that this isn't meant to represent any culture's particular depiction of Dhampyrs, and has to work within the constraints of the Vampire system in-game)

Fun fact, while looking up the translation of Dhampyr for my translation, I ended up stumbling upon the Dhampiro wikipedia page, which features a line too legendary to not be mentioned here. Namely, here's the definition of Dhampyr, for those who don't know, and also because I find this particular phrasing hilarious.

Anyway, while Dhampyrs (and apparently humans, according to that wikipedia page) may be fictional creatures, but the world of the Sims need not abide by silly rules!

First of all, you need MAL22's Trait Tracker Injector for this to work.

Whenever an OccultVampire and a nonOccult Sim have a child, there is a chance they might be a Dhampyr if they aren’t born a Vampire. Like Vampires, they’ll have to wait til they’re Teens to fully manifest, mostly because their half-human nature makes them develop a bit more slowly and also because the animations would look absolutely cursed.

Upon becoming a Teen, your Dhampyr will gain access to Dark Meditation, Drink Plasma, and a randomized set of 5 abilities. They’re Vampire Perk powers that could reasonably be converted for them, now manifesting as traits for them. Note that there's a small chance they might initially spawn with less than 5 upon becoming Dhampyrs because of how I ended up having to set the randomization up, but if this happens, they should end up at 5 upon re-instancing either by travelling or being reloaded into a lot.

Vampire Sims will get temporary sunlight protection if they drink the blood of a Dhampyr, and Dhampyrs are resistant to some mind control abilities.

2.0 currently has in-game strings for all languages.

Details that only apply to v1:

Becoming a Dhampyr requires some effort, and does not happen automatically. Should any non-Vampire child of a Vampire reach Level 15 Vampire Lore, their extensive knowledge of the subject will enable them to unlock a particular detail. Namely, that if they, as the children of a Vampire, were to consume a Plasma Fruit, they would fulfil their true potential as a Dhampyr.

(so basically TL;DR: those are the two steps, if your Sim is a human born of a non-Vampire parent, eat a plasma fruit after reaching Vampire Lore Level 15, and you will become a Dhampyr)

Careful with that decision, though! Dhampyr conflicts with Vampire, so your Sim will not be able to become a Vampire... for as long as they live, that is (more on that later).

Once your Sim is a Dhampyr, they'll gain access to a few perks!

That's it? You may be wondering, isn't that a bit weak in comparison to Vampires? They can't even pick their own perks! But that's the price they have to pay. They, after all, don't have to deal with the weaknesses that plague Vampires. Does that not seem fair?

And alas... should a Dhampyr die, the next time their ghost loads into a lot (simply leaving your urn does not count, apparently you need to actually load into a lot, in spite of my attempts to make it instant), they will resurrect as a Vampire, having lost their Dhampyr powers forever. They'll gain Vampire XP a bit faster than the average, though. The Dhampyr trait cannot be regained normally after this point, even if your Sim is cured of vampirism. It'd only, hypothetically, be possible if you cheat your Vampire Lore skill back down and try to re-trigger the initial unlock conditions.

If you have any comments in regards to the selected abilities, feel free to share your opinion, as I had a hard time picking and choosing those myself.

Vampire Bloodlines
Back to top