Some Meals as Desserts 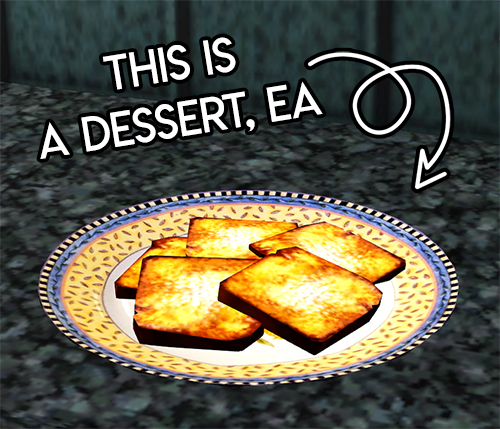 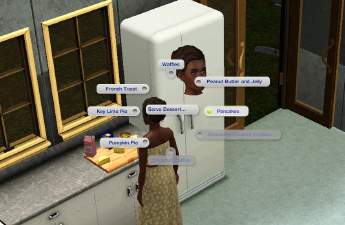 455 Downloads 31 Thanks  Thanks 11 Favourited 3,427 Views
There is an update available for this mod! Last downloaded: , creator last updated:

Created by sweetdevil View Policy / About Me View all Downloads  Tumblr

Update: changed the wording from "compatible with" to "includes the changes in". Phrasing is difficult, apparently. Files remain unchanged, you don't need to redownload anything; this is just to prevent confusion.

Ever get tired of scrolling through the many recipes to find the one you know is sweet but is inexplicably categorized as a main course? Ever get mildly inconvenienced at EA categorizing pancakes as a non-sweet meal? Then this is the mod for you!

Flavors (use only one!)

2. Includes the changes in Twoftmama’s Meals Anytime mod. This in turn has two flavors:
2.1 Meals anytime + Some Desserts: all meals available to cook anytime, and my recategorization of the above-mentioned ones as desserts
2.2 Meals anytime + Some Desserts + Ambrosia group meal: same as the version above, and you can also cook Ambrosia as a group meal

Just open the XML in a text editor and delete the
Code:
line in the recipe’s section.

To fix conflicts with other mods, simply open those other mods and copy/paste the line above (with the < and > changed, of course) into the section of each recipe you wish to change.

As desserts can only be prepared as group meals, you can no longer make single servings of Waffles and Pancakes.

This mod conflicts with anything that edits the RecipeMasterList XML. This includes Twoftmama’s Meals Anytime mods. Use either mine or hers.
Conflicts with this too: Cooking and Ingredients Overhaul + More Nectar Ingredients
Should not conflict with script mods.
Other Information