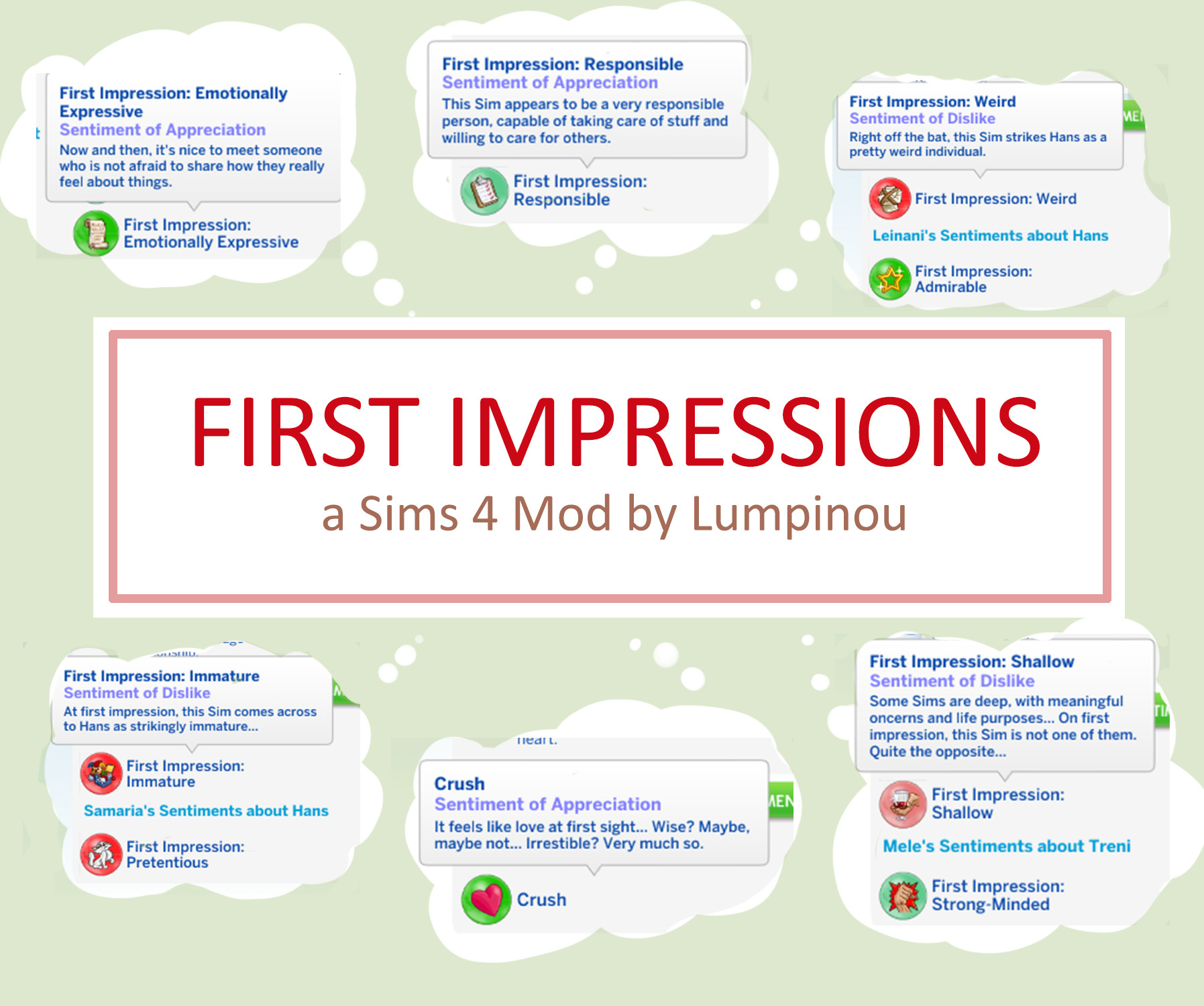 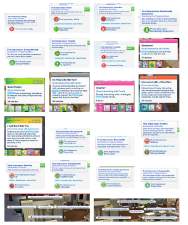 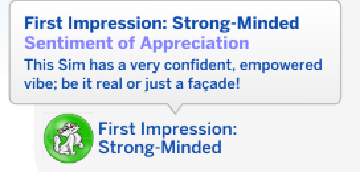 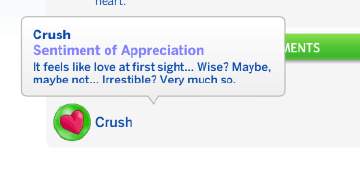 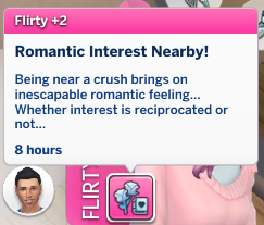 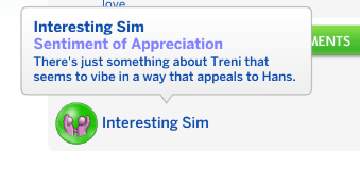 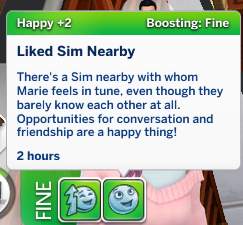 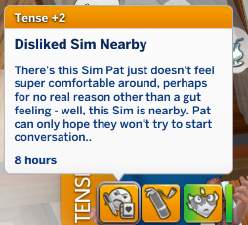 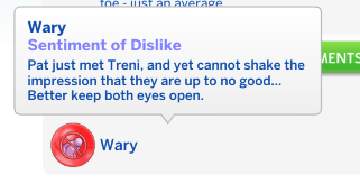 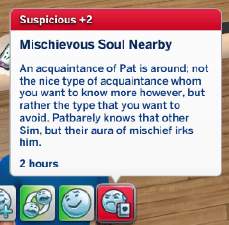 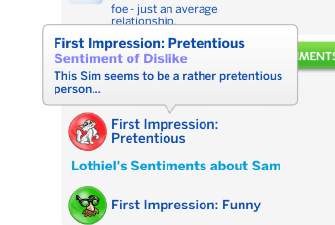 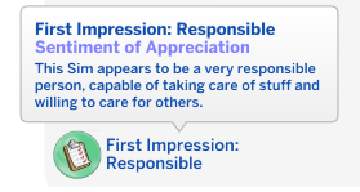 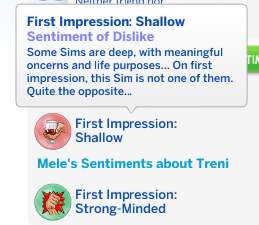 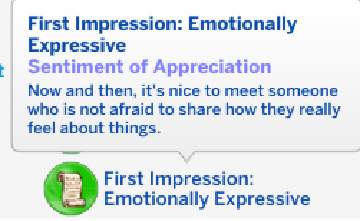 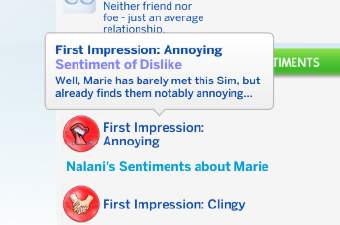 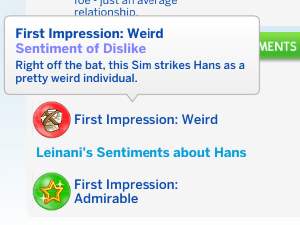 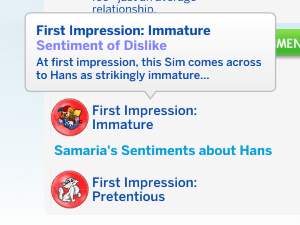 It makes it so that when Sims meet for the First time, they'll develop First Impressions towards each other. The first impressions are visible as sentiments in the Sim Profile's relationship panel.

If we want realism, not all Sims should get along with every Sim right off the bat all the time! This mod is there to change that

Sims get first impressions on each other based on their own trait and the other sim's traits, so it is never just random!
Examples:
- a cheerful Sim could likely be seen as 'annoying' by a loner or mean Sim, whereas an Outgoing, Bro or Good sim is more likely to see them as good company!
- a Loner sim could be seen as capable & independent (more likely judgment from similar personalities or positive sims), or as cold and distant (more likely for sims who are warm, people persons!)
- a snob sim is more likely to find a childish sim to be immature, whereas a goofball sim will probably find them funny, a good sim might find them imaginative, etc etc.

Disclaimer: Note that this mod has a positive and a negative counterpart to everything! No trait can be judged only negatively. This is all in good fun and not meant to promote being judgemental or mean. In the Sims, mean Sims occasional rejoice about the demise of others, so I believe this fits in. But just
as a disclaimer, know that I advocate only respect between everyone. Our differences enrich us, and what one person sees as annoying, another
will love. This is on this concept of point of view VS hard truth that I built this mod – making impressions points of view and certainly not hard truths.

The system, step by step

– Sims meet each other, ie, use an introduction interaction. Nice to meet you (or not)!
– The system looks at the newly encountered Sim’s CAS / Personality traits.
– It picks one trait to look at more closely. Call it the dominant characteristic at that moment, that pops out to the other Sim.
– Once that is done, it looks at your Sim’s traits – possibly focusing on one in particular that would drastically change the outcome with the other Sim’s trait under study (good or evil for example, or ‘loner’ in the case of another Sim who is ‘outgoing’, etc – it all depends on trait pairs) – and decides accordingly what possible First Impressions are available.
– Among those, it chooses one.

On varying reactions about the same traits

Will Sims always see one trait the same way? No. Sims may feel nicer towards some than others even for the same trait because there is a bit of chance left to this. However, this is not true for traits that truly clash, or traits that truly match. In a case of a true clash or a true match, the outcome is more predictable (for example, a Sim who is self-assured will look at other self-assured Sims positively more often than other Sims IF on first encounter, that is the trait that stands out to them (ie if the system decides to look at this specific trait).
The system tries to emulate a First Impression, ie an impression based on only one dominant facet of personality as exposed at this specific moment, and not a full picture).

– Moodlets will pop up in proximity to crushes, anti-crushes, untrustworthy and interesting Sims.
– Moodlets can happen after interacting with Sims with whom a first impression is shared. They are very likely
to happen when interacting with a crush, anti-crush, untrustworthy or
intereting Sim. They are less likely the rest of the time otherwise
you’d get flooded with moodlets. There are a few different moodlets
based on first impressions. See image gallery. Three possible moodlets can be obtained after interacting with a Crush, for example.

– First Impresssions mildly impact romance and friendship development (note: I will eventually update Road to Romance version A and C so that the impact of Romance development be impacted more strongly by negative First Impressions if those two mods are installed together).
– First Impressions impact autonomy (to a minor degree) towards entering an interaction context with other Sims. For example a Sim is 4 times more likely to start interacting with a Sim they crush on than with a standard Sim.


WithTimeDecay version: In this version, first impressions decay away with time, in addition to the other ways they can be removed (read next paragraph or explanation of sentiments at the bottom of this page for more info).

NoTimeDecay: In this version, time has no impact on the impressions, only contact does.
Every time a new sentiment tries to be added or gets added, impressions will take a hit, until they’re gone. This is true in the other version too, the only difference is that one has time decay (sentiments lasting 5 days and gradually leaving, and able to leave quicker if other sentiments are being added) and the other has all that but without time decay.
For more info on how sentiments come and go, read the bottom of this page.


Optional Module: Post-Conversation Moodlets
This module contains the post-converqation moodlets that pop up sometimes when conversing with Sims towards whom certain First Impressions exist. If you don’t like this feature, you can remove that module.


---- About custom traits and traits not taken into account ----

If a custom trait or one of these traits is present:
– the system will skip it.
– If there are only unreadable traits, the system will default to giving out either the ‘Crush’, ‘Anti-crush’ or ‘Interesting’ impression.


This mod REQUIRES the Mood Pack Mod (by me as well). If you do not install it too, you WILL get UI crashes if you get some moodlets from the First Impression mod.

The File for the Mood Pack is included in the Download Tab for First Impressions!!

The 'Mood Pack' is a Mood Bank for mods. It contains dozens of custom moods, and nothing else. It does nothing in itself, it's just a bank of moods that sits there. When a mod wants to use a custom mood, it calls to the Mood Pack, which provides that, and then goes back to sleep. It is a resource used by various modders in various mods.
From the Mood Pack, First Impressions uses the moods: Wary, Insecure, Weirded Out, and Affectionate.

Some of the effects of First Impressions as listed in the ‘background effects’ subsection will work ONLY if the Parenthood game pack is installed. The mod will work fine if you don’t have that pack, you’ll just be missing the effects (impact on friendship and romance). Once I have updated Road to Romance to include this mod, you will be able to have romance effects through that whether you have Parenthood or not, if you use Road to Romance.
Other Information

Choose ONLY ONE VERSION!! Either with time decay, or without, NOT BOTH!!

Don't forget to Also GRAB THE MOOD PACK FILE on this page if you don't already have it!

3. Make sure that script and package are either directly in your Mods folder OR in ONE subfolder maximum, or the script file can't be read by the game. This is true of ALL mods with a script file, by the way.

3. Make sure that script and package are either directly in your Mods folder OR in ONE subfolder maximum, or the script file can't be read by the game. This is true of ALL mods with a script file, by the way.