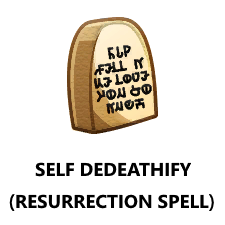 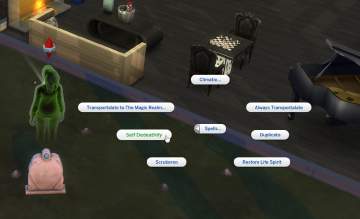 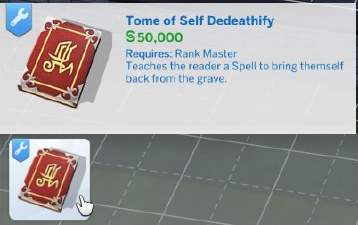 Created by Evoc
View all Downloads
Uploaded: 14th Jul 2022 at 1:06 PM
Updated: 14th Jul 2022 at 10:31 PM
Mod Overview
Have you ever thought it's weird how spellcasters have the ability to bring others back from the dead but not themselves? Yeah, me too and after years of playing the Sims 4 I've had enough ambrosia and RNG with the wishing well for a lifetime.

Introducing Self Dedeathify! This allows sims to cast a spell to resurrect themselves. This works exactly the same way as Dedeathify does, in fact I'm using the same interaction effects for the spell.

To try add a little balance, if the spell fails the sim gets the failed resurrection buff (Now Who To Call?) which lasts for 24 hours, this prevents them from being able to resurrect themselves or others until the buff expires.


How to unlock the spell
This spell can be unlocked by either practising untamed magic or from winning duels once you reach rank 4 "Master".
A "Tome of Self Dedeathify" can also be bought from the build mode for §50000 simoleons.


Updates
Version 1.01 - Fixed some text not displaying correctly for non-English languages, it has not been translated though it can be done later if requested.

Description: Requires: Rank Master\nTeaches the reader a spell to bring themself back from the grave.

Mesh name: Tome of Self Dedeathify