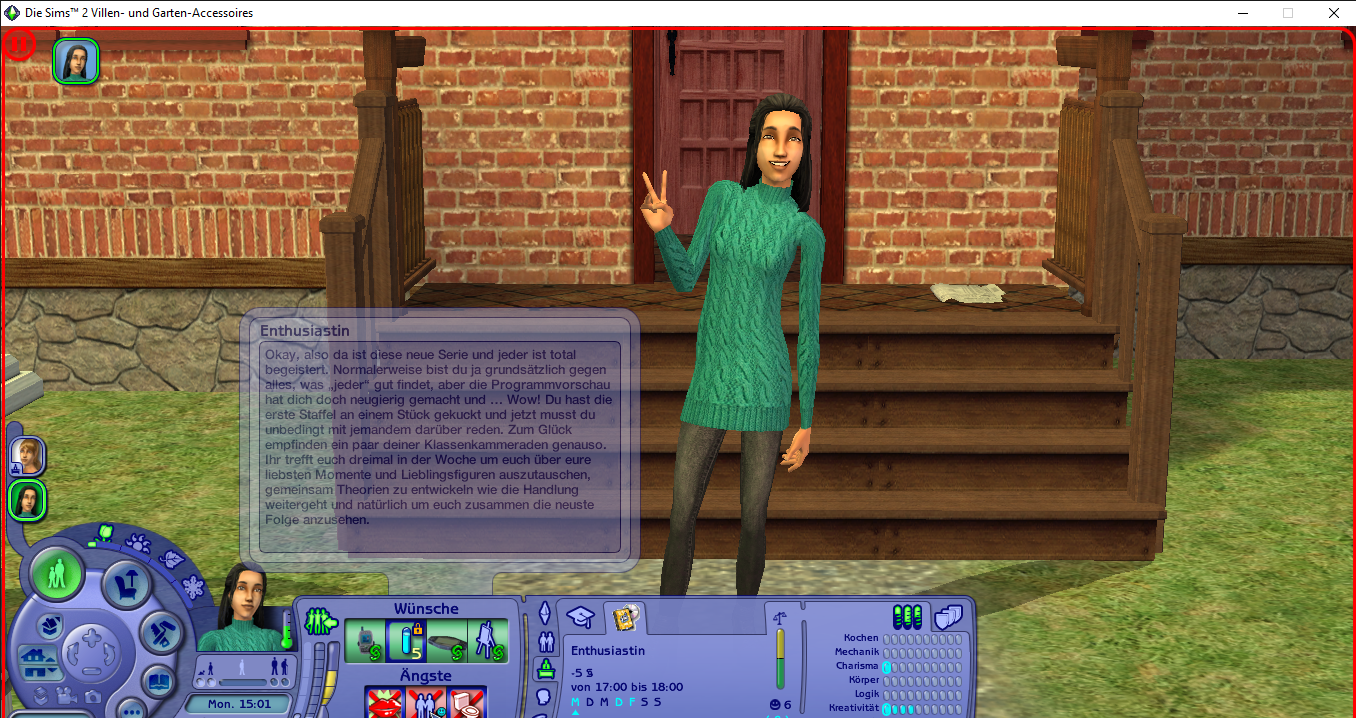 140 Downloads 7 Thanks  Thanks 2 Favourited 766 Views
Created by Jonas510
View all Downloads
Uploaded: 26th Sep 2022 at 1:19 PM
Well, it's probably pretty obvious which show I had in mind, but I tried to make it as neutral as possible. Let your sim teens experience the full spectrum of a great new streaming experience.

All levels have chance cards. The complete "career" is available in English and German.
The icon is from ingame. The career has its own GUID and I linked it with the journalism career.
I use the UC but it's a simple teen career so it should work with seasons, the EP that introduced the journalism career.

As I would say on another site, if you like it leave kudos and comments.

Okay, so there's this new show and everyone is totally into it. Normally you're against anything that "everyone" likes, but the previews made you curious and ... Wow! You watched the first season in one sitting and now you really need to talk to someone about it. Luckily, some of your classmates feel the same way. You meet three times a week to share your favourite moments and characters, theorise together about how the plot will progress and, of course, watch the latest episode together.

Tonight is the season finale. The only problem is that it's also your grandma's birthday. Of course, you could still watch the episode tomorrow, but everyone will be talking about it tomorrow. And you wouldn't miss Grandma's whole birthday, just two hours or so. Choices, choices.

Choice A: Grandma's birthday
Positive: You can easily lose yourself in a fictional world, but your grandma is still a real person and more important than any fiction. You get one logic point for this insight.
Negative: You go to your grandmother's birthday party, but you are in a bad mood the whole evening and spoil the party for many people. You lose one charisma point.

Choice B: Season finale
Positive: You tell your grandma that you would like to watch the season finale, but that you will come straight afterwards. Your grandma agrees, but only if you don't spoil the episode for her. You realise that grandma watches the show too, you totally freak out and win a charisma point.
Negative: You meet up with your friends and watch the season finale. When you finally arrive at your grandma's, the party is almost over and when grandma asks you where you've been, you suddenly feel quite embarrassed. You lose one Charisma point.

Honestly, you've never been this interested in a fictional relationship before. But these two characters just belong together. Maybe it's because it would be the logical progression of both their relationship and the plot as a whole. Maybe it's also because there seems to be such chemistry between the actors. The way they communicate with their looks alone. You can only hope that the writers got that too. And above all: Kiss her already, you idiot!

Are your club members actually completely nuts? They've all jumped on the wrong ship. It's still fun to watch the latest episode together, but the subsequent discussions lead in the completely wrong direction. Do you want to convince the others of your opinion or do you try peaceful coexistence?

Choice A: Discussion
Positive: Of course there are always a few stubborn cranks, but you can convince most of them of your point of view. It makes much more sense! You win a charisma point.
Negative: Not only do they just not want to see it, your club mates accuse you of not understanding the basic premise of the show. You don't want to seem petty, so you continue to watch the show with the others, but you don't bother with the subsequent discussions. You lose a charisma point.

Choice B: Coexistence
Positive: At the moment everything is still vague enough that you can let the others have their fantasies, however nonsensical they may be. Sooner or later they will go along with it. You are rewarded with a logic point for your reasonable attitude.
Negative: You decide to keep your opinion to yourself, but suddenly you don't enjoy your meetings at all. They just won't stop talking stupid stuff. You lose one creativity point.

So, you still think it's the best series to ever flicker across the TV screen. At least the first six seasons. Because honestly, what were the writers smoking? Or the producers? In any case, someone has gone crazy. All the characters suddenly ignore all the hard lessons of the last six years. The plot picks up speed rapidly, but in the completely wrong direction. And then the wrong ship too! After moaning and grousing for a while, you've decided to channel your frustration into more productive channels. You may not be able to change the "official" canon, but you can write your own. And you are sure that there are many who will be happy to have an alternative. Well, another alternative, because the community is already quite active. All the better, because most of them seem to be swell people. You can't wait to read the comments on your first chapter.

Okay, you had this totally crazy idea for an AU. But you'd have to rewrite pretty much everything, starting with episode one. And actually, up until season six, you thought the plot was fine. Do you still want to try this experiment or would you rather continue writing your existing AU?

Choice A: New AU
Positive: You've already written your correction for seasons seven and eight, so why not try something different? Afterwards you can still decide which version is "canon" for you. In your new AU, you even manage to save one or two of your favourite characters from the first seasons. You get a creativity point.
Negative: You throw yourself into writing, but halfway through you realise it's all rubbish. You delete the half-finished story and lose a creativity point.

Choice B: Post canon
Positive: The reactions to your AU, which you built on the smallest possible changes with a big impact, were quite positive. So why not continue the story at this point? You write a small story about the next generation and your fans are quite enraptured by your OCs. You win a creativity point.
Negative: You try to keep the story going, but it's actually all been said at this point. You get completely bogged down in your post canon and finally give up. You lose one charisma point.
Archive: TVClub.zip
File: TVClub.package Career/Major Unknown