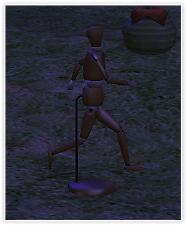 278 Downloads 43 Thanks  Thanks 11 Favourited 2,546 Views
This download has been published by the creator but not yet checked by staff.
Created by kestrellyn
View Policy / About Me View all Downloads
Uploaded: 25th Jan 2023 at 4:05 AM
This is an object for listing all of the romantic relationships in your neighborhood, and fixing broken relationships between sims who have never met. I originally made this for people use who use Lazy Duchess's Story Progression hack, since with that hack relationships happen offscreen without your input, so I found it useful for keep track of who was dating whom. After I made it, I noticed that it would find incorrect relationships between sims who had never met, and that those relationship flags were in fact set in the neighborhood when you opened it in SimPE. I thought at first that these flags should not cause any problems, but have learned since then that they do - sims may not be able to get engaged because they are marked as being engaged or married to a random townie they have never met, and once I had a sim get randomly slapped by a walkby he had never met because she had the married flag with him. To be clear, this doesn't cause corruption, but it does cause annoying glitches, and it is very hard to resolve if you have a large neighborhood and can't sort through every single sim looking for the incorrect flags. So now this object has two functions - finding legitimate romantic relationships, and fixing incorrect relationship flags.

Note that this only fixes flags between sims who have never met. If two sims who have met have their relationships messed up, which is also entirely possible, you'll have to fix it in-game with the Sim Blender. However, this should be relatively easy to notice, since the sims will show up on each others' relationship panels. I have no idea what causes relationships to become messed up like this, so you may have to rerun the fix relationships function from time to time.

The object looks like the running sim statue, is in Misc/Misc, and costs 0 simoleons. It has three options: Choose Relationship Types, Find Relationships, and Fix Never Met Relationships.

Choose Relationship Types opens a submenu where you can configure exactly what types of relationships you want the finder to find. Each of marriage, engagement, going steady, in love, and crush can be individually included or excluded. If the option says, e.g. "Include Marriage" that means marriage is currently excluded and you should click the option to include it, and vice versa. The finder will only find relationships of the type that are currently included. Note that sims can have multiple flags set, for example married sims are usually also in love and have a crush on each other. If all three of those are included, only the highest status (marriage) will be shown in the finder, but if you exclude marriage, the finder will report that they are in love instead, and if you exclude in love the finder will report that they have a crush on each other. Relationships will only be shown one time when they are reciprocal, instead of showing it for both sims.

Find Relationships will run the finder, using the current set of relationships you have included. It is very spammy. I recommend unpausing the game for a few seconds, then pausing it, and then waiting for the notifications to stop scrolling, then reading the notifications, and then optionally deleting them before unpausing for another few seconds. The notifications will delete themselves eventually if the game is unpaused, but they stay up for a while. This option will only show you relationships between living sims who know each other and are teen or older.

Fix Never Met Relationships will find all inappropriate relationship flags between living sims who do not know each other, and clear them. It will clear every relationship flag except for the family flag. The family flag is also unfortunately not guaranteed to be correct, but checking if the sims are actually family or not would make this process intractable. Anyway, this may also be spammy, but there will probably be many fewer incorrect flags than correct ones, so there should be fewer notifications. If you have a brand new hood, there may well be no incorrect flags at all yet. When this process is finished, there will be a notification that says "Finished".

This should be compatible with all game versions.

This is a new object with no overrides, so it should not conflict with anything.
Files Need help with downloading or installing content? Click here!

– Fixed : Fixed Maxis Mistakes
– Object Mods : Object Interaction Mods (things that change how sims interact with objects or their environment, like "Multi-owner door" or "sunbathe anywhere")
Back to top