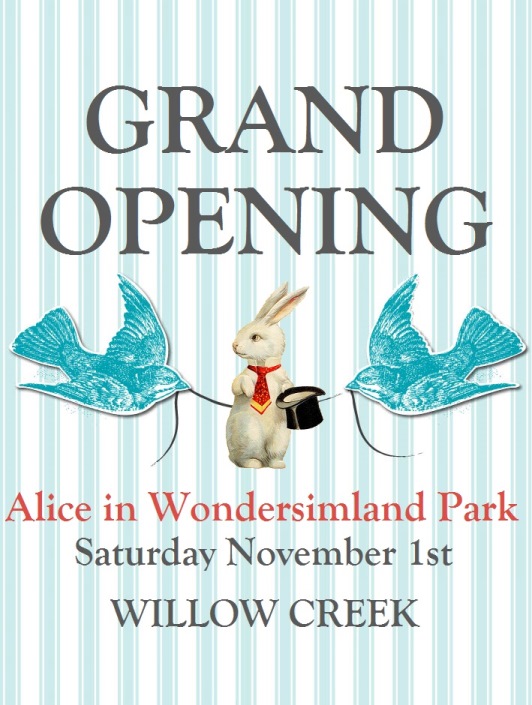 For the opening of this themed park, we were honored by the presence of special guests: Alice, her parents and the Queen of Hearts

This is Alice in Wondersimland Park, a huge park that tries to remind (at least a little) the story of Alice in Wonderland. There're paths to walk calmly, different garden styles, a labyrinth, a place for having lunch and where children could play. Everything is set in XIX century ... (ok, maybe somethings aren't so "XIX century" but intention is what counts ;P).

There're also 4 toilets, one barbeque and one barcounter.

The CC's used to create Alice in Wondersimland Park were:

I used the sims you see just for taking pictures as a way to show the size of the objects in the lot. So if you want them, I wrote down where you can find them and also the specifications I used (clothing, accessories, hair, skin...).

Many thanks and all the credits of these beautiful and amazing sims to: HSF for Yumi-Model 03, Svitlans for Sofia, xChiiQax (origin ID) for Joel and shauna_plumbob (origin ID) for Diana Wallace. I also credit cc wardrobe, accessories, makeup, hair, skin tones and eyes I used:

Diana as Alice: I rejuvenated Diana Wallace (ID origin: shauna_plumbob) and dyed the hair. I used Alice in Wonderland Costume by Belle, a child cameo by Shylaria, and for her skin S-Club WMLL thesims4 BASSIS skintones I by S-Club.

Sofia Vilmont as Alice's mother: you can find her HERE by Svitlans. Once you click Download, it opens another window where you can find the download and her specifications (hair, skin, eyebrows, eyeliner, eyes download links). I've dyed her hair and she wears Long Dress Floral Formal by Dianama.

Joel as Alice's father: you'll find Joel at ID origin: xChiiQax (he's with a sim girl called Ellie, from the game Last of us). I changed his hair for one from the game. He wears the suit MobBoss Unhidden by puremorphin and a monocle called Monocles for your spiffing sims by count_cosmos.

Yumi-Model 03 as Queen of Hearts: she's created by HFS and you'll find her HERE. You will also find there her specifications (skin&eyebrows). I changed her hair and used the Side Ponytail by David Sims. She uses Queen of Hearts lips by decayclownsims. The dress and gloves she wears are Vampire Gown Conversion by Kiara Zurk (the rar archive that Kiara attached has both, the dress and the gloves). And finally, the earrings are the Gothic Earrings 01 by Ladesire.

Back to download view
25 Comments / Replies (Who?) - 5 Feedback Posts, 19 Thanks Posts
Hide Thanks Posts for this thread (Show only feedback)
Page 2 of 2
VerDeTerre
Mad Poster
THANKS POST
#26

Awesome job and awesome idea! Love how you came up with the best use of the ability to make things very large.