More BITS! An Overhaul of The Sims 3's Soundtrack

Back to download view
64 Comments / Replies (Who?) - 54 Feedback Posts, 8 Thanks Posts
Hide Thanks Posts for this thread (Show only feedback)
Page 2 of 3
mypantsfelldown
Lab Assistant

Quote:
The two files near the bottom of the download. One is called 'Junkie XL - CAS, Build & Buy' and one is 'Steve Jablonsky - Karma Loading Loops'.

@nitromon has reported issues with the map music in some instances that can cause the game to crash. If you are experiencing any crashes on the map screen and/or you are running the game through a junction folder, this could resolve your issue.

Here is a link to a Google Drive folder with individual archives containing CBR map music and a combined package file version.
nitromon

Thanks man, this must be incredible work. Preciate it!

Quote:
Did you try the VBR version first? I just tried the CBR version and doesn't seem to work at all. I have no idea what happened! I'll look into this as soon as I get time. Apologies!
ToonElectrocrash

Quote:
The VBR version is uploaded here. Alternatively, you can find a combined package file of the VBR music here. The combined package obviously requires all expansions and contains all stereo music + extra tracks.
ToonElectrocrash

Quote:
Yes, VBR works fine for me too. Nitromon reported that when running the game on a RAMdisk, it would become unstable and crash in map mode using VBR music. He said CBR music was more stable, so I made another version for him to use. I may have somehow mismatched the files when uploading the CBR music, but from what I can recall it worked absolutely fine when I last tried it.
ToonElectrocrash

"WELCOME TO THE WOOOORLD OF TOMORROW!"
Andrew66523

As a music junkie, I always thought the console music and official releases rocked! I first play TS3 on the Wii (Garbage mistake from my mom to get that) and some of the songs were good (well, just the console music but only the CAS music has all of it on the Wii), with my disappointment when I played it on PC of the music, although the discoveries took strangely long, it was definitely worth the wait!
I used to make dumb mods when i was bored, next time i'm bored i'll make a new mod.
mypantsfelldown
Lab Assistant

Quote:
I think it's related to how the game loads the custom audio. I have to use an alternate method that loads the entire audio file into the memory at once, as the game throws a tantrum if you try and load custom audio the same way as original game files. Usually, music MP3s are streamed straight from the file. Regular, shorter duration sound effects are just loaded fully into the memory because they're so small. Custom music doesn't work that well using the streaming method so I have to load it all at once instead, which obviously uses more memory. It shouldn't be that much of an issue as the music tracks are 8MB max, but maybe I'm wrong.


Quote:
I've never played the console editions of Sims 3, so I never realised they made new music. I have to admit: at first, I wasn't too keen on the console songs. But I added them to this mod knowing that a lot of people probably felt nostalgia listening to them. After playing for a while, I've really grown to love the new music. To me, it's the same as the music Junkie made for Sims 2. As much as I love Jablonsky and Mothersbaugh, Junkie's approach to Sims music is always a breath of fresh air.
__blue__
Test Subject
#38

Listed bug ist not caused by this mod
@mypantsfelldown

You wrote the following in the mod description:

Important: This bug is not caused by your mod, it's a bug that already is in the game.

I noticed it several times before, without mods installed or anything else altered.

By the way, huge thanks for your engagemant and love you've put in your Music-replacemants. Love it!
mypantsfelldown
Lab Assistant

For those that are experiencing map crashes, I remade the CBR version of the mod and it appears to work fine in my game. I have no idea what happened to the original version but you can try the new version here. For now I'll just leave a combined package version for testing purposes (your game will be fine if you don't have all of the expansions). Please let me know whether it helps at all.

Quote:
Thanks for the info! I'll correct the description now.
Epierc32
Lab Assistant
#40

Quote:
Oh gosh. Do you have a low spec computer? At this point it’s probably worth just encoding all of the music as CBR again to see if it helps.
mypantsfelldown
Lab Assistant

UPDATE:
New music! I have added "Bang Bang" by Pretty Lady and the Big D's from Fast Lane Stuff to the downloads. This release was VERY hidden.
Afiz
Lab Assistant
#43

I used to have a low-spec computer. Actually I still have it but I bought a new gaming computer. It messes it up there too.
charmedlp
Test Subject
#45

I experience the same here... The music started getting janky and the game freezed. The game unfreezed for 5 seconds and then the game crashed. I was in Buy/Build and wouldn't consider my PC to be low-end (16GB of memory, 4GB (the max) allocated to The Sims 3)... Love your mod overall, loved discovering new versions of the songs while playing! Had to delete it, though...
mypantsfelldown
Lab Assistant

Okay, it seems like there's a sizable amount of people having issues with this mod. I really wish I could help everybody, but it's impossible to search for a fix when I've had absolutely no issue running the mod myself since I released it here. I've entertained the idea of using the feedback forums for some testing, but that would require a decent enough level of interest to gather any conclusive results. Stay tuned, but I would be wary of expecting any fixes as the issue could be pretty much anything at this point.
Andrew66523
Lab Assistant
DELETED POST
15th Jul 2020 at 12:16 AM

This message has been deleted by Andrew66523. Reason: ooops i became an asshole
mypantsfelldown
Lab Assistant

Update!
Hi all! Just a quick message to let you know that I've updated the mod again, and it should be completely stable now. Please refer to the update box at the top of the upload description for more info.

As always, you can find a combined package file with all of the music for download here. Enjoy!
Windwind
Test Subject
#48

Thanks! Downloading it now

As a self diagnosed audiophile, please allow me to post some tips:

Use foobar2000's build-in ReplayGain feature to normalize volume. Right click selected track in your playlist then use ReplayGain - Scan per-file track gain, then click Update File Tags after the scan is finished. Enable apply track gain when encoding to get MP3s with normalized volume. 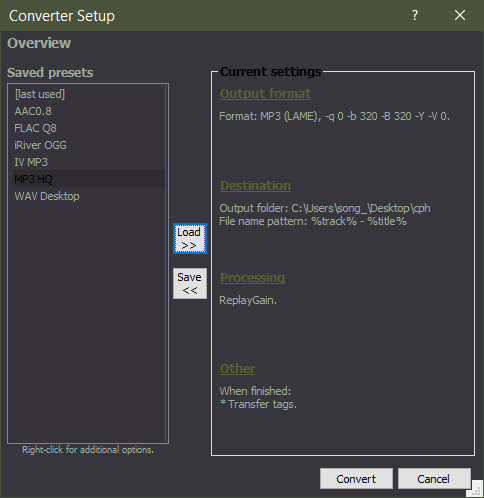