by marvine Posted 2nd Mar 2008 at 11:19 PM
177 Comments / replies (Who?) - 12 Feedback Posts, 13 Thanks Posts
This is a new mesh, and means that it's a brand new self contained object that usually does not require a specific Expansion pack (although this is possible depending on the type). It may have Recolours hosted on MTS - check below the description for more information.
This is a featured upload! It showcases the best talent and creativity available on MTS and in the community. 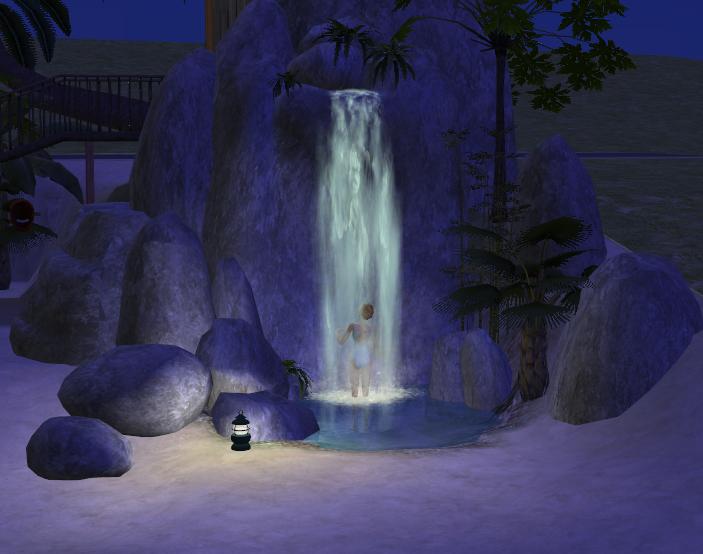 Additional Credits:
Thanks : to Numenor, Echo and Jasana Bugbreeder for their precious tutorials and explanations, to Quaxi and Peter Jones for SimPE and the behaviour editor, to my dear Beosboxboy and Miss Doh for beta-testing.
Tags: #waterfall, #shower, #rocks

Back to download view
177 Comments / Replies (Who?) - 135 Feedback Posts, 39 Thanks Posts
Hide Thanks Posts for this thread (Show only feedback)
Page 6 of 8
Simster 57

I love this, it's always useful, and even if I don't use it as a shower it still makes the garden look great. Now if only there was a matching buyable water, I could make it look like a stream, and make it go down a hill with multiple waterfalls.

Quote:
GREAT tip, and I believe the shower works on Uni-NL-Seasons-BV (no OFB) even w/o any cheats. And I'd been coveting it for a YEAR!!! =)
BrigitteSYW

I don't have Uni or Seasons but this forces it to show in the catalog. However, I still can't use it in my game, it's just not present. Everytime I select it from the catalog, it just doesn't go into the game. Do we HAVE TO have Seasons for this to work????? Anyone knows a way around it????
Tazzianna

I have all eps/stuffs. It's showing up in my game just fine. It occured to me this waterfall will only draw water when in use as any shower would. Is there a fix for that? Also what happens when it breaks? Does the repairman come and fix it?

Going to test it out now. Will report what I find.

Edited Portion:
OKAY~ Wow! So after testing I have nothing but kudos and smiles for the creator of this lil gem!
The waterfall water looks even better in game and comes in a few different colors of rock. The placement is a piece of cake. The rocks to decorate with easily place without any building cheats on. The waterfall water is running constantly. My sim wasn't embarrassed to shower in front of other sims on the lot. She walked out of the water and then got dressed afterwards (thought she was going to spin around into clothes while in the water but was pleasantly surprised it was very realistic).
No idea on the repairman but ... if he comes I think that would be funny really. Could consider him a park ranger I guess.

This might just be one of my fav. must have downs in my game.

Thank you for creating it!
Mrsloveheart
Test Subject
#131

Cool but im not very sure on the bad stuff...
cheshirekat

Oh I remember looking at this waterfall before I got Bon Voyage and couldn't use it. I completely forgot about it until I was looking for some final touches for my medieval-ish neighborhood lots. This will be so perfect in so many ways.

I sat here for a few moments after the download was complete and my brain nearly exploded with all the ideas I have for this in existing lots and new lots.

I'd love to see a huge waterfall as neighborhood deco on the high mountain where my castle is on my little island. Never can get enough of these great items.
My LJ-A few downloads, mostly quiet.
MegatronsPet

Amazing! I needed something like this for my rather earth friendly sims, thanks!

Great idea ! I can't wait to use it in my game ... THANKS !
Malougirl
Lab Assistant
THANKS POST
#136

i love this so much
carmelliadunn
Lab Assistant
THANKS POST

Love this set! thanks so much!!!
topp

Do I really need Open for Business? I'm asking because I LIKE your download so much, and I have all expansions except OfB (well, I have it, but my CD is stratched and it won't copy the most important game files D: ). Thanks anyway,
~DJ
Moonmouse
Test Subject
THANKS POST
#140

This is amazing how did you ever come up with the idea? XD I love it thank you for making it.
505dude

love it
and so do my hippy sims they j adore it.

i dont have bon voyage, is it DEFINATELY required
SimsLemur

What an awesome thing! There are very few showers I found so far which are non-modern but not fairy tale either. This is perfect, thank you!
allison731
Inventor
THANKS POST

Totally adore this item! Funny little story, too, using it. Hobo lot (because, well, I have to have some sims to pick on a little, lol), and this was great for them. Living in a field, no roof, etc. The great part (especially for these sims) was that, once in a while, when they showered, they would forget to dress, and walk around in the nude! Totally horrible for the fellow hobos, but hilarious for me!
xSparrow
Instructor
THANKS POST

Oh wow, this is lovely! Thank you!

These recolours may or may not be endorsed by marvine.