by Morphead Posted 30th May 2011 at 9:08 PM - Updated 23rd Jan 2012 at 3:51 AM by Morphead
279 Comments / replies (Who?) - 8 Feedback Posts, 17 Thanks Posts
This is a new mesh, and means that it's a brand new self contained object that usually does not require a specific Expansion pack (although this is possible depending on the type). It may have Recolours hosted on MTS - check below the description for more information.
Picked Upload! This is a picked upload! It showcases some of the best talent and creativity available on MTS and in the community. With a host of new items for the most lived-in rooms in your Sims’ homes, including a slick new stairs, a next-gen stove for the killer kitchen, modern furniture for the most contemporary living room, and more, your Sims can now give their homes an ultra-modern makeover! 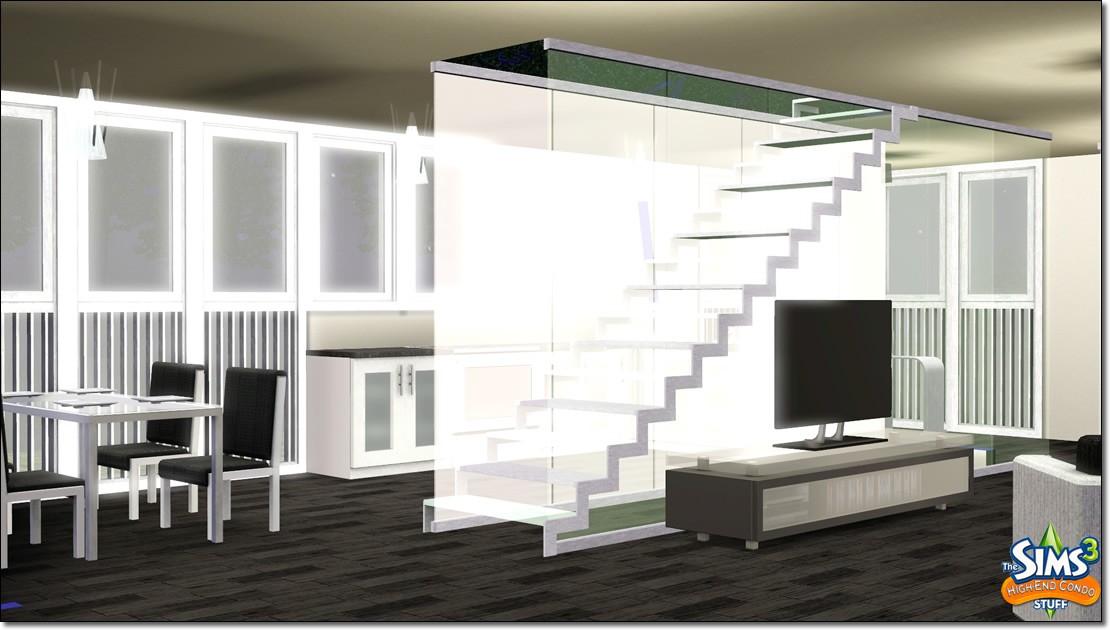 If you need more info, see:
Back to download view
279 Comments / Replies (Who?) - 57 Feedback Posts, 217 Thanks Posts
Hide Thanks Posts for this thread (Show only feedback)
Page 1 of 12
Morphead 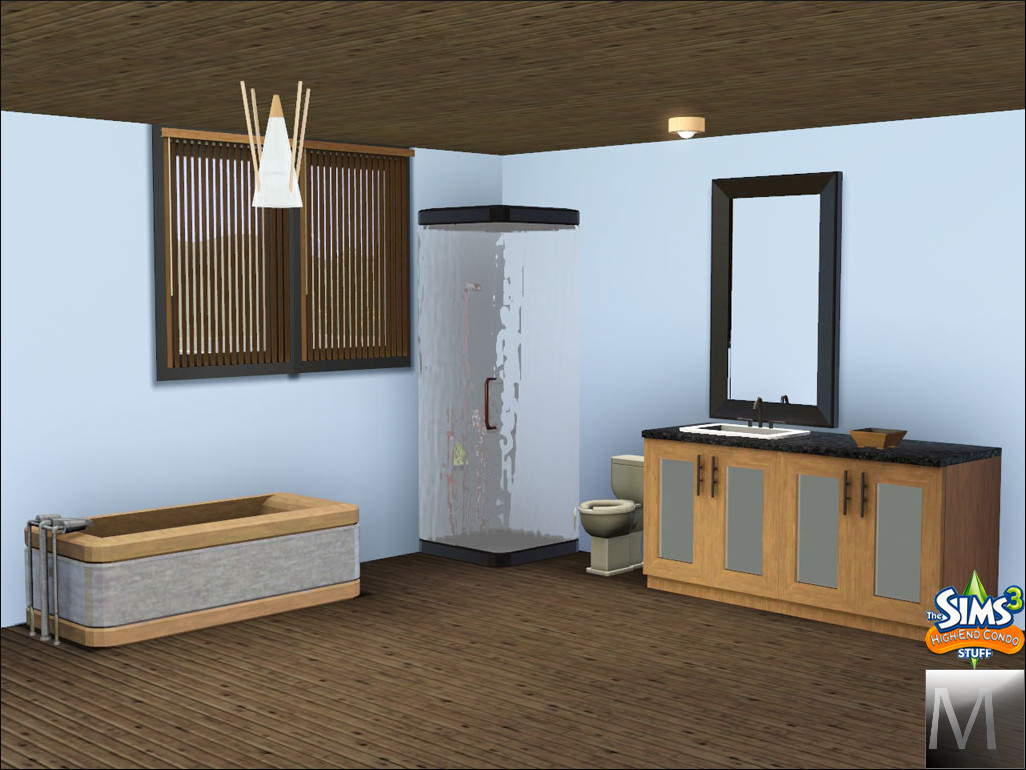 About the Tub
The F. A. Mous Tub was designed for allowing the most comfort one can buy. Sleek styling also enhances any bathroom space.

About the Shower
The F. A. Mous Shower Stall was designed for allowing the most sleek design one can buy. Stylish privacy glass also enhances any bathroom space. 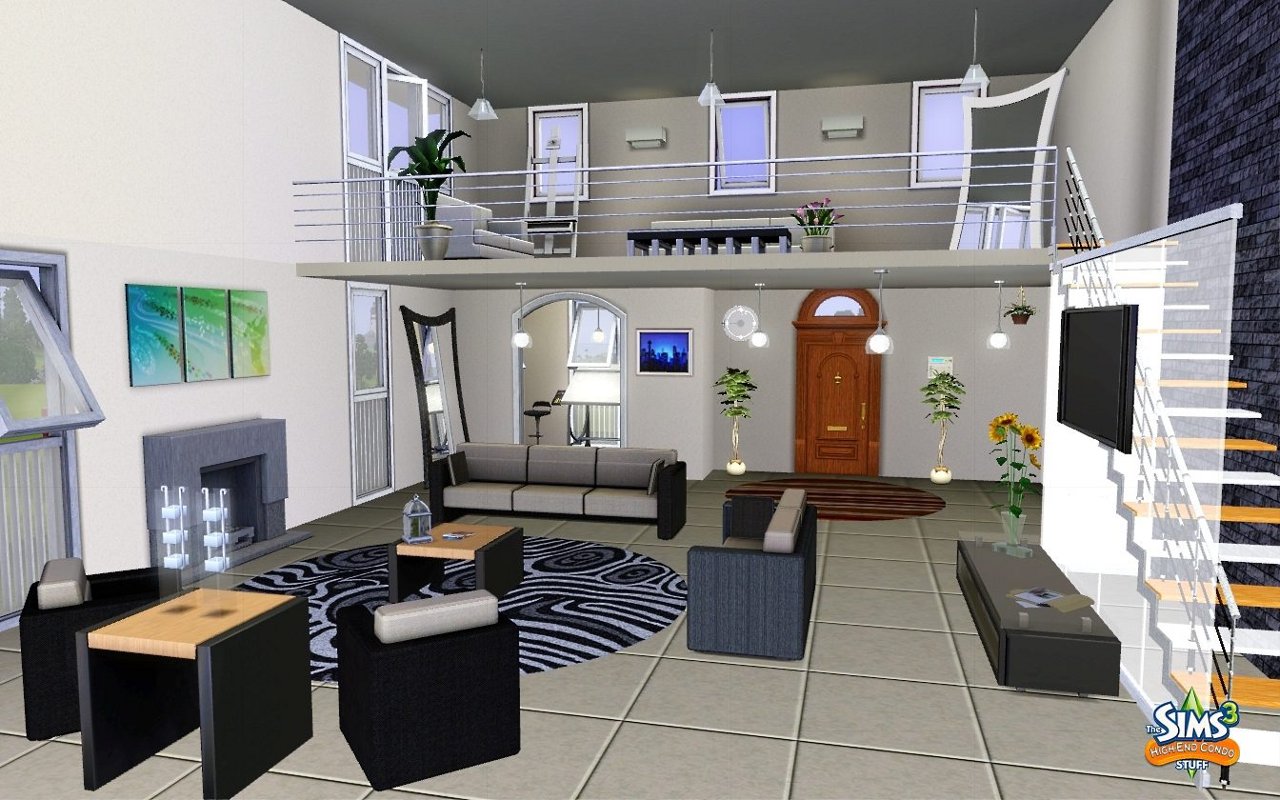 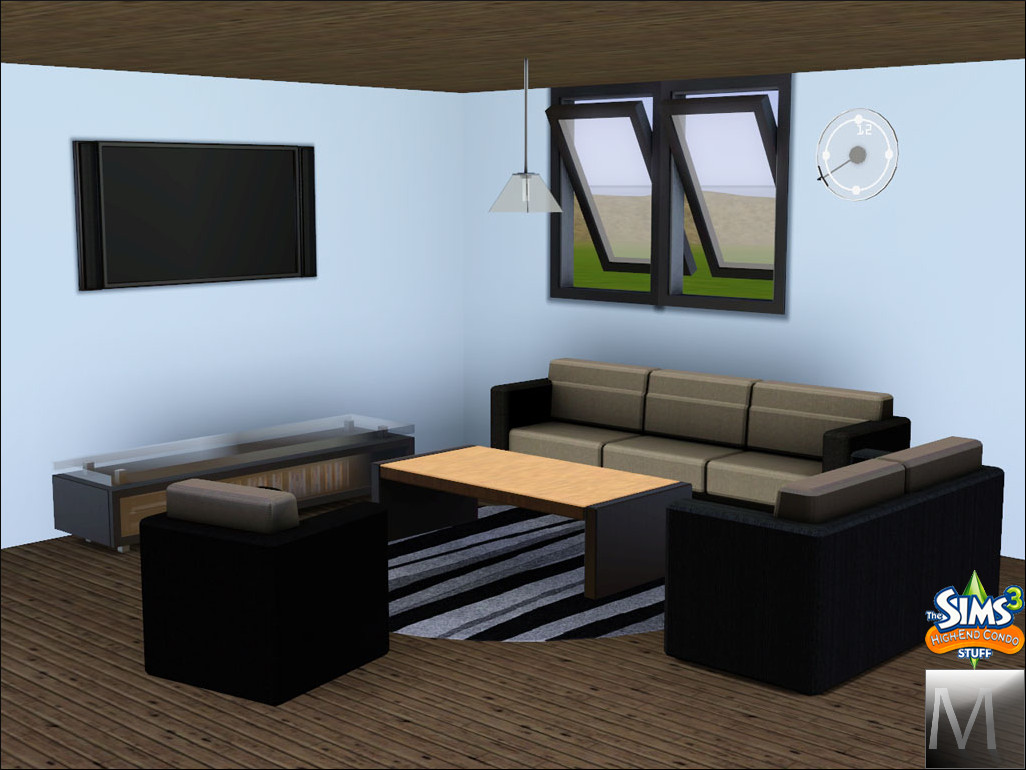 About the Seating
The HighLander Seats are a modern contemporary design based on no specific model, but my minds eye. They are meant to be reminiscent of EA type furniture, in which I believe I succeeded. Including three recolor-able parts, feet being the third, an endless array of pattern options are available.

About the Tables
The HighLander Coffee Tables and End Table are perfectly suited to the clean lines of the seats. Including similar recolor-able areas, a perfect match can be struck every time! 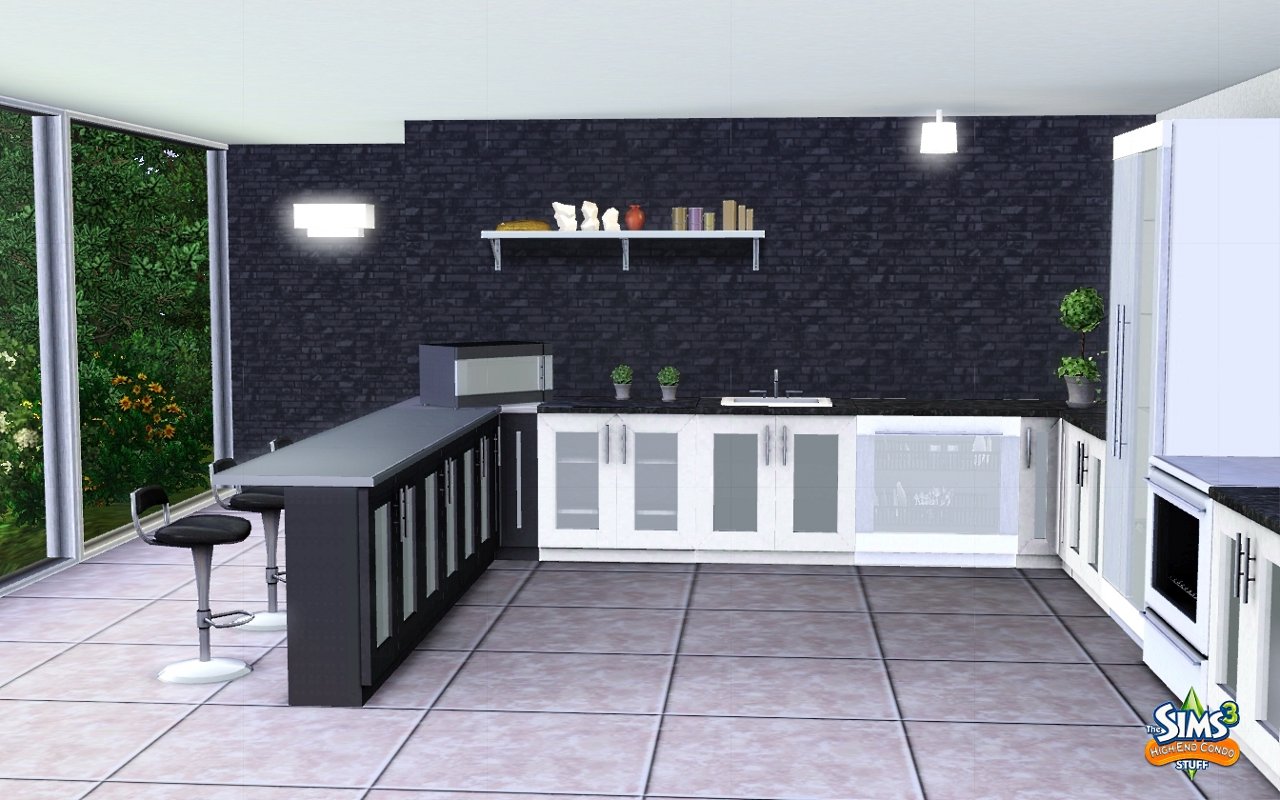 About the Objects In General
The Barracuda kitchen started out as a separate set that was later combined into this stuff pack. A compliment set was also created at the same time, Ocean Dining Set. As such they share, now sub-set, names.
Note: The counters are in .sims3pack form and MUST be installed via the launcher. Simply dropping them into the Mods folder will NOT install them.

About the Stove
The original stove in this set, named Barracuda Stove, was custom match to the counters. Resembling the washer some. Unfortunately, it suffered an incident and had to be replaced with a more compatible model. This model happened to be the High Plain Stove. Featuring Flat Top and LearnEZ technology, this stove is sure to beat out any opponents. Which by happenstance included the Barracuda Stove.

About the Counters and Islands
The Barracuda Counter and Island were created with a goal in mind. Stylish looks that flow well. Unlike tragic EA counters and islands that don't like each other, the Barracuda Counter and Island love to be next to each other. Create the perfect kitchen knowing your designs aren't going to be mucked up by petty object disagreements.
Note: The counters are in .sims3pack form and MUST be installed via the launcher. Simply dropping them into the Mods folder will NOT install them.

About the Refrigerator
The Barracuda Sub-Zero Refrigerator is a pioneer in its field including No-Loss Glass panes. View inside without loosing precious cool air.

About the Microwave
The Ocean's Sun Room is aptly named as when it functions it's as if the Sun itself is inside. Kicking out a whopping 32,000 watts, cooking is a breeze if not down right scary!

About the Sink
The Ocean's Basin Sink is a beautiful under mount sink that looks best in any pattern including matching the counter tops! 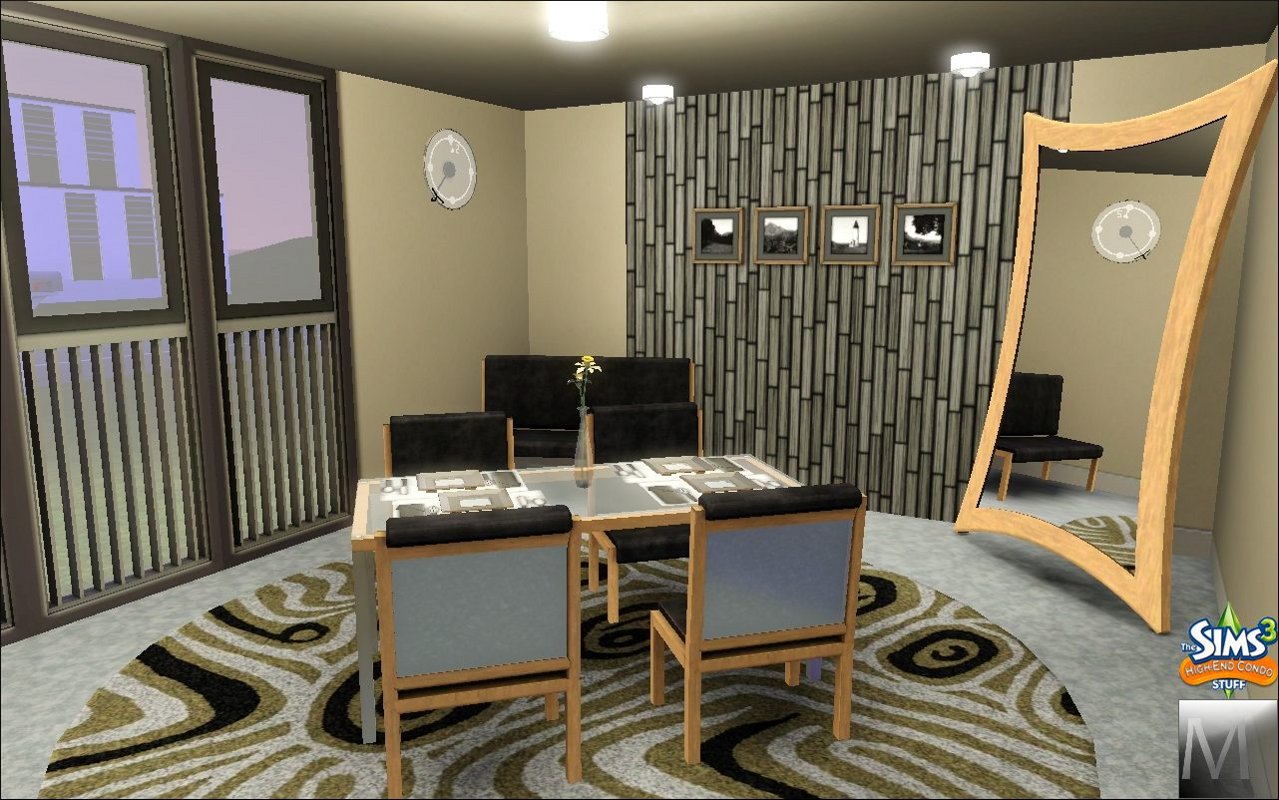 About the Objects In General
The Ocean Dining Set started out as a separate set that was later combined into this stuff pack. A compliment set was also created at the same time, Barracuda Kitchen Set. As such they share, now sub-set, names.

About the Chair
The Ocean Ledge is a creative new seat combing simple lines, comfy cushions and glossy glass. Relax in one today after that big family meal.

About the Bench
The Super Ocean Ledge is a creative new seat combing simple lines, comfy cushions and glossy glass. Relax in one today after that big family meal. 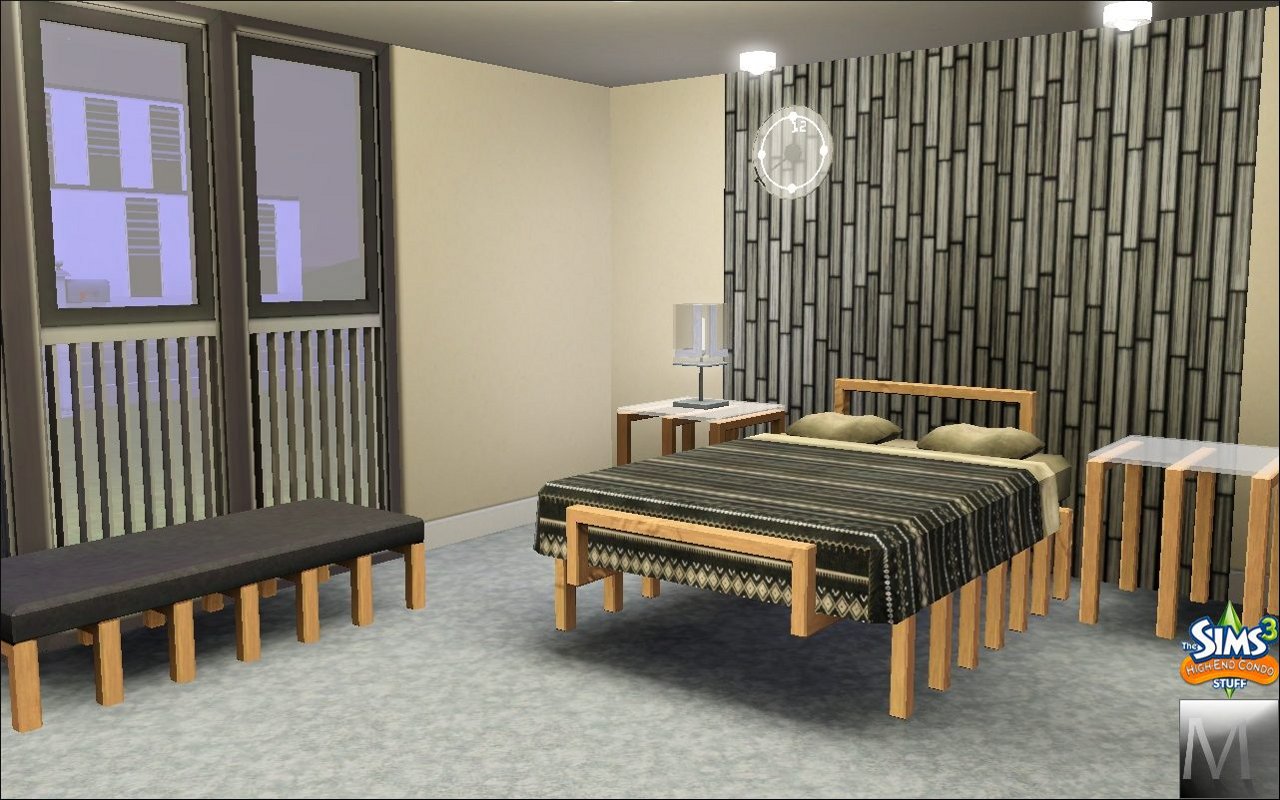 About the Bed
Jerry's Bed is an exact replica of the late Rev. Dr. Jerry L. Aerobedsinslich the IV's bed. Jerry had an odd affinity for multi-legged things. Since he was an entomologist, he fashioned his bed after a centipede. Luckily for you, this bed is neither disgusting nor poisonous.

About the Bench
Crafted to be an exact replica of the late Rev. Dr. Jerry L. Aerobedsinslich the IV's bed matching bench, enjoy supported comfort like never before. 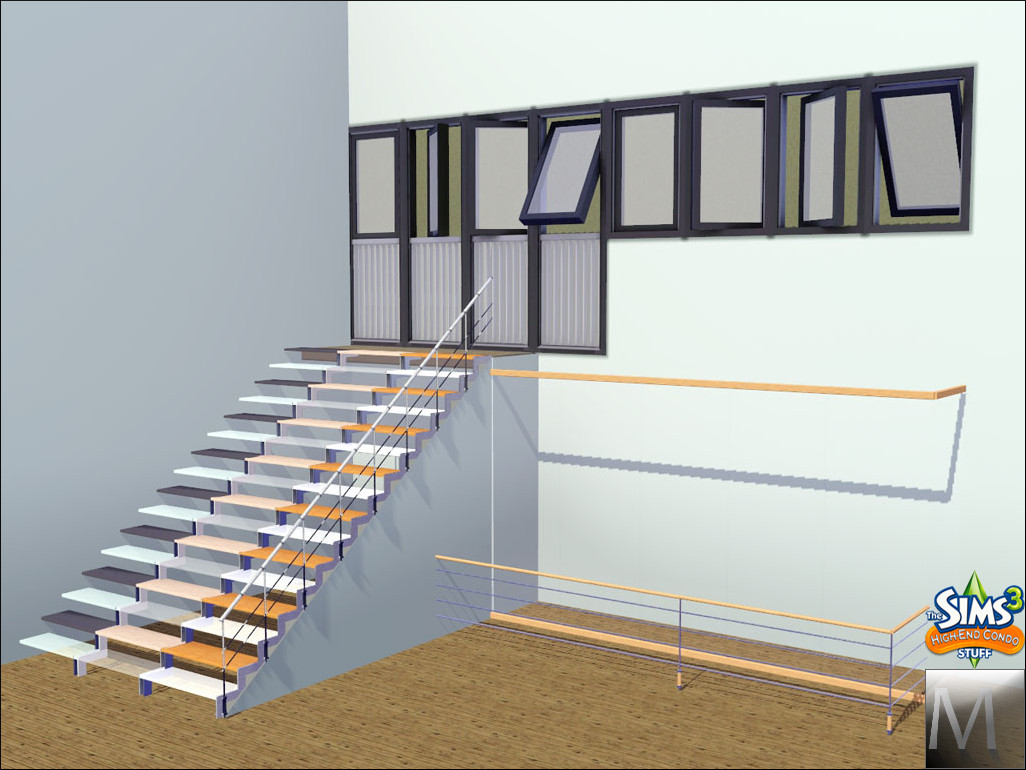 About the Windows
The Condoesque windows were strategically designed to bring in light in mid to high rise buildings while keeping security a priority on low rise buildings. Don't sacrifice comfort or looks with these, get both!

About the Starirs
The UltaMo stairs are the pinnacle of advanced design technology. The official classification is Ultra Modern, but that wasn't far enough. So after taking a couple letters out and pesky spaces, UltaMo was born. NjyUltaMo!

About the Fence
More specifically the Glassy Glass Glass Wall-Like Partition Fence, this advanced piece of material is for those who love glass. More importantly those who love customizable glass. Recent research in glassware has allowed the ability to create a hefty throng of colors and shades. 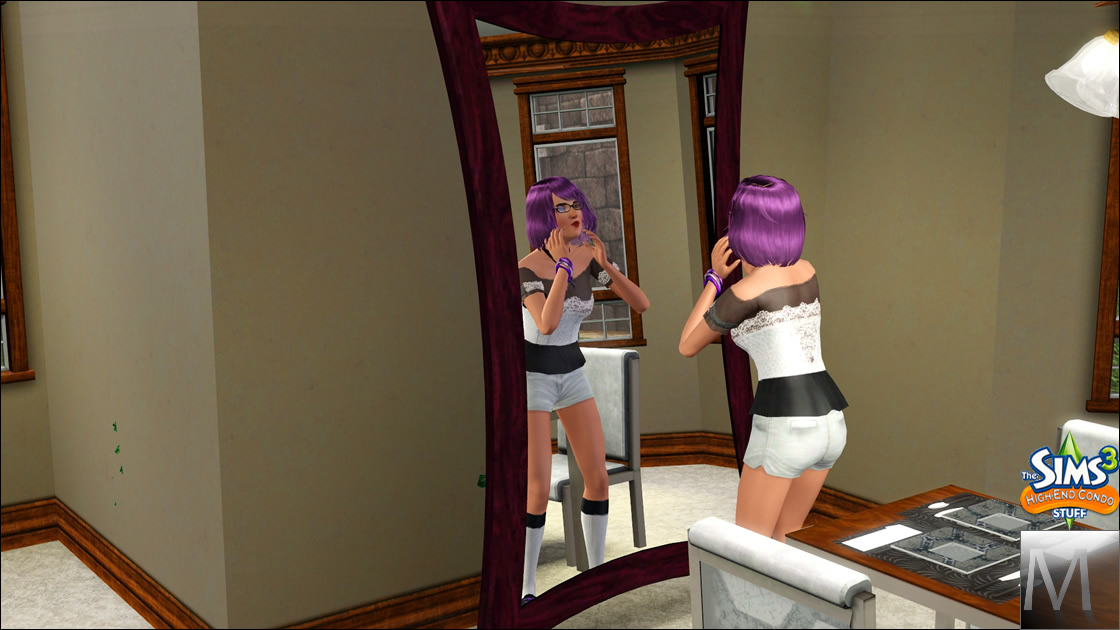 This stuff is amazing, thanks so much :D
zymish
Lab Assistant
THANKS POST

I LOVE this whole set, especially because it's free and much better than EA's stupid stuff packs...THANKS!!!!!! :D
Snugglypoo4
Field Researcher
THANKS POST
#12

I'm speechless. This is just fantastic! Thank you so much for all your hard work and your generosity! :D
CleoSombra
Field Researcher
THANKS POST
#13

What a gorgeous set... I already have an apartment in mind for it all

edit - getting a 404 page for the download, will try again later.
edit 2 - Yay! Downloading

I've been waiting for this! But I keep getting a 404 page when I try to download...

You should work for ea! This is awesome

The kitchen set is lovely.
toxicorange
Test Subject
THANKS POST
#19

...Wow! I love it all, especially the bathroom! Thank you! :D
Morphead

This collection is so beautiful! The effort you put into this is commendable!

I was just bemoaning the state of downloads the other day because it seemed like people were only interested in making pose packs any more, but you more than made up for it. Congratulations, you've managed to out-do EA's last couple of installments! This puts them to shame. Excellent work, would download again.
Melba 1496
Lab Assistant
THANKS POST
#24

WOW!!! Don't know what else to say except THANK YOU!!!
IAmTheRad
Lab Assistant
THANKS POST

Wow! A nice collection of stuff. Better than EA's stuff packs (mostly because it's free)