by Hekate999 Posted 17th Aug 2010 at 9:48 AM - Updated 21st Aug 2010 at 12:48 AM by Hekate999 : Added new link, info and image.
74 Comments / replies (Who?) - 25 Feedback Posts
This is a new mesh, and means that it's a brand new self contained object that usually does not require a specific Expansion pack (although this is possible depending on the type). It may have Recolours hosted on MTS - check below the description for more information.
Picked Upload! This is a picked upload! It showcases some of the best talent and creativity available on MTS and in the community.

I made some changes in the objects:

-Resize of the objects, now you can use them with foundations. The original idea is by "Whoden" , this is the post with his comment about this change ( Whoden Comment ). I liked his idea and i did it, I think now the objects are more usables. 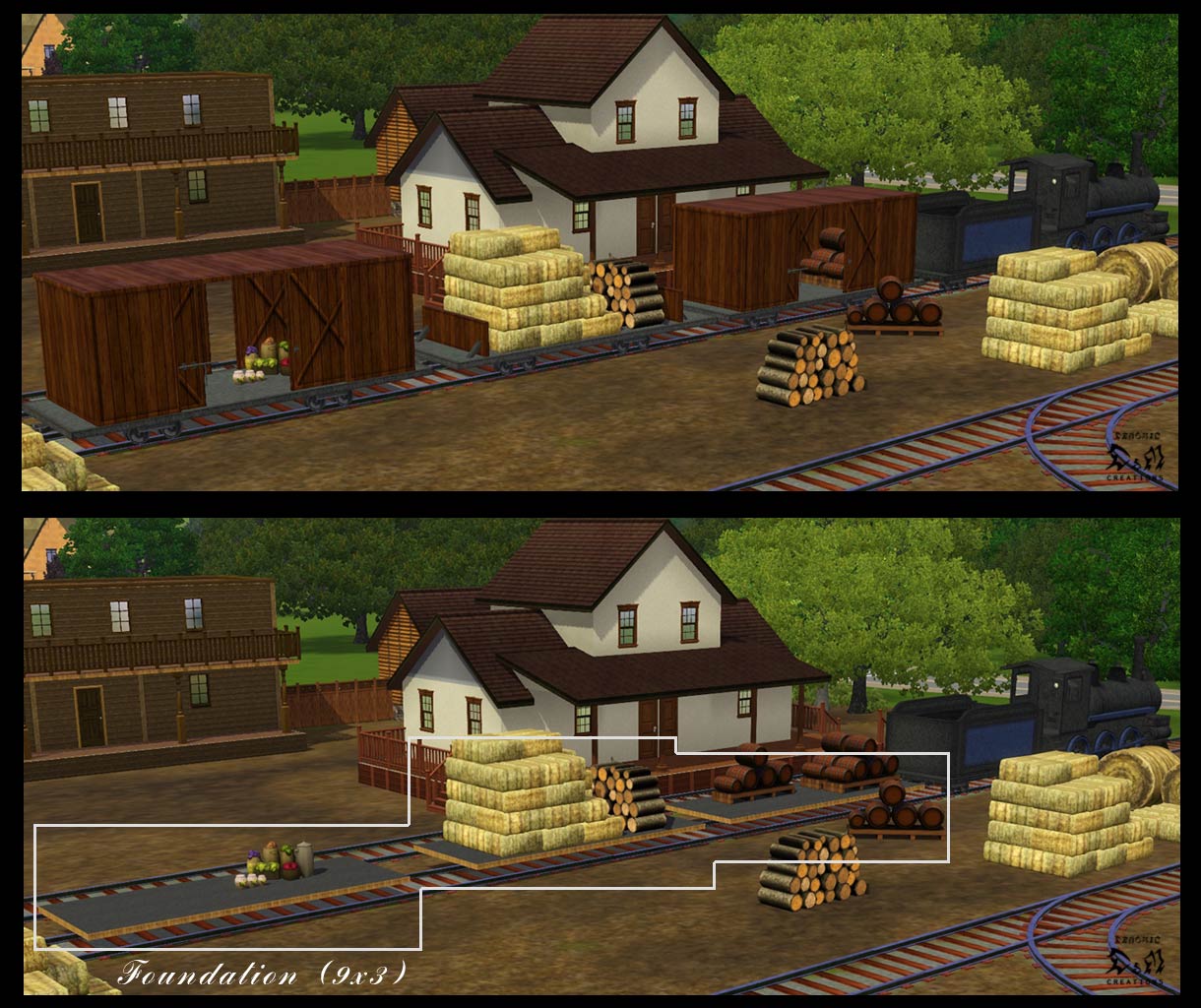 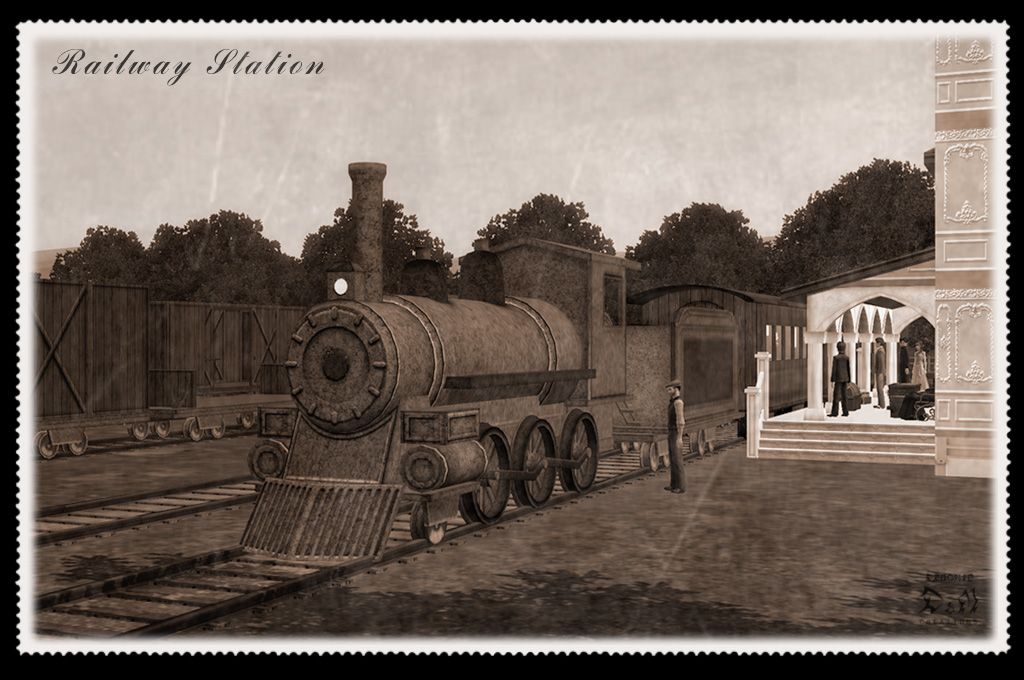 I present this new decorative set . I think this set looks nice for storytelling... victorian or far west worlds, for example. 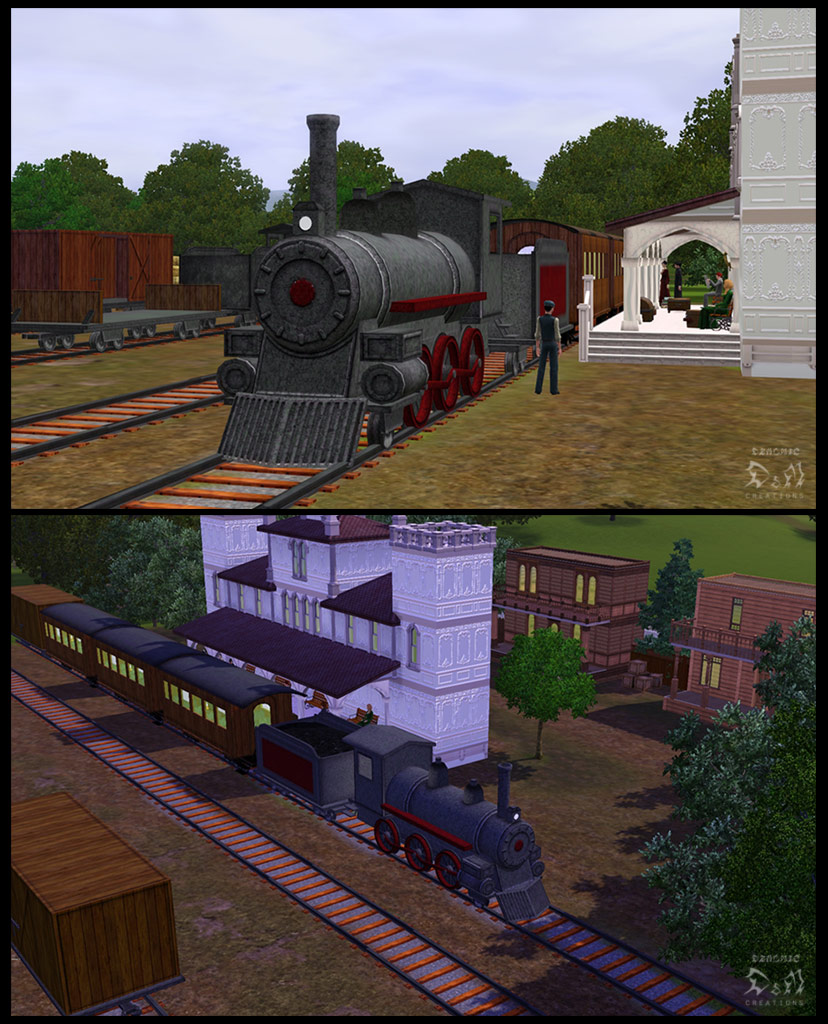 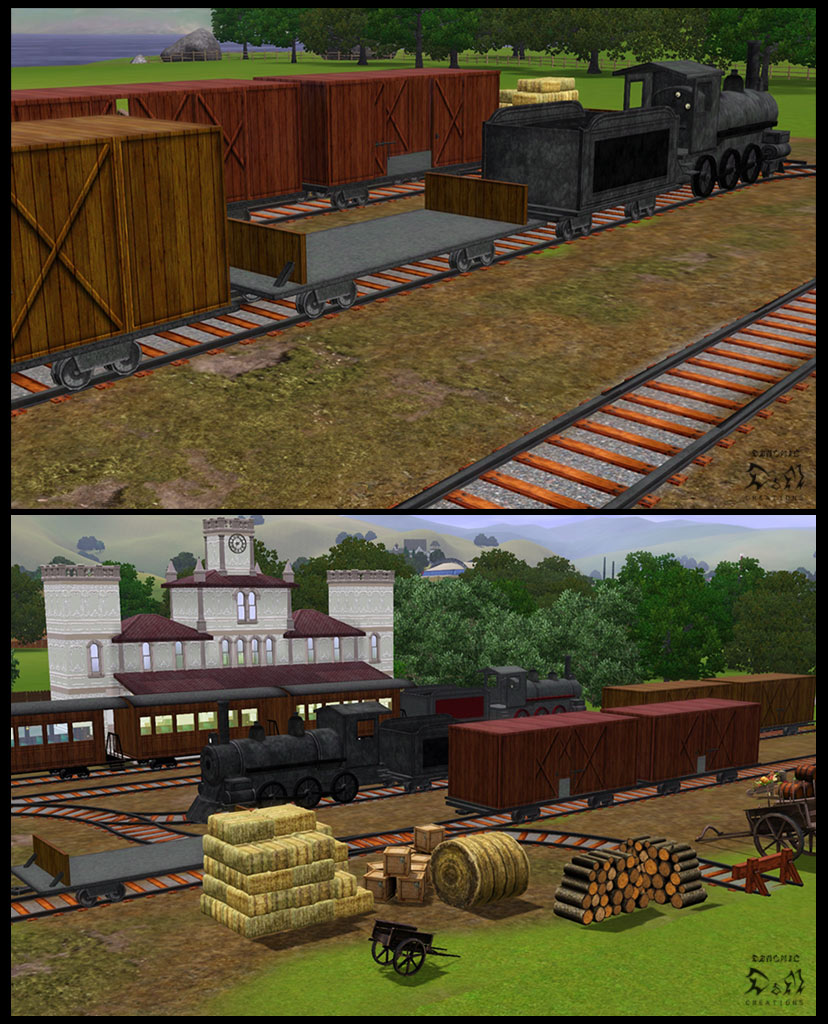 This set include 9 new decorative objects:

Use the cheat "moveobjects on" to put locomotive, tender and wagons on the rails.

Polygon Counts in the link D&M_Railway_Station:

Thanks to Whoden by the idea of changing the size of the wagons for the foundations.
Tags: #locomotive, #wagon, #train, #steam

If you need more info, see:
Back to download view
74 Comments / Replies (Who?) - 55 Feedback Posts, 16 Thanks Posts
Hide Thanks Posts for this thread (Show only feedback)
Page 2 of 3
Hekate999

Thanks for your wonderful comments.

My other creations in my blog D&M Creations - Demonic: http://dymcreations-demonic.blogspot.com/
nanisim

I can only react to this opening my mouth with an enormous WOW! Gracias, Hekate!
jje1000
Mad Poster

Just what we all needed. Thanks!
Simmiller

OMG! So much work! Excellent and awesome and amazing and Whoa you're talented....etc. etc. ;-)
goyahaslegs

This is stunning! It looks amazing, such beautiful work. Thank you!
whoden

I don't suppose you'd consider resizing the meshes so that the floor of the train cars are slightly lower and the length is a bit longer, so that foundation height flooring doesn't show through? I realize the pictures are a little dark, but I think my point is clear.
Human beings are a very irrational species. Some of them are even afraid of pickles.
jje1000
Mad Poster

Woot! I wonder why EA never decided to provide us with all this

Woah this is crazy awesome!!

you must have spent an absolute age making these! They're beautiful :D
It's ok, we all laugh-snort occasionally!
Check out some of my other stuff here.

OH.MY.GOD. There are no words to explain my awe at this. Keep on creating, it's people like you who keep these sites going.
Also, could you upload the lot where you took the screenshots? It's really cute.
cinzanodesigns

Wow... totally unbelievably beautiful. There isnt enough complimentary words in the world I could thank you with.

This is amazing!! Huge thanks!!! :D
Check out my tutorials: For TS4: Eyelashes and for TS2: Eyes and Eyes 2
-My Insta-

Got The Lot?
I love it! LOVE IT! I don't suppose you have uploaded that beautiful lot you used to model it

This is spectacular! Thank you so much for sharing your hard work - this deserves an award!
Guardgian

Stunning work ! Wow I so love this train... Thank you so much for sharing

*falls over and dies* Really have no words. *sob* Hobo sims can even live in them!! Now I can make a terrifically grungy train depo in Twinbrooks!

So, I was really excited to see these in game and make a lot with trains on them. I downloaded in a heartbeat, and opened my game, ready to make my train station only to find one, large, unavoidable problem with your meshes. They don't line up the to footprints! This creates a problem for trying to delete your objects if placed incorrectly. It isn't as bad with the actual train pieces, but an awful experience trying to delete the railroad tracks. I noticed that you used TSRw, that means that fixing the footprints are as easy as clicking a button or two.

I think what you tried doing was make the trains place-able on the tracks without cheats, but it wasn't successful. But jump ahead to the finished project and you have your instructions for placement to use the "MoveObjects" cheat anyway. Having the mesh hang off the footprint is useless and an extra hassle now. To the point though, do you have plans on fixing the boxcars and making the footprint of the tracks larger? It would help out a lot

In other news, the meshes themselves look gorgeous!
View the lovely lots of the "Groundwork" foundation challenge here!
Now streaming on at Twitch.tv/SeveralNerds or UglyHoesConnect.com - whichever is easier for you to type in your browser.
Hekate999

Thanks again for all the comments.

Whoden: I liked your idea and I'm working on it.
Qbuilderz: I'm going to fix the footprints of the train. I don't use TSRW.

I'll add a new link with the changes as soon i can.

Auschick4 and Jelloeggboy: Sorry , I don't upload lots.
My other creations in my blog D&M Creations - Demonic: http://dymcreations-demonic.blogspot.com/
QBUILDERZ

Oh sorry! I swore I read a thanks to TSRw in your post

Well, I am glad you're going to fix them

Will be checking back soon!
View the lovely lots of the "Groundwork" foundation challenge here!
Now streaming on at Twitch.tv/SeveralNerds or UglyHoesConnect.com - whichever is easier for you to type in your browser.
coffeebreak
Lab Assistant
#47

It's incredibly useful to have the tracks and trains offset. I bulldozed the small junkyard in Twinbrooks and put the largest lot I could in there which wouldn't make the world train tracks go kaplooey. But I still wanted to connect the tracks on my lot to the train tracks in the World, so I put the second to absolute smallest lot right up in the gap where the World broken tracks are and in World Editor (not on the lot) covered the hole with swamp grass.

Because the tracks are offset, I was able to hang them off the lot and the missing gap between your tracks and neighborhood tracks is seriously not noticable even when a sim is visiting any of the lots. Then I put another little lot right behind the first one. Mature plants, a scary tree and a couple tracks are going on one little lot (so the hobos can have food when they fall off the train), and a bloody mattress, hammock, egyptian toilet and more tracks are going on the other (so the hobos can sleep). The tracks all turn perfectly into the train barn, which I'm building now. Debugbuy is giving me steam traps to stick under the train -- AWESOME. I'd post pic but it ain't done yet.

Anyway, offset is GREAT!! Even more offset would give me even more options. Btw:

*Dear God/Santa/My Fairy Godmother, I could really use a ton more train related items* Like a big ole whomping oil barrel turned sideways, on stilts. Or a big ole tank of some sort, for flammable fuel storage. Gears to stick on the wall, pipes in odd places, etc etc. Don't mind me, I have greedy downloader's disease and don't have nearly enough steampunk...
whoden

The 1st thing I thought of when I saw these was to make a house with them. So, thanks for taking my idea seriously.
Human beings are a very irrational species. Some of them are even afraid of pickles.
ThatScaryChick

Omg, this is a beautiful set. Thank you!
QBUILDERZ

/runs off to make a house
View the lovely lots of the "Groundwork" foundation challenge here!
Now streaming on at Twitch.tv/SeveralNerds or UglyHoesConnect.com - whichever is easier for you to type in your browser.