I found some excellent new hi-quality pictures of Keira and after doing some fiddling around with the old version of this sim I couldn't resist remaking her. I consider this new version far superior to the old one - her face has much more realistic texture now, the shape of the jaw is closer to the real Keira's, not to mention that I finally succeeded in duplicating her mouth & lips (at least to some degree). 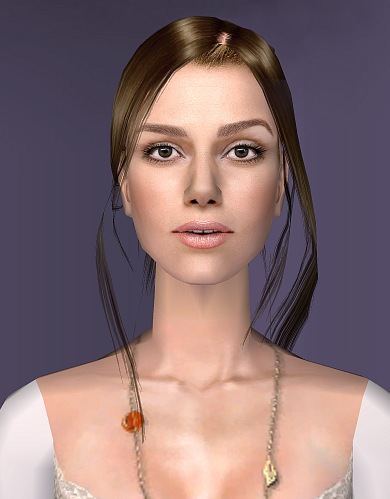 Please ignore the old version of this sim that can be seen in the screenshots showcasing the two outfits - this new downloadable Keira is the one with the violet background and the old sim is.. well, no more. Please do me a favour and delete the old version from your hard drive and install this brand new one.

Keira comes with two looks: first we have her red carpet ensemble from the Oscars 2006 and the second, the gold one, is a recreation of the slinky Gucci dress she wore to the premiere of the second Pirates of the Caribbean film. Included with the sim is the Oscar gear - if you want to have the gold dress and eyeshadow in your game please download the flavour pack.

Ren made the base skintone which I mutilated. Keira's face appears on female sims aged from toddler to elder.

Both dresses were skinned by me. The mesh for the burgundy gown is by RoseSims2 and can be found right HERE, it's the one on the right. The gold Gucci dress requires Nightlife.

The hairline mask was made by Donna at EyeCandy forum. She's also the creator of the Pirates... premiere hairdo - it's called aNipTuckJhair and I suggest you go to the forum and request Tuulia to upload it. I'm unsure of Donna's policy corcerning her more complex creations so I dare not upload the hair here.

Necklace, eyes, lipstick, lashes and both eyeshadows by moi. Necklace requires mesh by SimChic. Blush is by Hairfish at Mermaid Cove. The eyebrows are attached to the skin.

Back to download view
122 Comments / Replies (Who?) - 114 Feedback Posts, 1 Thanks Posts
Hide Thanks Posts for this thread (Show only feedback)
Page 1 of 5
Makai

She is lovely. Very good job

Thank you for sharing,

"If you don't live for something...You'll die for nothing.."
Dream

Great Work! Thanks for sharing

YOu did an amzing work! Thanx
Here are all of my works
Don't upload my Sims on the exchange!
I don't take requests.
Shewaplayer

wow gorgeous :D, shame about the other hair - its beautiful
98% of teenagers do or has tried smoking pot. If you're one of the 2% who hasn't copy & paste this in your siggy.

Pass the ribbon around if you know someone that survived, died, or is living with cancer.
(())
//\\
::Rihanna::

;o shes beautiful 5 stars if i redo my mischa i hope she looks as good as this ;]
stb26

Wow! This is amazing. She looks very realistic. Thanks!
Erinkittycat
Test Subject
#8

WOAH!!!!!!! this is the only sim I've seen that actually looks like the person! WOAH! Extremely realistic!
Brad2006

The second hair recolor is from the eyecandy forum, not sure which thread but I downloaded it there ages ago. And yup it is a maxis mesh.
Here's the link
Nymphy

Oh, you did a great job, she looks fantastic! Thanks a lot !
martyk

She looks exactly like her. The best sim of her I've ever seen! Amazing job

Oh, my! You did an interesting job on her!
In my opinion, Keira Kneightley is one of the most beautiful women, and so is your sim. She looks really amazing! Thanks for sharing her.
ANGEL D.

Oh my! She's absolutely great! Perfect job! I just love keira and can never have too many keira sims!
Could someone please help me find the second hair thanks
(\__/)
(='.'=)This is Bunny. I wanna help him to gain world
(")_(")domination! Copy and paste him into your signature to help him too!!
unskilled_operator
Instructor
DELETED POST
24th Sep 2006 at 6:36 PM

This message has been deleted by unskilled_operator. Reason: Double posted
Rammstein_6891

Great job! By far the best version of her that I've ever seen.

"I always wanted to fly in strange machines"
nikki-isabel

OH WOW!!!! It's one of the best sims I've ever seen!!! You're talented!! This is amazing, amazing job!
LeFox

I'm shocked this isn't a featured download. o_o The sim looks exactly like her! Five stars, all around.
ClaireRat
Test Subject
#22

Looks exactly like her, even down to that weird open mouth and yet it's not even a smile thing. Why does she do that? Anyway, excellent job!
ClaireRat
http://www.freewebs.com/clairecwigley
raymundo
Test Subject
#23

"Absolutly pretty" but impossible to find and load the second hair !!! So, good bye everybody.

The additional joke is that the sim is more nice than the original model !!
Zack16
Lab Assistant

wow great sim! looks just like her, great jkob with the dresses aswell~ about the hair, yes it is from eyecandys forum, but it was hacked a couple of days ago, and a lot of the threads were deleted and lost, so the hair cannot be downloaded again...
-z-a-c-k- -s-i-m-s-
chatnoir

These recolours may or may not be endorsed by bruno.