The Parthenon - 2 Versions (Ruined and Intact!)

Picked Upload! This is a picked upload! It showcases some of the best talent and creativity available on MTS and in the community.
Phaenoh’s Simspiration Studios Proudly Presents: 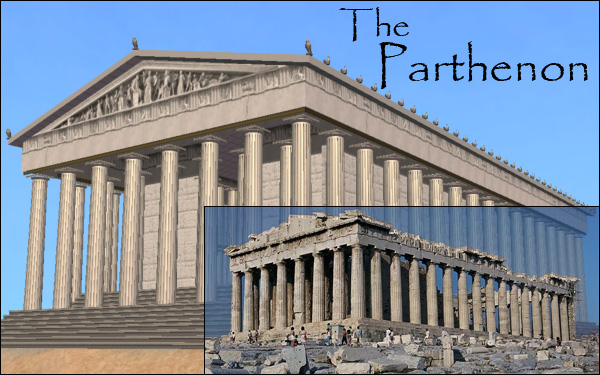 Lot Size: 5x3 and 5x3
Furnished: sparsely and no
Played/Tested: no and no

My contest entry is finally ready for the world to have, after 2 and a half long weeks. At first I wasn’t going to enter, but then I remembered a book I had from school. This book had a lot of pictures of old buildings, and then the Parthenon jumped out at me. I knew I had to do it.

For those who don’t know (one of my younger fans had never heard of it!), the Parthenon is in Athens, Greece. It is a temple to the Greek goddess Athena. She is the goddess of wisdom. Construction began in 447 B.C.E. and was completed nine years later, the last of the sculptures being set place in 432 B.C.E. To learn more about it, read through this website. I used it extensively for reference pictures.

I’m presenting you with two versions of the Parthenon, one as it would have been after all the pretty colorful paint chipped off (red, blue, and green Parthenon seemed strange to me) and a modern day version showing the current destruction of it. (I didn’t just delete random stuff, I referenced the pictures to figure out what to take away.) 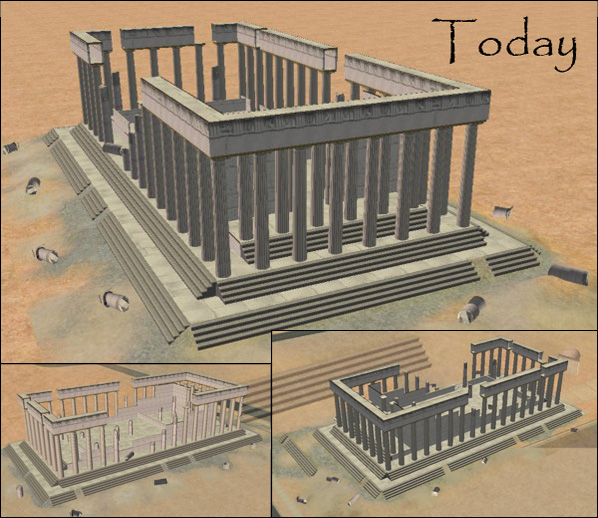 The pediments and entablatures were created using actual images take from photographs of the Parthenon. The statue and columns were meshed using actual images as reference. The statue hasn’t exited for many centuries so there are many different variations of it. The roof decorations are only similar to the actual one. One each corner there was a larger statue and running lengthwise in between each row of tiles was an end row decoration. The actual image reminded me of a front on view of a peacock, so it became a chicken somehow. The roof was made of marble tiles sliced so thin they became translucent. It has a really pretty effect and can be seen on a library at Harvard I believe. Ok, now I'm off topic. The complete Parthenon is sparsely furnished with the Statue in the East cella, a table-alter in the West cella and standing candles in every corner. 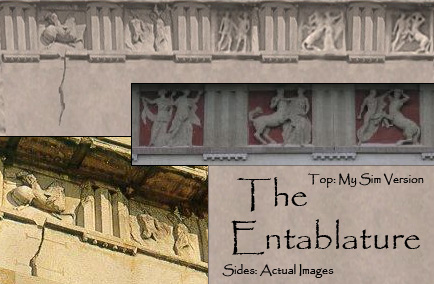 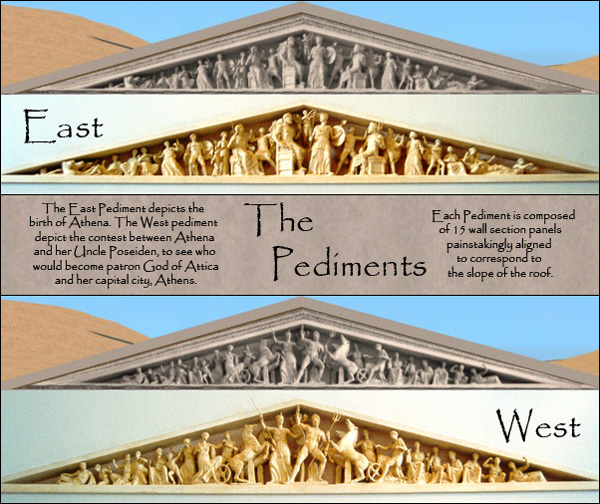 My First Time:
Making Walls, Making Floors, Using constrainFloorElevation cheat, Using IndividualRoofSlope cheat, Recoloring an object, Using Milkshape, Editing a mesh, Creating a new mesh by combining other meshes, Making a UV map, Using Clean Installer (I did it right, don’t worry), and Uploading a lot! (Hopefully, this is a 'Sim'spiration to my fellow noobs ;-) )

Previous Knowledge:
PHOTOSHOP (thank god), and some 3D experience with 3DStudioVis in high school and FormZ last year in college (only helpful because I understood how some modeling tools work).

Compatability: I have all the expansion packs up to Seasons. You need them too if you want this. Housing and lots are snobbish, they don't like downgrading

Nitty-gritty: Please don’t upload any of my creations anywhere, they are my toys to share, but I want to be the one to share them. If you use them in a lot you upload, please link back to me instead of including it. Also, please don’t clone/recolor the column meshes I’ve made for this, as they aren’t perfect enough yet and I plan on doing more work to them. I’ll eventually make a version that is good enough, in my eyes, to be worthy of recoloring. (Better mesh, enabled slave objects, hey it my first time for ALOT of things, cut me some slack, go drool over that Athena statue, which was my VERY FIRST MESH EVER). Anyways, write me a note and hit the thanks button?

FYI: For those interested in the process of creating this project, my journal entries numbers 2-8 detail the process, in a rather light and somewhat humorous manner. Read the story here.

I know this lot isn't the most 'usable', but with BV coming out, it could suddenly become a very good thing to have. ;-) Leave me a note, thanks!


Additional Credits:
Photoshop, SimPE, Numenor (for inadvertently teaching me the basics of SimPE over the last month and a half), Niol and many others for answering my all my enlightened-noob questions in the Modding Discussion thread, ALL of the tutorial writes (I’ve read almost 75% of them by now, whether they were related or not), my boyfriend for putting up with me being Sim-obsessed this past month, one of my friends for objectively criticizing my statue mesh job by not being afraid that the Goddess would smite him down for calling her fat, and CarmeeKitty, for saying ‘wowwww, that is amaaaaaaaaaaaaaaaaaaaaaazing’ when I showed her the finished pics, and making my feel good about it.
Tags: #Phaenoh, #Parthenon, #Athens, #Greece, #Ancients, #Temple, #Statue, #Real

Back to download view
76 Comments / Replies (Who?) - 69 Feedback Posts, 3 Thanks Posts
Hide Thanks Posts for this thread (Show only feedback)
Page 1 of 4
KellieKellieyme

It's absolutly amazing! Fantstic job hon and thank you so much ;-)
Archnerd

Wow, this is spectacular, thank you!

Please do not upload any of my lots to the exchange, or any other site.
If you would like to see more of my lots click here.

Wow indeed!!! This is so incredible! The wait was definitely worth it!
FBI Agent
Lab Assistant
DELETED POST
21st Aug 2007 at 4:36 AM

This message has been deleted by FBI Agent.
FBI Agent
Lab Assistant
DELETED POST
21st Aug 2007 at 4:39 AM

This message has been deleted by FBI Agent.
FBI Agent

I apologize, Absolutly A-MAZING!!! Thank you so much!
You have the right to remain silent, anything you say can and will be used against you in a court of law!
fway

I Might Not Be Able to Visit the Parthenon with my budget, but I know my sims will! hopefully when i get BV... oh the wonders! sight seeing!!!!!!

this is great thank you!!! :D
﻿
lamammaforever

This is great, really good job! Good luck for the contest. Thank you and ciao.
http://simswalhalla.weebly.com/
http://mysims2graveyard.weebly.com/
wndy26

OMG!!! I am sooo totally IMPRESSED. Awesome work! It is totally fabulous!
CarmeeKitty

Brilliant work, this is amazing (as always), Phaenoh! :-D Now I can say for sure that I know what the Parthenon is. I'm thinking of downloading it so my Sims can visit it.

this is unreal!! Amazing detailing...i'm kind of speechless LOL Fantastic work! Good luck for the contest but i doubt you will need it

Bravo! You did a fantastic work!!!! I'm sure that you will win the contest (if you don't the judges would be unfair). Keep up the good work!!! :D

I can honestly say I've never seen anything like this. It's so detailed! Absolutely gorgeous. :D
There's always money in the banana stand.
Phaenoh

Thank you everyone, all of your nice comments really make creating worthwhile for me. (Makes me feel all warm and fuzzy inside!)
New! Fully Renovated Pleasantview!
Like my work? Help me make a difference!
Rapsheba555

wow, very good job here! :D
"When life gives you lemons, see the lemons, feels the lemons, BE THE LEMONS!"

Well I'm a fan of sims living in strange, reclaimed place (such as a disused swimming pool) so I'll be converting this to a residential and sticking some fantasy sims on it. Great job!
GLachaille

I'm giddy!! Everytime I see a post (in whatever site I am on) about a Greek temple, I get excited and and 9 times out of 10 I get disappointed --- but not this time. You just set the bar really high. This is amazing. I am really glad you braved meshing (I still haven't gotten there yet), because I finally have a truly beautiful Parthenon for my game!!
SexyGirl228

Thank you sooooooo much. This is an awsome place. You did a great job. Keep up the good work.
ieta_cassiopeia
Scholar
#19

It looks absolutely amazing - I wouldn't have believed you were new to designing new meshes if you hadn't said so! Good luck to you in the contest, and congratulations on being declared "Exceptional" by the judges. :D
Phaenoh

Quote:
Thank you, it makes my day to hear you say that.


Quote:
I never would have found out about this unless you said something! I can't believe it! I'm really excited. EEEK! I'm glad I decided to undertake learning to make new walls/floors/meshes. I can see that it was worth it! THANKS EVERYONE!
New! Fully Renovated Pleasantview!
Like my work? Help me make a difference!
twistedchain50
Test Subject
#21

This deserves more than a little award. It's so brilliant you deserve To Become A God!
Phaenoh for God!
this is a god-like genius piece of work
Phaenoh

Quote:
lol, maybe not. I'm just a good copy-artist. Thank you for your kind words though!
New! Fully Renovated Pleasantview!
Like my work? Help me make a difference!
leru

This is UNBELIEVABLE!!! I'm so impressed! Thanks you so much for making it.
My creations at modthesims2
Simooligan

All I can say is, WOW.
www.youtube.com/simooliganstudios