by rebecah Posted 21st Oct 2007 at 6:09 PM - Updated 16th Dec 2008 at 3:39 PM by rebecah
33 Comments / replies (Who?) - 24 Feedback Posts
This is a new mesh, and means that it's a brand new self contained object that usually does not require a specific Expansion pack (although this is possible depending on the type). It may have Recolours hosted on MTS - check below the description for more information.
Picked Upload! This is a picked upload! It showcases some of the best talent and creativity available on MTS and in the community.
Holly1983 requested that the doll house be made to allow adults to play with it.

I don't know why Maxis didn't do this the animations are there for the adults.

Adults, teens, and elders are enabled to play with this house along with toddlers and children. 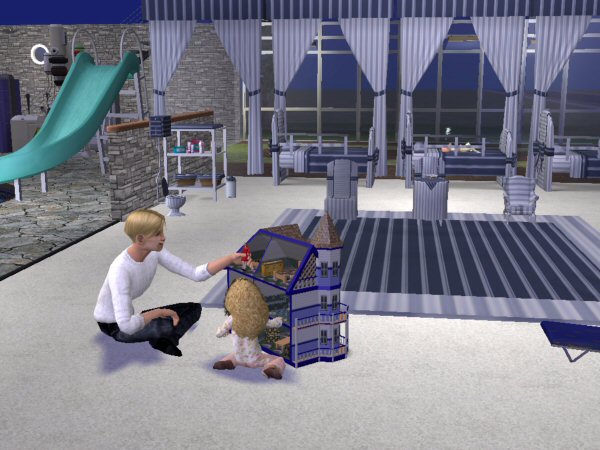 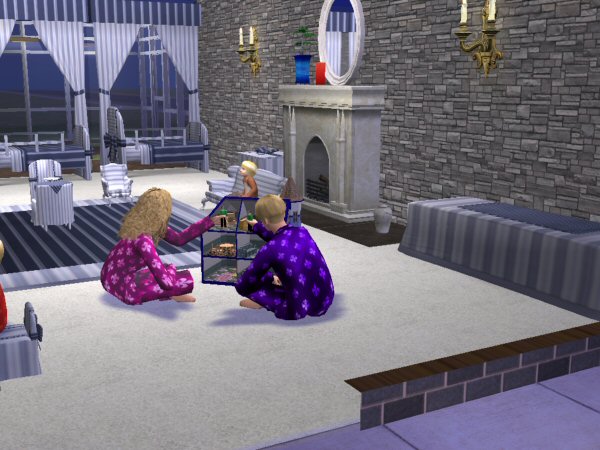 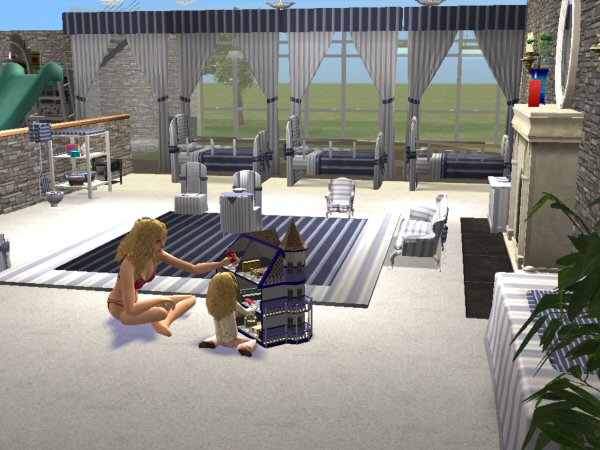 The set in the background is coming soon. I hope to upload parts of it today.

Additional Credits:
Thanks to all that help make this possible.

Especially thanks to the users that click the thanks button and/or leave comments. I try to check for any comments in my posts on a daily basis, and enjoy reading them very much.
Tags: #doll house, #adult toys

I agree about the doll house. I play with my daughter's with her all the time. Thanks.
chicagobearjoeyp
Test Subject
#3

This is a great idea! Thank you.
KagomeKagome

I could have sworn that someone -- Squinge or someone else on here -- made an adult-playable dollhouse (or a mod), way way back around the first or second EP.

If squinge did it he's not on MTS2 and is retired, his would also have been a global hack and some people prefer and object hack as opposed to global hacks. I did search for one on MTS2 and did not find one. I'm only trying to fill a request here.
smithycpl

Great mod Rebecah, thanks very much for your work!

And indeed i didn't see it anywhere yet as a object hack myself.

I can assure you KagomeKagome that object hacks are way different then global hacks to create.
Twice as much work if not more and even somewhat safer to use, so i'm very happy with this.

Be careful about reading health books. You may die of a misprint.
Mark Twain
Starfish of Terror

Oh, wonderful! Thanks so much, this is such a great hack. And indeed, I much prefer object mods to global mods. :]
XxSimsrulexX
Field Researcher
#8

thank you lol
I used to find my mom playing with my doll house all the time when i was little hehe.
Cool hack... Thanks
98% of teenagers do or has tried smoking pot. If you're one of the 2% who hasn't copy & paste this in your siggy.
(()) Pass this ribbon around if you have or know someone with an illness and together, WE CAN
//\\ CONQUER IT!!!
shaunathon6

Thanks, its only fitting that adults be able to play along with their kids while playing.
Squinge did create a mod but he is retired and all his mods are at the Sims Graveyard.
I would rather have this than a global hack.
I cant wait to see the set that is in the photo's its really nice.

I know when I was a toddler, my mom and dad would play with me with my doll house.
Also thanks for making it an object mod, I think that they are safer to use.
You give my sim tots and kids so much more to do, now I'm not just waiting for them to grow up lol...they love MTS2's rebecah, giving them so many toys!
By the way, where can I get that female hair in the picture?
Thanks!
Don't cry because it's over, smile because it happened.
Ambular
Instructor

Thanks so much!! Squinge did have one, but he stopped updating it with OFB and now of course he's retired. I missed it so much! XD
judynu

this is fantastic, amazing, thank you,

Can hardly wait for your other stuff.

You are the best for sharing with us.

Thanks so much for all your kind comments. This was really a very simple mod to do especially since the animations are all ready in the game.

Concerning the hair, I found it one MTS2 and I really love it. It has some flaws for the blond version but not so bad I can't live with it.

This is your version of such an object and I enjoy your work you are sharing!
I'm becoming tired of discussions whether something exists already or not. Who wants to browse the whole internet to discover what already has been done? Does it hurt to have more than one object of the same kind? I'll use the one I like best, that's all.
Thanks again!
hexameter
Sophie-David

Thanks so much for this, rebecah, this is another great item that Pleasure Sims can actually use after they satisfty their want to buy a new toy.

Wonderful! I never understood why Maxis didn't make this adult playable, thanks so much for doing this.

Thank you so much

This is a Fabulous Idea! Adults Should Be Able to Play with Doll Houses! ThankYou rebecah!

Yes, this is a great idea to have adults play with the dollhouse!

Does anyone else find that the adults will only play for a few SimMinutes, though? Even if the "fun" bar is kinda low, I've had three or four adults who'll play just a bit then get up and stand around. The dollhouse is in a couple of houses so I haven't checked how outgoing any but one of my Sims is. She's about middling. I'll have to check.

In any case, rebecah, you have made SimFamilies with toddlers SO much more fun to play!
rebecah
Scholar
DELETED POST
Original Poster
4th Nov 2007 at 7:24 PM

This message has been deleted by rebecah. Reason: double post
rebecah

I've found the sims have to have a playful personality to play very long. I imagine the outgoing may have some to do wiith it but I really think the playfull is more important.

You're very welcome! I'm gald you enjoy them.
jlouis

I'm 30-something and I love Dollhouses!
Thank you so much! I just gave my 2 year old daughter her first dollhouse. I'm so into it, lol! I gave her a plastic one (Calico Critters, which is really fun because there are tons of little animal characters with accessories) because I'm afraid at this age she'd wreck my dollhouse that I've saved since childhood, which is really beautiful hand-made wood and electrified and which my own mother spent a lot of time wallpapering and shingling while I was sleeping, lol! I actually went up to the attic to look at my old dollhouse and started planning some refurbishing so I can give it to my girl when she is around 4 or 5. So adults definitely like playing with dollhouses! Actually, the original dollhouse in the Sims 1 was really a nod to the fact that the Sims game (especially the base game of Sims 1 - anyone remember playing that!) is in essence a dollhouse for one's computer - a dollhouse in a dollhouse... ironic.

I read an article a while back in the New York Times about how children/tweens are so into playing the Sims and touted it as the dollhouse for the new generation of kids. I will definitely have to give my daughter her own copy of the Sims (whatever version will be out by the time she is 8 or 9) since mine is very hacked to probably a NC-17 rating.

It will be fun to play with her, though - she can have her households interact with mine! She has already expressed interest when she has seen the game on my screen - especially when I showed her a household that had a new baby and a toddler and had my self-Sim as well as my mother as a Sim (Grandma!). It was a bit difficult trying to explain that her Sim was now a teenager about to go to college (totally bizarre "conversation" where I found myself saying, "look how pretty you grow up to be!" - mind you, I'm a totally sleep-deprived single mom!)

If I remember correctly, I think the dollhouse in Sims 1 was adult-playable which is probably why they made the animations... why they only allow adults to "kick it" though is beyond me. Kick a dollhouse! How awful! LOL.

I thought adults could already play along. When a child or toddler is playing with the doll house, teens and adults can join. They just can't start playing by their own.
Or at least, that's what I remember, but don't quote me on it.