by szielins Posted 19th Nov 2007 at 5:12 AM
6 Comments / replies (Who?) - 4 Feedback Posts, 2 Thanks Posts
This is a new mesh, and means that it's a brand new self contained object that usually does not require a specific Expansion pack (although this is possible depending on the type). It may have Recolours hosted on MTS - check below the description for more information. 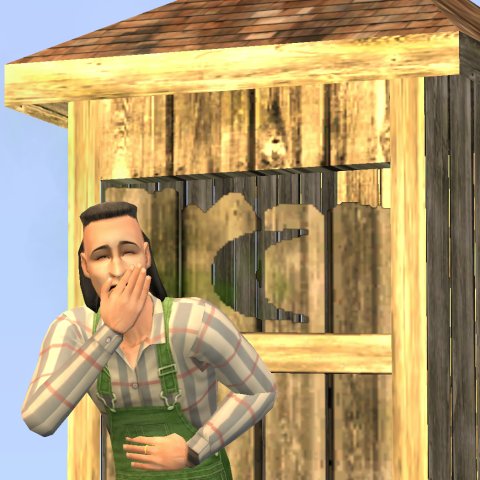 This is a version of Dr. Pixel's "One hole outhouse" from http://www.modthesims2.com/showthread.php?t=257737 , with the following modifications:

(A) It's disagreeable: making use of it does not provide any sort of comfort boost.

(B) It's dirty. The original is so well done, though, I only fiddled this version's look a little bit-- and that only so they could be told apart when standing side by side.

(C) It's dirtying: Sims using it suffer an additional hit to hygiene. 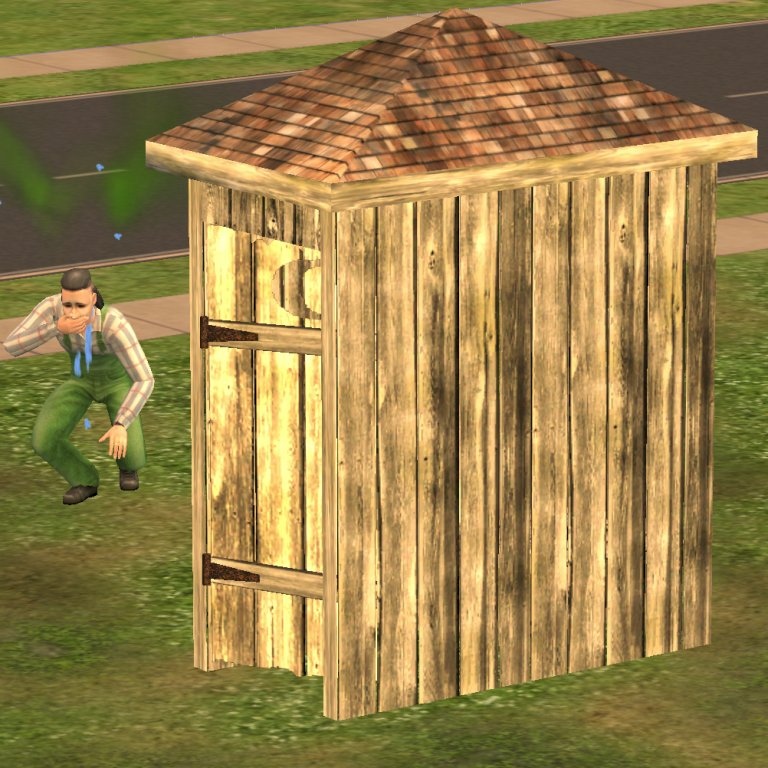 (Don't mind Clancy, there. He's trying to fit in-- bought himself a set of overalls at the mall-- but he's still town. He'll be all right in a minute; he's just never seen where chitterlings come from before.)


Design note: Male or female, standing or sitting, it doesn't matter: the hygiene hit is incurred. I considered having it hit only Sims who sit-- but I figure anyone with access only to such facilities is going to have to spend a significant amount of time sitting eventually (or explode), even if the player is taking care never to let the Sim's bladder motive drop particularly low.

Additional Credits:
Although listed as a "new mesh", this is actually just a slight modification of the original from http://www.modthesims2.com/showthread.php?t=257737 , which was itself cloned from Numenor's toilet stall template at http://www.modthesims2.com/showthread.php?t=172205 . (It is "new" in the sense it has its own set of GUIDs-- it stands alone, and you can install this one without having to install the other-- but I did not create the mesh. Dr. Pixel created both the mesh and the basis for the texture on this one.)
Tags: #Outhouse, #Outdoor Plumbing, #Toilet, #Dr. Pixel

Back to download view
6 Comments / Replies (Who?) - 3 Feedback Posts, 2 Thanks Posts
Hide Thanks Posts for this thread (Show only feedback)
pfish

This is great. Very funny that your sims threw up.

Well, that´s even more realistic... Thanks,

Just wet me an ther missus wuz lookin fer. None of them new fangled indoor plumbings fer us, nosiree!
slar

It's a thing of beauty. Try a gas station bathroom next!
*loved your picture captions*
Zażyj Tiktaki
Test Subject
THANKS POST
#6