by DiamondBullet Posted 30th Dec 2007 at 9:40 PM
13 Comments / replies (Who?) - 10 Feedback Posts, 2 Thanks Posts
Picked Upload! This is a picked upload! It showcases some of the best talent and creativity available on MTS and in the community.
Hugh Michael Jackman is an Australian film, television and stage actor, best known for his role as Wolverine and Gabriel Van Helsing. He's packed with the long messy maxis hair (a recolour made by me) and maxis clothes as well. 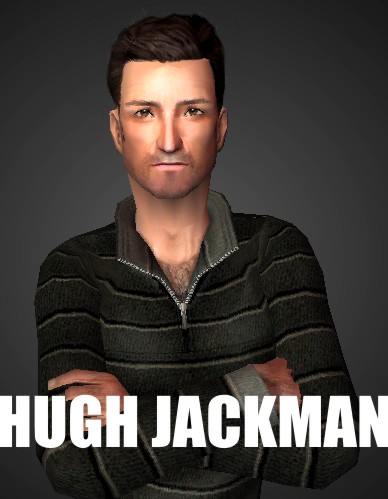 Custom Content NOT INCLUDED
.The casual outfit is from AllAboutStyle (recolour).
.The hair in the 'Red carpet' picture, is from Arcia (Insimenator.net)
.Wolverine's hair, facial hair, claws and outfit (Recolour of funnyycats made by me)

Diamond's Tip >> To make your Wolverine sim, funnyycats 's got an awesome pack, with all that appears in the picture and it's not included (except for the outfit recolour).

Back to download view
13 Comments / Replies (Who?) - 9 Feedback Posts, 2 Thanks Posts
Hide Thanks Posts for this thread (Show only feedback)
DutchXfan

I love this sim and he looks great in the game but your skin disappears in the shower. All that's left is the head. can you fix this?
DiamondBullet
Test Subject

MUCHO SEXY. :]
thanks so much!
jeditl
Test Subject
#10

This message has been deleted by HystericalParoxysm. Reason: Please read the Creator Guidelines.
larsson1970

He is amazing! Thank you

is he an adult or an elder?
alocasia100
Test Subject
THANKS POST
#13

He is absolutely wonderful!!! Thank you!