Update, Feb. 3/08: The attached archive, including the lot itself, have been updated with the latest versions of the Simple Columns. The update enables the columns to be visible from the neighbourhood view in the base game. Since this lot was created in a Nightlife and Seasons environment this update would make no difference since the columns were always visible in this situation. So this update notice is really just for creators who might also be designing for the base game.

Update, Jan. 11/08: The attached archive now contains the latest versions of the rooftop antennas. If you have already downloaded this lot, it may be easier to retrieve the updated files from the antenna thread. 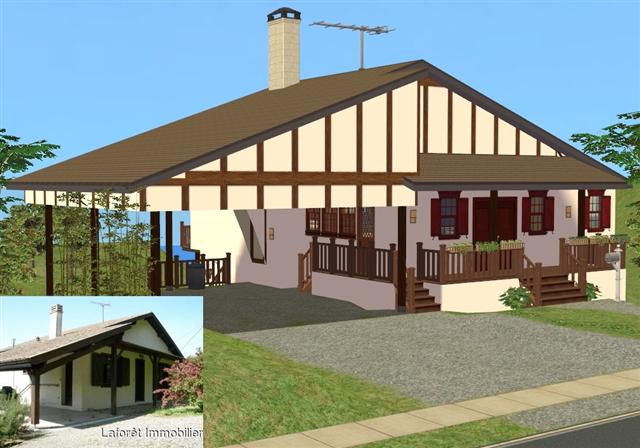 This house is inspired by this real estate listing for a rural house in Béarn, a region of southwestern France. With only one good picture (shown in the inset above) and three other tiny photos at the web site, information on this house was very sketchy, but Mihura was very helpful in guiding me towards what would be characteristic for such a house, and I view this project as very much a collaborative effort between the two of us. 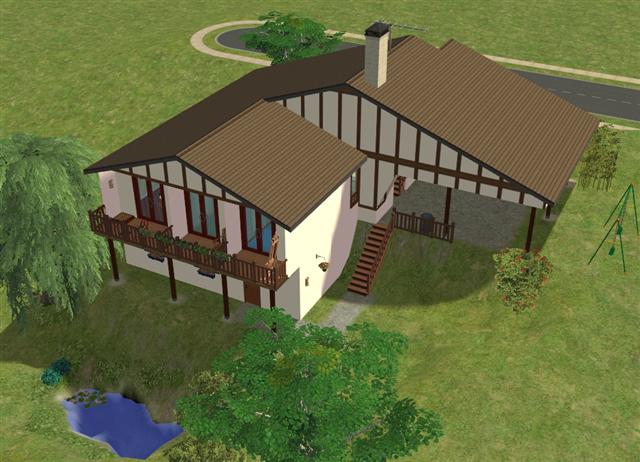 Although situated in Béarn, Mihura notes that the house has some Basque features, and the rear balconies with overhanging roof recall the French alpine style. The house is advertised as having four bedrooms, but to replicate this within the given floor area would have made the house virtually unplayable within the Sims 2. Therefore I made the fourth bedroom a downstairs one, currently only barely furnished as a home office.

The carport had to grow in width for Sims usage, somewhat spoiling the interesting dynamics of the original house's front roof line. Gravel driveways and paths are typical for this rural area. The house exterior is finished in white stucco, with the interesting timbered attic borrowed from a similar house in the region. Begonias are a characteristic flower, represented in this case by MaryLou's Flower Boxes and Macarossi's Begonia Escargot.

The rooftop antenna is a key indicator of a traditional rural landscape, but since none were available it became a major part of this project for me to create one. I also modified the simple wooden columns so that they would properly fit an attached carport. The correct chimney colour is provided by one from Numenor's collection.

I assumed that the left hand side of the lot, looking from the front, is the southern side. There is a substantial flat area behind the swing set that could be used for outdoor gardening. Note that almost all windows except those on the north side are provided with significant shade to make the house more comfortable in the summer heat of southwest France. 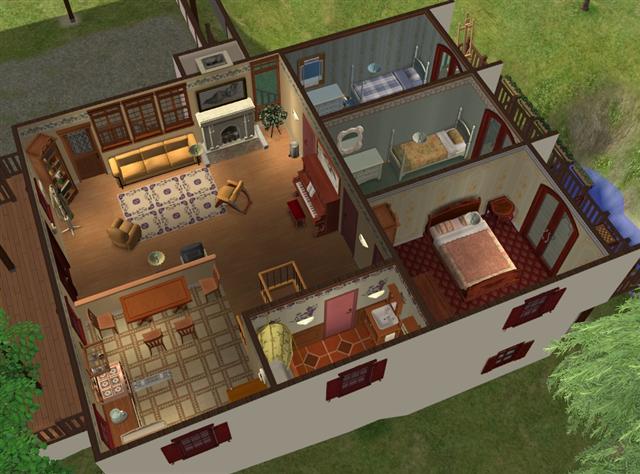 The interior is furnished modestly and practically, but with some emphasis on antique and rural accents. I would visualize the occupants as being professionals, perhaps commuting to a larger centre or working out of the home. But I know that Mihura has quite different plans for the house! 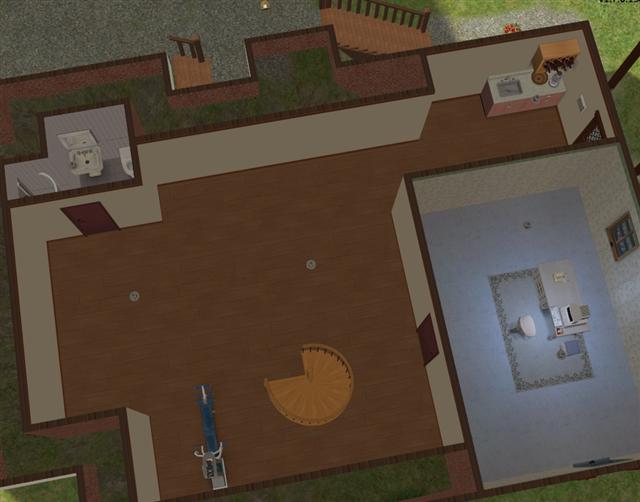 The original house has only one bathroom, but for playability I added a second one in the basement. The basement itself is accessed via marvine's fantastic spiral stairs. There is a small utility area near the back door, for processing the harvest from the apple trees. Apples are characteristic of the region, and two trees have been planted at the rear of the lot.

While the uploaded lot is brand new, allowing you to adjust its contents without wasting money, an identical lot has been successfully play tested. Note that there is a small issue with Sims departing from a car parked in the carport. I find that rather than directing them to immediately do something in the house I need to allow the Sim to exit the car first, then ask them to carry on with life. Personally I was happy to accommodate this slight glitch, rather than have the carport grow even larger (or deeper in this case).

The lot was developed using Numenor's AnyGameStarter, using only Nightlife and Seasons. I hope your Sims enjoy this touch of French country living. Please do not post this lot elsewhere.

You will find that the supplied archive contains the lot itself in standard Sims2Pack format, but that the custom content is contained in a separate directory. This allows for more flexible installation, and I also found that the standard Sims2Pack process failed to include three of the auxiliary files that are required for this content to work properly.

The packaging process also ruined the carefully positioned decorative content in the kitchen and living room. Since this content technically overlapped the two tile windows installed in these rooms, all of these windows appeared blanked out when the lot was installed from the Sims2Pack. I therefore went back and repositioned this content away from the windows, resulting in a much less attractive layout. If you wish these objects to appear as designed, please check their position as shown in the kitchen screen capture shown below. Use boolProp snapObjectsToGrid false and move_objects on to reposition these objects as desired. Also note that the phone was intended to be placed in the small wall space just to the right of the front door, with the intruder alarm on the wall space to the other side of the associated window, to the left of the bookcase.

Back to download view
17 Comments / Replies (Who?) - 16 Feedback Posts
Mihura

Bravo Sophie-David it's a wonderful house so typical from my heart's region ! Really I love it !

Good luck in this contest ! And a lot of thanks my friend !

Fantastique!! I'm very happy to see some french typical houses!! Though I'm french, I'd never seen Bearn house before, but my sims will play with it.

A Slight Problem with the Kitchen Chairs - Fixed!
Thank you! I was happy to do this house, it was a great learning experience for me. If not for Mihura suggesting this project and finding this house for me, it would not have happened. So a lot of credit goes to her.

The following problem has been fixed in the version that is now online...

Because this house uses completely new furnishings, it is slightly different from the house that was play tested. In play testing, I found that the kitchen chairs and tables had to be eased over slightly in the direction of the circular staircase so that the Sim eating in the chair closest to the stove did not become temporarily trapped. Press Control-Shift-C and then type boolProp snapObjectsToGrid false to allow the chairs and tables to be moved over slightly.

I had adjusted the position of the table and chairs in the release version, but with no Sims to test them, I guess I did not move them quite far enough. Note that the chair with its back closest to the circular stairs will still be on the kitchen floor, rather than on the wood floor of the living room.
jon119

Its really beautiful and makes a good contrast to all the other farms that are also amazing but rather American.

Thank you very much for sharing

Thank you Jon! It did me good to learn a bit about a foreign culture. The interior smallness of this house did remind me a bit of my English childhood, but there are many differences too.
Brighten11

Thank you Brighten11! I wouldn't mind visiting the actual house...

Thank you Patul! It is nice to see that we ended up with a few French houses in this creator challenge - enough to start a neighbourhood.

Thank you for the delightful compliment, Merhlicht.

I have got to stay away from puppies. My Sims are getting a lot of use out of this lot though, I use it all the time.

Quote:
Great! Thank you for the encouragement.

I love the house but i don't know how to open it in my game!
Sophie-David

Quote:
First you need to unzip the archive and copy all the package files to a Downloads folder. Then double click on the LotSegment file so that Clean Installer or the Maxis installer will install the lot in your house bin. When you are running the game the house should appear in the house bin so that it can be placed somewhere in your neighbourhood. I hope that helps, lottesims2.