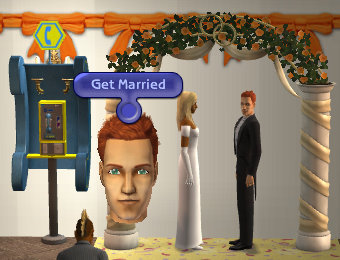 Tested with AnyGameStarter, all EPs installed up to BV.
After the wedding, the honeymoon van picked up newlyweds without a problem.

Obsolete in AL or M&G. Remove the fix if you have AL or M&G.

If you put this fix in Downloads folder, Celebration wedding arch will bear annoying custom star in thumbnail pic, and the delete button will be enabled.

Put it here to avoid custom star and delete button:


If your latest EP is patched FreeTime, you can put the fix here instead of StuffPack folder:

C:\Program Files\EA GAMES\The Sims 2 FreeTime\TSData\Res\Catalog\Bins
(or the corresponding folder on your system if your game isn't installed in C:\Program Files)

DO NOT remove z- prefix in the filename. It is for ensuring that this fix is loaded after SP objects, overriding original settings.

Back to download view
26 Comments / Replies (Who?) - 15 Feedback Posts, 9 Thanks Posts
Hide Thanks Posts for this thread (Show only feedback)
Page 1 of 2
Gizmo7680
Top Secret Researcher
THANKS POST

I am so happy that you made this fix!!
Such nice arches and not to be able to use them until now.
Thank You so much for making it possible to have a community wedding again.
abitha
Field Researcher
THANKS POST

Thankyou so much for this (:
Sim_Me
Moderator of pixels for pixels
retired moderator THANKS POST

thanx i'm so glad it can work on comm.also!btw is this "married"thing will be cinematic like with old a bit ugly arch or they will just put the rings?thanx
Sinthe
Lab Assistant
THANKS POST

I have a wedding lot in Strangetown that has been aching for just this fix. Thanks so much for putting in the hours modding this for us. It will get plenty of use in my game.

Thanks for the great mod.

Combitable?
This sounds great, I was just wondering if it is compitable with "freetime" and "kitchen and bath"? Hope it is combitable with the next EP's

I cant Download it, it keeps giving me error saying acess denied...so like, what do i do?? PLS GET BACK TO ME!! MESSAGE PLease!
ThaPyngwyn
Test Subject

I don't have this fix but (bear with me):
- I created a "Chapel" a while ago, and using the "collections workaround," I placed a wedding arch in the Chapel.
- I had many community weddings.
- That neighborhood imploded, so I stopped playing for a while.
- I got the remaining expansion packs (up to FT) and stuff packs, (all I had was Uni, NL, and OFB before) and went back to playing, but started a new neighborhood.
- I copied the Chapel (Lots/Houses Bin) to the new neighborhood, and just to be safe, I eye-dropped the wedding arch. Then I deleted both arches and placed the one from buy mode.
- I went to one of my sims and got him married to his townie girlfriend on the community lot.

I say all that to ask this: Was this issue fixed at some point after Bon Voyage, but before Apartment Life? (not a crucial question... my arch is working)
Lord Darcy

This looks very interesting, but I`m a tad confuzzled.

What will this do for me?
This Space Intentionally Left Blank
Lord Darcy

Quote:
The base game arch acquired this function in BV. To enable community wedding in pre-BV games, you have to find Squinge's Community Wedding Hack. Look for the version compatible with Pets, as both IKEA and TSS are based on Pets.
NO Requests! | How to update fridges/computers to FT | Booty - Get pay items for free!
Check out my Journal for updates on past creations.
Recent Updates: Pie Menu Text Strings Fix | Teen Style Stuff Computer and Stereo Fix | IKEA Home Stuff Objects Fix
GeneralOperationsDirector

Stupid me. Somehow I read your post as Deluxe. Note to myself: Must not post in a sleep-deprived state...

With this fix installed, you can use Celebration wedding arch in community lot. But you won't be able to use base game wedding arch for community wedding, because you don't have BV or newer EP. You'll need to find said Squinge hack for that. Should be available in Graveyard, or in his resurrected InSim section.
NO Requests! | How to update fridges/computers to FT | Booty - Get pay items for free!
Check out my Journal for updates on past creations.
Recent Updates: Pie Menu Text Strings Fix | Teen Style Stuff Computer and Stereo Fix | IKEA Home Stuff Objects Fix
GeneralOperationsDirector

I go to neither, as a rule, and those are not sufficient to send me there anyway, especially if your fix works for me as advertised. Thanks. I had built a park with a wedding area for my first-made adult Sim to get married in [she was my second-made Sim, as I made her teen-age daughter first, and CAF wouldn`t let me save-and-exit without an adult.

] and was a bit dissappointed when I couldn`t figure out how to get them married there.

IKEA is based on Pets? I was told that it uses the FreeTime engine. How can I tell for sure?
This Space Intentionally Left Blank
Lord Darcy

Quote:
Probably the person meant that when IKEA and FT are installed together, the FT engine is used instead of IKEA engine. That is not to say that IKEA's own SP engine is based on FT. As you don't have any newer EP than NL (included in Double Deluxe), you'll probably use IKEA executable to run the game.

The fact that a SP was released after an EP does not guarantee that the subsequent SP is updated to the latest EP.
If it were indeed based on FT, there would have been no need for me to create this fix.

Quote:
Look into the Object.package (not the SPObjects.package which contains SP objects) shipped with the stuff pack. The global BHAVs are only up to Pets.

I sincerely hope that upcoming Mansion and Garden stuff will update the SP engine to Seasons at least. Otherwise we will be stuck with shrubs and trees sans snowy texture. Imagine the horror in winter garden, evergreen shrubs sticking out like sore thumbs everywhere.
It will be an incredibly stupid move not to base a SP all about garden objects upon Seasons engine, but I would not rule out the possibility. Their stupidity hath no bound.

I do launch from the IKEA executable.

Yeah, I think I remember seeing that fix, now that you mention it.

I expect that when I become able to deal with BHAVs that they will be my best arena for creating mods, but right know, I wouldn`t know a subroutine call from a breakpoint.

I didn`t know another Stuff pack was in the offing. Great!

Then again, MTS2 is a super-mega-Stuff-pack.

If it hasn`t happened already, we will soon know more about their own best-selling product than they do!

Ah, I was wondering: Is it possible [nevermind for now how to do it] to build a tool that runs inside the game that will tell us --without making any assumptions about which stuff packs use which engines-- which engine a given installation is running on? Obviously, an installation with no stuff packs is using the engine of the newest expansion installed, but I`m thinking of interrogating the runtime directly, rather than just checking flags, if that can be done.
This Space Intentionally Left Blank
Jewel56
Test Subject
#23

404 not found for the mod in description... Please help?
Lord Darcy