"We Are Not Amused!" Queen Victoria!

Picked Upload! This is a picked upload! It showcases some of the best talent and creativity available on MTS and in the community.
Lo and behold - Queen Victoria – Empress of India! 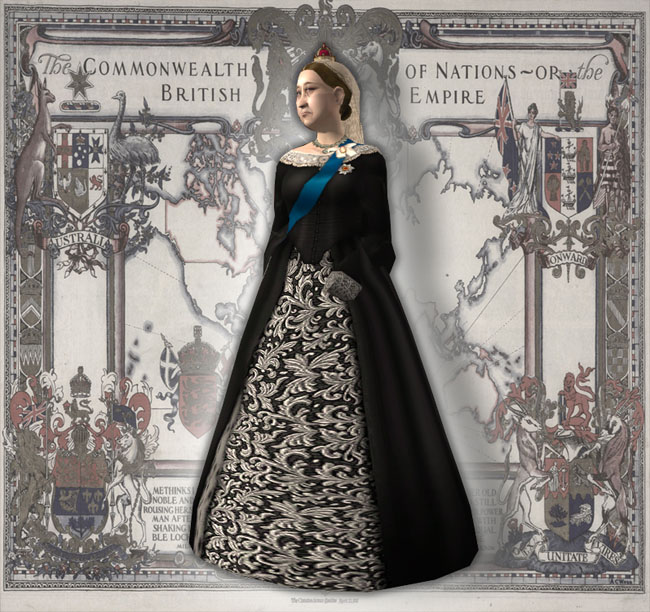 Because, you know, there would be no Victorian London without Queen Victoria! Ther wouldn't have been a Victorian Era at all! No Victorian values,
Victorian fashion, Victorian literature or Victorian architecture either. They would have been called something like, oh, I don’t know, “the Suzian”, “the Charlottian” or “the Margaretian” instead. And that just doesn’t have the same ring to it, or what? Just think about it!

Princess Victoria met her future husband, Prince Albert of Saxe-Coburg and Gotha, when she was just 16 years old in 1836. But it was not until a second meeting in 1839 that she said of him, " …dear Albert… He is so sensible, so kind, and so good, and so amiable too. He has besides, the most pleasing and delightful exterior and appearance you can possibly see." Prince Albert was Victoria's first cousin; his father was her mother's brother, Ernst. As a monarch, Victoria had to propose to him. Their marriage proved to be very happy and after Albert’s death in 1861, Victoria wore black for the remainder of her life.
As time went by Victoria began to rely increasingly on a manservant from Scotland, John Brown. A romantic connection and even a secret marriage have been alleged, but both charges are generally discredited. However, when Victoria's remains were laid in the coffin, two sets of mementoes were placed with her, at her request. By her side was placed one of Albert's dressing gowns while in her left hand was placed a piece of Brown's hair, along with a picture of him. Rumours of an affair and marriage earned Victoria the nickname "Mrs Brown".

Though Victoria ascended the throne at a time when the United Kingdom was already an established constitutional monarchy in which the king or queen held few political powers, she still served as a very important symbolic figure of her time. The Victorian era represented the height of the Industrial Revolution, a period of significant social, economic, and technological progress in the United Kingdom. Victoria's reign was marked by a great expansion of the British Empire; during this period it reached its zenith, becoming the foremost global power of the time.

I have made her as an adult sim. That's a must if you plan to breed her (nine children, remember!), although I' not sure how good of an idea that is :P. Let me know how it works out if you go for it.

The Sims2Pack contains the brown recolour of the hair. You can download the additional colours too if you want.

Now, just a couple of disclaimers: You will have to excuse that Victoria looks a bit on the cartoony side. I’m not good at making sims and I found that it’s not very easy to make sims look overweight without turning them into some freak show. But you can always harvest the CC and make a shinier, better Victoria if you like.

Oh, and if there happen to be members here who are experts on British regalia and orders, you’ll have to excuse me again. Victoria’s crown and orders are 100% products of my vivid imagination. Oh well!

As with all my custom content, you are free to recolour, re-mesh, put it up on free sites how much as you would like as long as you give me a little credit ( a link to this thread would be fine).

If you us Queen Victoria in a movie or story or something, I’d love to see it!

Thank you very much for these wonderful creations and for letting me use them with this sim!


Queen Victoria’s gown – New mesh and texture. The gown is available for young adults, adults and elders (casual and formal) and has a fat morph (what you see in the pictures is the normal morph – Vicky will become slightly fatter if you let her sit at the table too long…)

Queen Victoria’s Hair with a Crown - A new mesh for young adults, adults and elders with four colours (plus grey). This hair is purposely not binned. I wouldn’t want newly spawned townies and dormies appear in this hair, you see. This hair is for queens only!

Back to download view
38 Comments / Replies (Who?) - 31 Feedback Posts, 4 Thanks Posts
Hide Thanks Posts for this thread (Show only feedback)
Page 1 of 2
middlemore16
Lab Assistant

wow....ive never seen a well replicated victoria as this! Its just fab! Although queen vic never actually said we are not amused....its just made up..lol
Darth_Beeblebrox

Wow, that's amazing! She looks just like her! I'll have to move her into my neighbourhood right away and get started on her 9 kids!

finally, a historical figure who actually DID something to gain her fame throughout the ages!

wonderful job on her and thank you for the history lesson! <3
Hide all Maxis objects {|} Hide CAS screen objects {|} Want to be a real mermaid?{|} icon by yumehito

Fantabulous! It looks just like her, fat cheeks and all! I'm tempted to download this but i have nowhere to put her
AverageMcPosterman

Impressive.
Maybe I'll download her for a Victorian era neighborhood, if I get around to making one.
BEEP BOOP FELLOW HUMANS
Earcat
Lab Assistant
#10

She's magnificent. Of course, you're going to "have to" (only if you want to) make her Albert.
Alisar

wow! I was thinking about how she was pretty when she was young... signs of time goes by... great job, berg!

Berg, I love you. This is wonderful ^^
Runway clothing for your sims Doursim
AJSimon

Wonderful job! I think you caught her very well.

Downloading her for the New Londondium town I just started for my steampunk and assorted others that settled there. Have to get a castle now!
Kiraiko44

wow i love this dress haha and her expression is pretty priceless, deff says ur title all over. queen victoria always reminded me of the queen in alice in wonderland
nixie

Number 1, I love all your creations.

Number 2, I love Mrs. Brown (the movie) which sprung one of my favourite movie quotes: Nobody should think themself cleverer than the queen. Judi Dench, simply marvelous.

Number 3, what I thought about “the Suzian” lol, must be an era where everyone loves eating Suzette, “the Charlottian” ROFL, lets not go there, or “the Margaretian” ROFLMAO, I think most people would love this era! lots of magaretta!

Number 4, I think that's a very nice little intro you give to your post.

Number 5 THANK YOU FOR SHARING!

Thank you for Vicky, she is adorable!

Exceptionally good likeness - you've really caught her facial expression! If I ever played with Sims seriously, and not just to build lots, I would definitely include this lady in whatever neighborhood I play. Victorian or Suzian! Good luck in the challenge and thanks so much!
ajwatson82
Test Subject
#22

shes a beauty :D
not literally, of course. Victoria was one ugly dudette.
(forgive me for insulting the queen)

poo, im gonna get chucked in prison now for 'dishonoring' a DEAD queen.
Emphasis on the DEAD
I don't know who invented high heels, but all women owe him a lot.
-Marilyn Monroe
mllg0004
Test Subject
#24

The face and expressions look really great, and all of the fine details are just wonderful.