by vindicatedmess Posted 4th May 2008 at 6:56 PM - Updated 22nd Feb 2009 at 6:41 AM by vindicatedmess
79 Comments / replies (Who?) - 25 Feedback Posts
Picked Upload! This is a picked upload! It showcases some of the best talent and creativity available on MTS and in the community.
Destiny Hope Cyrus or Miley Ray Cyrus was born in Franklin, Tennessee on November 23rd, 1992. She is an American singer, songwriter and actress best known as Hannah Montana. Recently, Cyrus has been the talk of the news over the "Vanity Fair" controversy, where she posed with her bare back exposed and a bedsheet covering her front.

“I took part in a photo shoot that was supposed to be ‘artistic’ and now, seeing the photographs and reading the story, I feel so embarrassed. I never intended for any of this to happen and I apologize to my fans who I care so deeply about," says Cyrus.

Still, Miley Cyrus is an influential and bright young woman that all young girls look up to and is entitled to make mistakes as a young teenager.

Also, I made Miley Cyrus Sim as a Teen Sim. 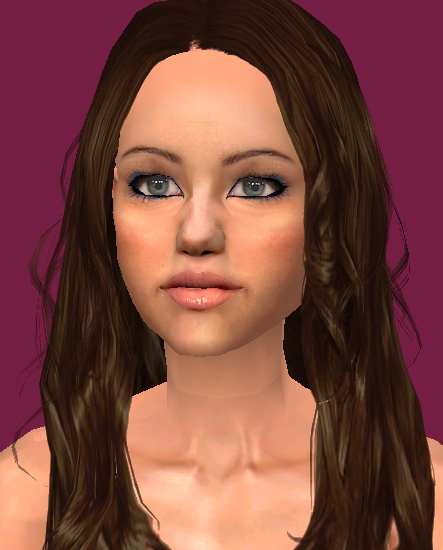 Please do not reupload/redistribute this sim or my othr creations on sims2 related sites, thank you

Back to download view
79 Comments / Replies (Who?) - 77 Feedback Posts, 1 Thanks Posts
Hide Thanks Posts for this thread (Show only feedback)
Page 1 of 4
lizard_luver

Thanks! Now I can kill her in game. >

i dunno why everyone hates her. i mean come on, shes a teen! You go look at some teen myspace pics and i guarantee that those pics are WAY more sex oriented than hers. grow up people.
MJSpice2
Test Subject
#4

xD This is amazing. I specifically came on MTS2 today to find a miley cyrus to download, and this was the first download on the page.
mickeymouse254

Yay! I can think of at least 10 ways to murder the talentless wench! Thanks!
agirlundone
Test Subject
#8

This strangely looks like her...the eyes are a bit cloudy, but good representation over all.
KillingSpoon

I don't remember anyone saying anything like that at all yet.
But I do agree with others in saying I just don't like her as a person overall.
If I came onto the scene as a star by being a really nice, loving person to young fans, why would I dance sexy in skin-tight clothing and act like any normal teenager?
It sounds weird, I know..I assume it's the media telling her to do that too, but if she wanted to be more like herself, she should've came in as herself.
Anyway, Disney told her to 'cut it out.' So more sacrin-coated generic singing! Huzzah!

Nice job on the copy, vindicatedmess. It does look like her.

Just as unattractive as she is, great job!
oceanpupz
Test Subject
#11

I don't find Miley "unnatractive," I mean she's a cute girl. I just happen to dislike her, myself. She's quite... fake.
The Sim, though, looks quite a bit like her. Good job! <3
I did NOT make the horse mesh! Only recolors. I do not control the mesh! Please do not message me to do something to it, whether it be a new pose, or updating it to Sims 3. I can NOT do this. D=
vickig
Test Subject
#12

Finally! Something of "Hannah Montana" that won't cost me a penny. My 12 year old grandaughter is a huge Hannah Montana fan, and in preperation for her trip here to spend the summer with us, she has presented me with a list of Hannah Montana stuff she wants. Well, only Miley Cyrus could afford all the Hannah Montana stuff out there!
Anyway, thank you, I know this will delight her since I got her hooked on the SIMS several years ago and a Miley Cyrus SIM will definately make her a happy young lady. Nice likeness! Thank you very much.
ArenaBetty

Good job! Looks a lot like her. Now I will have to have my Brad and Angelina sims adopt her.
sari_luna
Test Subject
#14

But vindicatedmiss, you did a fantastic job with the sim. She looks exactly like the real Miley. Excellent job!
JLonier

Let's stop the bickering about the person's actions and focus on the work that was done to simmify her. If you want to debate her behaviour take it to S2C, please. There's probably already a thread about her over there. Comments in this thread are for thanks and constructive criticism. Anyone doing otherwise from here on out will receive a warning.

That said, this looks a lot like the actress herself. Well done.

As much as I dont find her work to my liking, you have done a brilliant job with the Sim version. :]

She looks pretty spot on to Miley herself, great job!
simotized

~I think she's adorable & my daughter admires her,also being in the spotlight can have a negative effect on decent individuals,look what happened to Britney Spears.My daughter thanks you~
Christy1077

This is a great sim overall, I don't know why so many people would stoop so low and post immature comments about it, it's beyond me.

The "teenage celebrity" is a tricky one to Sim. This is a very good likeness though. I think you captured the essence of who Miley Cyrus really is (not to confuse her image with the likes of Paris Hilton or Nicole Ritchie). She is indeed a "child" star who children have elevated to uber celebrity status and I think you have captured her innocence quite well.

Good job!
Creativity is giving the soul permission to leap beyond the boundaries of the ordinary!
~*~Stephanie~*~
sugarpuffsam

Pretty similar to the original

Since you made a skintone just for her, I'd like to comment on the nose texture of the face. It's not very defined and while the shape of the sim's nose itself seems fine and spot on, the texture on top of it is sort of turning it into a blobby mess. I don't know if it's a problem with the base skin you used, or if you did some alteration to the face to help with the likeness of the sim.

I've seen this before in the Creator Feedback Forum with other sims that people were trying to create. For some reason, if you do a lot of modification to a nose in bodyshop from whatever template the skin creator probably used to do the facial modeling, the face begins to look funky. I think she would look ten times better with a different nose texture.
rachaelgrae

wow this looks great! I saw it and immediately knew who it was!
Troubledgirl

I'm not a fan of Miley Cyras at all, but I have to admit that this sim is very pretty, so I will d/l her. Thank you for sharing her with us.
FaMulan

I recently started to really hate miley cyrus but your sims is wonderful! I just really hope you could do more HM characters