38 Comments / replies (Who?) - 24 Feedback Posts
Picked Upload! This is a picked upload! It showcases some of the best talent and creativity available on MTS and in the community.
StayInLove Global hack for Sims 2.

I made this hack because I never really liked it that Sim teens would grow up and fall out of love with their girlfriends. It's debatable whether that's more or less realistic.

When Freetime came out, I had big hopes that it would change this. Freetime allows you to grow three townie friends along with your Sim when he/she transitions to the next age.. Teens turning to adult, though still fall out of love.

Not anymore! The StayInLove hack retains teenage love and crushes after a Sim grows to adulthood. And since, with Freetime, your teenage Sim boy can grow up his townie girlfriend simultaneously, they never fall out of love and are ready to get engaged and/or married immediately after blowing out the candles. 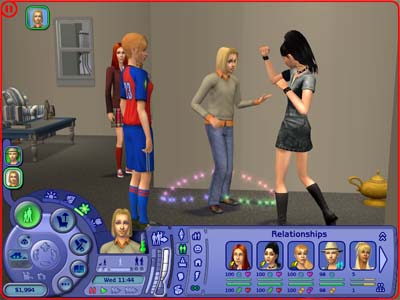 Here is Ricky Roundtable and his three girlfriends. The one in the red shirt is his current Going Steady girlfriend. Note the thumbnail pics at the bottom. Ricky's time is up, and he's becoming an adult. 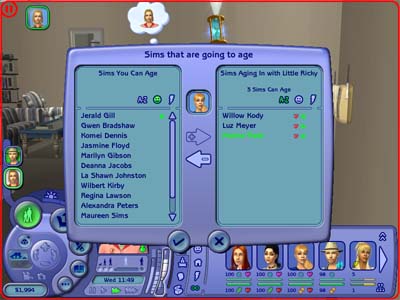 Freetime, as usualy, asks for a list of three friends of Ricky to age up with him. We will pick all three of his girlfriends here. 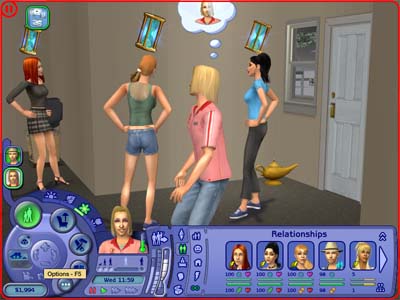 Ricky is now an adult in a pink shirt, moping about his not going to college. Also, all three girlfriends are now adults, as well, and as the thumbnails at the bottom of the pic show, he is still in love with all three. BUT there is a difference -- he is no longer going steady with Martina. 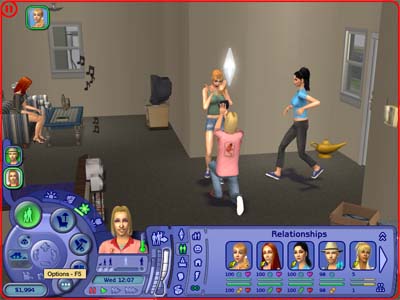 Ricky asks Martina for engagement, and she accepts. The other two will freak out after he kisses her, which isn't pictured here.

Also not shown here: Any teen loves that don't grow up simultaneously will still be in mutual love with our new adult sim. However, they won't be able to interact romantically because the basic game doesn't allow teen/adult romantic interactions, which is fine by me. That isn't the point of this. Teens with crushes on adults CAN, though, become JEALOUS, which is your problem, not mine.

This is designed for and was tested with Sims 2 Freetime installed. It may be compatible with other EPs, but I won't make any guarantees. If you don't have Freetime, try it at your own risk (although I suspect no problems.)

This might not be compatible with Inteen. In fact, it very likely isn't. I don't know.

Unzip the DOOFStayInLove-Freetime.package file into your "EA Games/The Sims 2/ Downloads" folder. It should automatically work the next time you start your game.


How to Use/What it does:

When your Sim teen grows up to adult, he will stay in love (hence the name) with any girlfriends he had. If they grow up to adult with him (one of the nicest features of Freetime), then they will grow up to adult together and still be in love. Which was the whole purpose of this mod. I didn't like having to make them fall in love again.

If your teen Sim (or any of his friends that grow up to adult with him) was Going Steady with another teen, the Going Steady icon will go away. And they won't be going steady anymore. Obviously. But they will still be in love.

If your Sim teen grows to adulthood by leaves a girlfriend behind as a teen, she and he will still be in love or have a crush. However, they won't be able to interact in a romantic way because those teen-adult interactions are not allowable in the standard game, and I'm fine with that, myself. However, teens and adults in love can still become JEALOUS of others, which can lead to slaps and flaming dog poop on the porch.
Tags: #freetime, #stayinlove, #hack, #global

Back to download view
38 Comments / Replies (Who?) - 29 Feedback Posts, 7 Thanks Posts
Hide Thanks Posts for this thread (Show only feedback)
Page 1 of 2
WolfoftheNyght
Lab Assistant

Hmm, that's a great idea for a mod

I hadn't noticed it until recently (my sims have been going to college as of late) but that did bother me a little bit. I'll download this and give it a try ^^ Thanks!
CatOfEvilGenius

Thanks, this was really needed! How silly is it that if Janey and Sam are high school sweethearts, and Janey goes to college, she no longer cares for Sam, or vice versa? Also, when I age two teen sims in love, I want them still in love!
Please spay or neuter your pets. --- Cat Music Video! --- my meshes
TashaFaun

TwoJeffs has had this hack for quite awhile called Teens keep loves. I'm sure I will get flamed for pointing this but its the truth. Not that its not cool that you did it yourself but its still something that has been done.
rhldavies

Is the TwoJeffs version updated for Freetime like Doc Doofus's hack is?
[R.I.P. Munti 25/01/08 - You made me a better person. I miss you so much it hurts]
Zexxa

Sounds great but it seems MTS2 is not longer totally free as when trying to download I get "You are not allowed to get this file. If you are a MTS2 supporter, or a Featured Artist, or a MooMoo winner, then you must log out of the site and log back in again to access these pages. "

MTS2 is still free, that is a server bug
I am simply a mass hallucination that a majority of the population chooses to believe in.
AnnieBonnie

Good point. I didn't know about that. I just now downloaded his version to look at the code, and there seem to be some slight differences (mine is smaller), but his version looks basically similar and it is Freetime compatible. Unfortunately, it's hard to know when we are reinventing the wheel because nobody knows everything that is out there. I was worried before doing this (and three other hacks I have lined up) if they have been done before, because nobody seems to know everything that's out there.

One reason I went ahead with it, though, is that a lot of the teen-adult oriented hacks are designed to do more rather than less. Like, be compatible with Inteen, which is fine, but I want nothing to do with Inteen. I just wanted something simple, based on the latest patched Freetime version of the code.

Two other hacks I have lined up:

Teens go on Vacation (without adults). Nobody knew of a similar hack to do the same thing. I haven't submitted it anywhere yet. Nobody seems to know if it has been done before, although it seems impossible it hasn't.

Slower Freetime Aspiration Benefits, to slow down the rate at which Sims earn aspiration benefits so they don't go permaplat so damned early.

I was also thinking last night of making a Gypsy-buyable potion that would give you an instant amicable divorce.
ghogin

This is really nice to have as I wasn't aware or didn't really pay attention to the other one that was available. Thanks for your hard work and uploading this on MTS2 because it is something I will definitely use.

Looking forward to the teens go on vacation one as well AND the quicky divorce! ~
ganguro

i think this hack might be pretty useful...but i have one question...is it compatible with inteen???
Y2kRobie

I love this one Doc and the ones you have planed as well.

SIMale the Simlish linguist. Simlish made easy: Version 1 & 2 and Version 3 & Comic (Now only available at IS)
s_sut

thank you very much
I can't speak read and write english. I'm sorry if you can't understand!.
FionaSkye

That is a brilliant idea! Do give it a try, because I would love to try it out in my game. And thanks for making this hack simple - sometimes I think we downloaders forget that bigger isn't always better; sometimes it just means a slower game!

is it can be sims tiem now plees?
gosims
Test Subject

hi letting you know this does not work with inteen.if you have inteen this mod will not work.it conflicks.i have all expanshion & stuff pks, inteen & a number of other mods.inteen is the only one i have found so far that it conflicks with.

hope this helps thanks donna.
ganguro

thanks for this info! then i can't have this...

If you all read all of the creator's comments you'll understand there was no intention of making this compatible with Inteen. This is just a great, straightforward mod for those of us who don't or can't deal with the extra complications that something like Inteen brings.
What if one little pop could open a world of wonder
So sensory, so satisfying. It's the magic Friskies makes happen every day in so many ways
Friskies, feed the senses. Cat sez eff that, gimme cheezburgers.
paksetti

Do you have a link to that one? I only have NL and SSN.

Thanks so much for this one.
When will you update it for Apt. Life?
It's true that Twojeff from simbology.com have one similar
but yours gives the adults sims to have their first kiss even if they meet
the mysterous sim and I asolutely love that.
Again thank you for this.
Please update it soon.
Hollister425
Banned
#24

This message has been deleted by JLonier. Reason: stop it
Lavaster

This is GREAT, thanks! Before I got Freetime, however, I had (dang, I forgot his name!) that one Smith teenager grow into an adult, but his girlfriend (Ophelia? Was that the name?) stayed a teen, and they fell out of love. LOL
Anyways, thanks!!
ENTJ