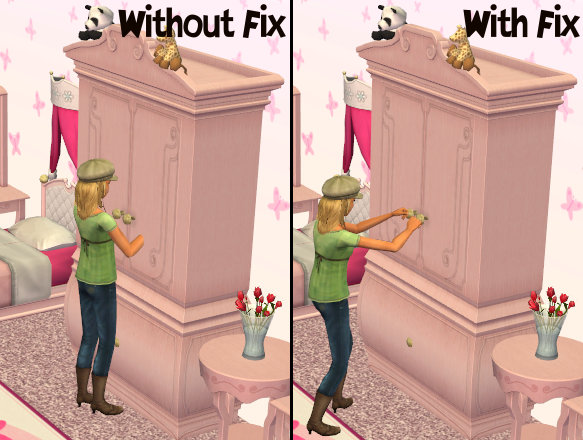 2008-08-31: This fix was rolled into Stuff Pack Objects Fix Collection for Apartment Life in Apartment Life. If you have AL, remove this fix and get the new AL fix.

Note: This fix is intended for Pre-FT games only. I made a separate version so that pre-FT players can use it safely.
FreeTime players are encouraged to get the new version of my other fix, Teen Style Stuff Objects Fix for FreeTime, which includes this fix as well.


Teen Style Stuff Pack is made of PHAIL. This is my third fix for this pack alone.

OFB introduced "small armoires" and "small dressers", which occupy less space, have decorative slots on top (in case of dressers) and can be placed at bedside without blocking the bed. As Teen pack is based upon Pets engine, which includes every semiglobal from all previous EPs, it can handle small armoires just fine. But these idiots gave Teen armoires the animation for normal armoires, not the one for small armoires. Sims' hands will pass right through the armoire door, resulting in unsightly b0rkage as shown in the screenshot.

Back to download view
6 Comments / Replies (Who?) - 1 Feedback Posts, 4 Thanks Posts
Hide Thanks Posts for this thread (Show only feedback)
Menaceman44
Mad Poster
THANKS POST

MORE problems?!?! Why am I surprised?
I'll make sure to downloaded the updated version from the other thread as I own FT.
Thank You!
fway
Top Secret Researcher
THANKS POST

Oh that's just hilarious, I can only imagine if I could put my hand through my dresser like that. Thanks for sharing, although, I already have your freetime fixes.

First I wanna thank you for this amazing UL

Second, I would like to know if this works with apartment life?
I hope someone will answer soon

Kims Killing, if you read text next to the

symbol in the main post you will see that this is now part of a larger mod that has been made for AL.
My deviantART, MTS Yearbook Origin ID = Alistu
SimmySue29
Forum Resident
THANKS POST
#6