by HystericalParoxysm Posted 2nd Aug 2008 at 11:28 PM
148 Comments / replies (Who?) - 23 Feedback Posts
This is a Maxis Recolour which means that it is a recolour of an item that already exists in your game. Please check the Expansion pack requirements to see which game pack it recolours.
Picked Upload! This is a picked upload! It showcases some of the best talent and creativity available on MTS and in the community. 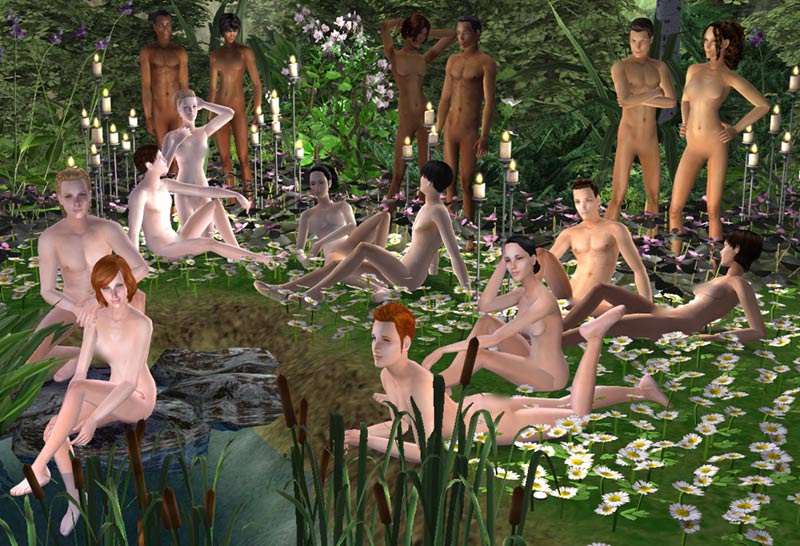 So I was taking a look at my original Idolatry of Flesh skintones and got to thinking, "Hmm, they're both a little bland, having all the same faces, and sorta orangey." Maybe it's my new monitor. Maybe it's my new cybernetic eyeballs. Who knows. But I decided it was time to do some recolours.

This set features 8 distinct recolours of my Idolatry of Flesh skins, ranging from quite pale to quite dark, in both rosy and not-so-rosy tones. The body details are the same as on my previous Idolatry skins, but the skin of each face is unique, and works for all ages.

Delight: Quite pale and pinkish, with a soft, gentle face with light, rosy freckles across the cheeks and nose.
Illusion: A pale, smooth asian tone with glossy lips and a bit of a mischevious look.
Blush: A very warm pink shade with blushing cheeks.
Afterglow: A warm tan tone with a couple small freckles, and a more serious look.
Subtlety: A cool tan tone with numerous small beauty marks, and a turned-up nose.
Innuendo: A cool tan-to-medium tone with a lot of detail in the face, and slightly feathered lip edge.
Intuition: A rich dark tone with very soft lips and freckled cheeks.
Adoration: A warm dark tone with a slightly asymmetrical, turned-down nose and little bags under the eyes.

Not all tones may look their best on all face shapes due to the unique texturing. This is intentional - I wanted them all to look quite different. Therefore, they are not really suitable for defaults.

Brows: All by me.

Makeup: Models are wearing -no- makeup!

Models: All edits of my own or linuslover30's sims. Models will not be offered for download as I honestly can't remember whose are whose.

Very beautiful. Thanks for sharing!

Will they replace the older ones?
HystericalParoxysm

BloodRaven_1564 - They don't replace anything. They're completely new and fully custom so they're more an add-on than any kind of replacement.

“Dude, suckin’ at something is the first step to being sorta good at something.”
Panquecas, panquecas e mais panquecas.
pacotacoplayer
Scholar

Gorgeous presentation and product, thanks so much !
Call me Paco!
Rhymes with Taco

These are beautiful! Just what I was looking for. Thanks so much!
noxxname
Test Subject
DELETED POST
2nd Aug 2008 at 11:58 PM

This message has been deleted by noxxname.
Yuge

Very very Wonderful!
Thank you so much!!
spiffeystar
Field Researcher
#7

Wow!! You continue to amaze me

Do you have any plans to redo your defaults? Either way, these are BEAUTIFUL!!
Hooligans
Lab Assistant
#8

Wow, thanks! I'll be sure to check them out when I get them into BS. It's not that hard to make something Townie-friendly anyways, so I'll probably be doing that. :3 I dl'ed your original set a long time ago, although I edited them to my own needs, admittedly. After which I got really burned out on making skins for a while. XD It's nice that now I don't have to (although I probably will be making some more later. Just cause).

Also, thanks for writing down where to find the poses under--I've been google-failing for about an hour now. So...thanks.
And it's gone, baby, gone.
takeMe_back

awww, I like the originals very much and the recolors are so beautiful! >.< Thanks!
callistra

I'm in the process of making defaults from these

My downloads folder is going to hate me for this but the pale skins in particular are just too good not to have.
Quinctia

While I use your green Idolatry skin as my alien replacement, I'll be honest and tell you that the lighter shades of your original set were deleted as soon as I saw them in game. And, while I was a fan of the coloring and shading on the darker tones, especially on the body, the facial texturing was iffy, especially around the eyes. I still liked the skins enough to use some makeup to get around that, but I'm glad to see more skins with different facial textures. Especially since I thought you actually got the shade of the darker tones correct, which a great deal of skin makers aren't able to do.

Going to check these out--always happy to get more skins into my gigantic skin folder!
HystericalParoxysm

Quinctia - Heh, well, to each their own - I did try to lighten the area around the eyes on the darker skins in this set to reduce the heavy shadow look. I don't 100% love every one of 'em but I figure there's enough variety here for most tastes, and once I can stand to look at skins again, I might do a few more unique faces in the darker/midtone range to flesh out the set a bit more. Flesh it out. Tee hee, I made a funny.
my simblr (sometimes nsfw)

“Dude, suckin’ at something is the first step to being sorta good at something.”
Panquecas, panquecas e mais panquecas.
julii19

oh god, these are amazing! i really like the fact that the faces are different from each other, it gives some variety to my game which i think it's great

oo these are great HP
i have to confess that; due to the settings on my monitor..most of your previous skins were *FAR* to yellow/orange so i had to remove them...but these look excellent! none of them seem yellow to me! this is really great...thanks.
(also...i love your screenshots. how did you do the light rays? NL rave lamp?)
http://nightracer.tumblr.com/
Violet Tonks

I really do hate you HP

Just when I think I've FINALLY finished genetisising and townifiing ALL my many skintones, you do this to me!

*Shakes fist and wanders off to go fire up SimPE*
Can't stop the signal
MohicanTunes
Lab Assistant
DELETED POST
3rd Aug 2008 at 1:55 AM

Very beautiful skintones!I downloaded your previous set but I thought the skins were a bit too yellow and the default set too dark, but these have a very beautiful rosy tone, that I love!Thanks a lot!
Need to bin the hair you create? To geneticize your eyeset or skinset? so PM me!:)
AJSimon

Great skintones!
Thanks
"Alas, poor Yorick! I knew him, Horatio."

*drools* Ok hysterical your gonna kill me but anyway.

Personally i thought your other skin tones where bland as well and i didn't like the colours really , but now that you have made new recolours and different faces i love them

Btw you were right about they make your sims look ugly if its an ugly sim and make's your sim look pretty when the sim is pretty.

Thanks for the skins ^^
Creativity is more important then Knowledge
jacciinatl

Ok I'm sorry, but do you people hear yourselves. "I hated your other skintones but I guess I'll try these out." Have none of you ever heard if you can't say something nice say nothing at all. If you don't like what a creator has made for FREE then make your own stuff and then post it. You people are ungrateful and rude to boot. I don't even comment here or socialize on MTS2 any more because you all have become greedy and complacent in demanding things from people. So yeah, if it were me I'd snatch my skins down, the old and new ones too.

Sorry HP, I didn't mean to thread jump but I couldn't just not say anything. I have your skintones and everything else you've created and I love all of it. I'm also super excited to see new tones from you and I appreciate that you did this for free for the community. Again I apologize and feel free to remove it but I felt it had to be said.
DigitalDollies
LiterateCat

At least me, I'm not saying I hated HP's former skins.I just said that these skintones are an improvement of her former skins and that I like these much better.And I'm saying this to hers because we should tell the creators what we like and what we don't like, to allow the creator to improve his/her work.If we just lick the creator's boots, we are not being helpful to him/her.
Need to bin the hair you create? To geneticize your eyeset or skinset? so PM me!:)
ShanOw

yes. that is part of being in a community like this. it provides helpfull feedback so creators know what people like and dont like about there sets and can improve upon them. for instance; HP now knows that noone realy perfers yellow-ey skins and can try to avoid that. its not being rude---if anything it whould be rude to go "I THESE ARE FANTASTIC I LOVE THEM ALL OO THANK YOU" when you really dont like them. you provide feedback to the creator so they know what the people want. not rude at all. if *you* dont like it then maybee communities like this arnt for you...

and to avoid totaly and complete hijacking: again: i love this. i just opened them in bodyshop and there great. every skin makes the same sim looks far diffrent; i dont think there is a skin set like this out there. thanks agian and keep it up.
http://nightracer.tumblr.com/