26 Comments / replies (Who?) - 24 Feedback Posts, 1 Thanks Posts
I was going through Death Note sim stuff earlier in the afternoon and saw someone made a skin that had the scar on it, but said wished that it could be removable since everyone uses different skintones for Mero (Mello if you prefer).

I spent probably an hour and a half making this afterword. I'm satisfied with it to be honest, not sure if anyone else will be though. This is my first time uploading something to MTS2 and I do hope it's satisfactory.

I put the skin on my Mero-Sim quite obviously. Only things in the image I claim other than the fact it's my sim, is the scar and shirt (which was the project I assumed right after completing the scar).

The scar can be used for any skintone, created soley by me. The most reference I had was the screenshots from the anime/manga. (And It's a grueling process when I attempt to do something. I change the coloration, then add one tiny detail and uhp! I gotta change the coloration again cause it doesn't look right anymore. ^_^; Picky is Me.) 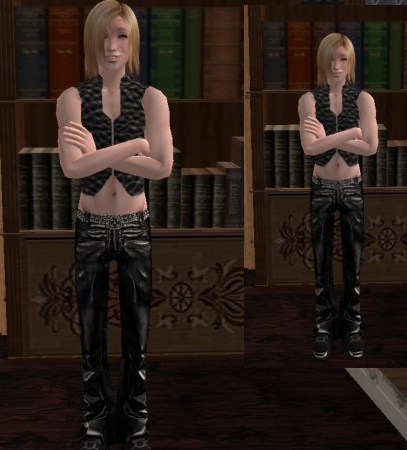 This is a far back screenshot of the whole sim. You can see how the scar looks from a distance. (I plan on uploading the shirt later for those who want to use it). 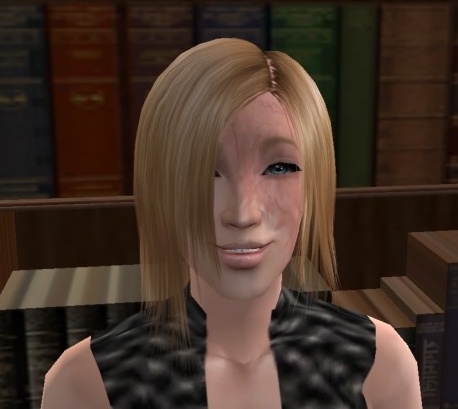 This is the closeup. I tried to make the scar follow the boundaries of where it is in the manga/anime. I think it came out well. ^^y

The hair is by Louis, you can find it here:
http://www.modthesims2.com/showthread.php?t=211909 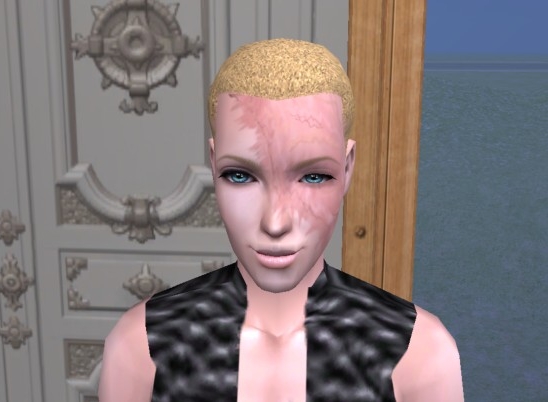 This image is meant to see the entire scar, the hair is maxis based obviously.

Well, I had planned on uploading the shirt, and the sim entirely for those of you who asked. But my computer had a major malfunction, and I lost everything in the process. I'll work on creating a better shirt, and a better Mero sim for you all, and possibly try to make my own recolor of pants.

Back to download view
26 Comments / Replies (Who?) - 24 Feedback Posts, 1 Thanks Posts
Hide Thanks Posts for this thread (Show only feedback)
Page 1 of 2
BlueOrchid254

Woo, I must tell xizarix, who made that skintone for Mel! Thanks! :D
legiolinde

thanks, going to pop this on my mello sim and try it out

OMG!!! This is really good! Could you please upload the shirt? I like it alot.
Thanks again for the scar!
O.O I see you :D
Sydintheuk
Test Subject
#6

is this also for women?
if so, im making me an alessa xD
looks like a very relistic burn-scar.
Sydintheuk
Test Subject
#7

oh, whoops, i thought it was a skin tone.
o_o
*walks away*
DIALARIEL

It should work on both men and women, any age, any skintone.
Thanks, I tried hard to make it look right. ^^
DIALARIEL

I'll see if I can get around to it. ^^
I tend to get pretty busy.
Your welcome, it was entertaining to make.
DIALARIEL

No problem. ^^ Hope it's enjoyed.
Emery_Bored

This is really well done. It helps too, because it's somewhat weird when Mello's kids mysteriously sprout burns when they hit adulthood. Hmm . . . looks like burns are hereditary, hee hee.

I have a lot of respect for people who are this dedicated -the scar is very realistic and will be on my Mello sim as soon as Body Shop loads. Thanks a lot!
D.W. nut, and proud of it!
DIALARIEL

It's no problem at all. ^^ That would be weird. I was playing Mero without the scar before-hand. Love when I get little bursts of inspiration, good things come out of it obviously. XD

Again, you're welcome. ^^ I need to get around to the rest of the scar, I never finished. Just the facial part. XD
the_toll_of_death
Test Subject
#15

Please upload more from your wonderful world of Mello. =D I mean. That shirt is the best Mello shirt I have ever seen for Sims 2. (And I have seen a lot of crappy ones.)
JamesBevan9690

His Name Is Actually "mello".

Thank you so much for this! I have an original character with bad scaring on the left side of his face, and I've been putting off making a Sim of him because I couldn't find anything that worked. This is exactly what I was looking for!
RhineGold
Test Subject
#19

And if you ever made the rest of the scar, I would definitely use that, too!
oykucuk
Test Subject
#20

This is amazing, I love it <3
Insanity is the emergency exit - Joker
Moonfrost214
Test Subject
#23

lol, just a random thought, but I think this scar would look awesome on Zuko, too. C:
mackieG13
Lab Assistant

Quote:
Only the first L is the best....but I gotta admit...it would just be an endless loop with L alive.