What's new? Two recolors of Marvine/Beosboxboy's bodybuilder underwear; Rahan's "minimal" outfit, in yellow and brown, similar to what he had before, but WITH the sexy muscles!

To get this new bigger Rahan in your game, you need:

Marvine/Beosboxboy Body mesh and Underwear mesh for the bodybuilder; get these meshes here.
(You need to get "MESHES_nude.rar" and "ju-beos_underwear.rar")

Rahan the sim (available in the "Downloads" tab below)

Rahan's New bodybuilder clothes (available in the "Downloads" tab below) - this is Rahan's normal outfit WITH muscles, as shown on the picture above.

While you're at it, feel free to download one of Marvine/Beosboxboy's showerproof skintones and use it instead of the one I used on Rahan's sim. And if it's the first time you download Rahan, don't forget the hair mesh. Get the hair mesh here. 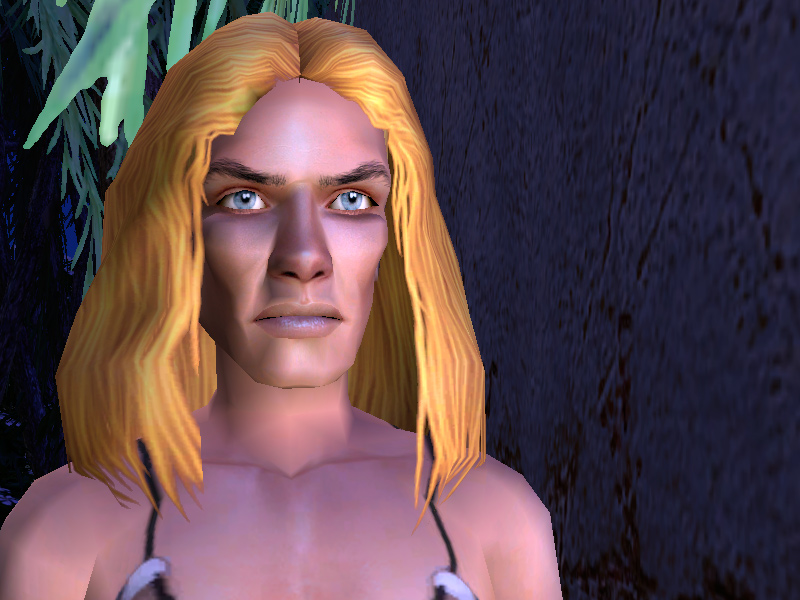 Hero of my childhood, that I've seen for the first time in a magazine called "Pif Gadget". If you're French or Quebecer and of my generation, you probably know him. He's been in magazines, comic albums and on tv. If you've ever watched the tv show, you probably remember the theme song.

Rahan is a prehistoric hero on a quest to gain and spread human knowledge, fighting for justice and freedom, meeting the peoples of the Ancient Times and making friends everywhere he goes.

I'm bringing him among your sims, for all the Rahan fans. Even if you're not a fan, you can be friends with Rahan too.

I suggest you make him either a Knowledge or Popularity sim, or both if you can, as his life is all about sharing knowledge and making friendships.

*** Not-Included content ***
HAIR MESH
Rahan isn't Rahan without his hair!!
You'll *need* the hair mesh, by DJ_Mur3 here at MTS2. Seek his "New Mesh: Male Fuzzy Long Hair". For Rahan you just need the Mesh as I am providing the recolor. Please put the Recolor and Mesh together in your Downloads folder.

Thanks to these people for allowing me to include their creations on my Sim.

Eyes
My Sim comes with blue eyes. Rahan's eyes might look darker on certain pics, but on others and in the tv show they were clearly shown as baby blue, to make him even more a contrast from the other Neanderthal men. If you'd rather have him with darker eyes, just set that when you put him into your game.

Outfits
I included two outfits with him, which are recolors I made from the Maxis briefs for men. If you check the pics on Rahan.org's website, you'll see that the color of his outfit changes from yellow to brown at times, and sometimes it's just a briefs, sometimes it's a much longer loincloth. Most of the time, I've seen Rahan wearing yellow briefs, so that's what's coming along on the sim. The second outfit is a brown briefs, similar to the yellow one, but with a slightly different texture. Both outfits include the Bear-Claw Necklace. From the cartoon pics, I wasn't able to tell if the briefs were made of woven cloth, animal skin or what, so I made them two different textures of leather.

Missing details
You might notice that the little string all around his waist is missing. That's what holds his knife tied to him, which knife is also missing. I still didn't have the time to learn to mesh. When I do I'll make a new version of his outfit, with the knife included, tied to him with the little string like in the comic.

Necklace
The string of his necklace is much darker on my sim than on the comic pics I've put here. It's another item that changes from time to time in the comic, sometimes the string is darker, sometimes lighter, and sometimes his necklace has 5 claws, while most of the times, it has 6. When I was young I had a Rahan necklace coming with his knife, packaged with a magazine I had. The necklace string was quite dark and had 5 claws. Later I saw a drawing by the author showing the necklace with 6 claws on a dark string. That drawing explained the deep meanings of each of the 6 claws, Generosity, Courage, etc... So for this one, it shows with a dark string, and 6 claws, like in that drawing. Later when I learn to mesh, I'll make the necklace a separate accessory, not anymore part of the outfit, and if enough people get interested, I might make the different versions, with 5 or 6 claws, and with a yellow or dark string.


For now Rahan might feel a bit lost without his knife, and a painted-on necklace won't fool him for long. But I'm sure you can still make him happy in your Sims game until I can give him better.

Additional Credits:
Rahan is (c) Cheret/Lecureux, authors of the series. Thanks to them for giving me permission to use their character as inspiration for this upload, and for letting me use their pictures. Check their website here, Rahan.org. All infos on the character and stories are there. They have tons of awesome pictures! There's also a french version of the website here Rahan.org in french.
Tags: #Rahan, #Son of Dark Ages, #prehistoric, #upper paleolithic, #neanderthal, #cro-magnon, #homo sapiens, #early humans, #stone age, #cavemen, #ancient, #old times

Back to download view
14 Comments / Replies (Who?) - 10 Feedback Posts, 1 Thanks Posts
Hide Thanks Posts for this thread (Show only feedback)
dracine

OMG, just the other day my sister and I were talking about this show!!

This nice guy will find a home in my Stoneage neighborhood, thank you for sharing!
Pixelhate

I admire the search of accuracy and detail you've put into it. Thanks for the time travel also !
Understand Material definition-TXMT and customize the look of your objects ! This way

"The longer something exists in this world, the more wear and tear it will have."
CatOfEvilGenius

Thanks for the back story.

I would have thought this was just a Conan clone, but after reading, I wish I had seen that show as a child. He sounds like just the sort of character I would have liked.
Please spay or neuter your pets. --- Cat Music Video! --- my meshes
KSpiffy
Lab Assistant

This is amazing. I very, very seldom see Sims with this sort of time, detail, and dedication put into them.
Guardgian

Well done, thanks for sharing

Thanks a lot everyone for your appreciation! And glad that some of you know him. :D
I know I can't do it, but I'm still going to do it. - M. C. Escher
SealJuice
Test Subject
#10

I really want this, but the download link is broken. *cries*
billielith

Ok, I re-uploaded him, with all his stuff except the hair Mesh (to respect DJ Mur's policy).

The brown outfit is joined as a separate .package and won't install with the Sim, just dump it in your Downloads folder with the rest if you want it.

Don't forget to re-download the hair mesh on DJ Mur's thread.
I know I can't do it, but I'm still going to do it. - M. C. Escher
SealJuice
Test Subject
#12

Welcome. And now Rahan's clothes also exist in appropriate Rahan size. Rahan's a big mountain of muscles, he was not himself with a Maxis body. :P
sunnieeastman
Test Subject
DELETED POST
4th Feb 2018 at 9:04 PM

This message has been deleted by HugeLunatic. Reason: not helpful
billielith
Top Secret Researcher
DELETED POST
Original Poster
6th Feb 2018 at 3:08 AM

This message has been deleted by HugeLunatic.