Thanks to Wintermuteai1's great tutorial (http://modthesims.info/showthread.php?t=358457 ) and the research done by Xanathon (http://www.modthesims.info/showthre...#startcomments), we can now have non-default eyes as contacts cloned from the Costume Makeup item. So I had to rush right off and make some Sci-Fi style ones for myself, and I hope you'll find these useful for your own Sci-Fi or fantasy creations too.

They are for both genders and all ages, Toddler to Elder. They are all found in the Costume Makeup section in CAS, and each will have a thumbnail picture showing which eye it is.

This set consists of:

1. Eyes that are one solid colour. My old version came as three separate package files, white, black and red. The new version is one file with three presets for white, black, and red. The white preset is fully recolourable, so your sim can have solid colour eyes of any colour (or pattern) you like, or you can choose one of the other two presets to just instantly give your sim solid black eyes (such as my alien guy below) or red eyes without having to fiddle with CaST settings.

2. Lizard eyes. Good for humanoid lizardmen and other scaly creatures, such as my Lounge Lizard guy below (snout face made, although not very successfully, with the aid of a facial slider range multiplier). These are by default a natural gold-ish colour, not 100% recolourable but can be tinted in CAS to achieve other colours. 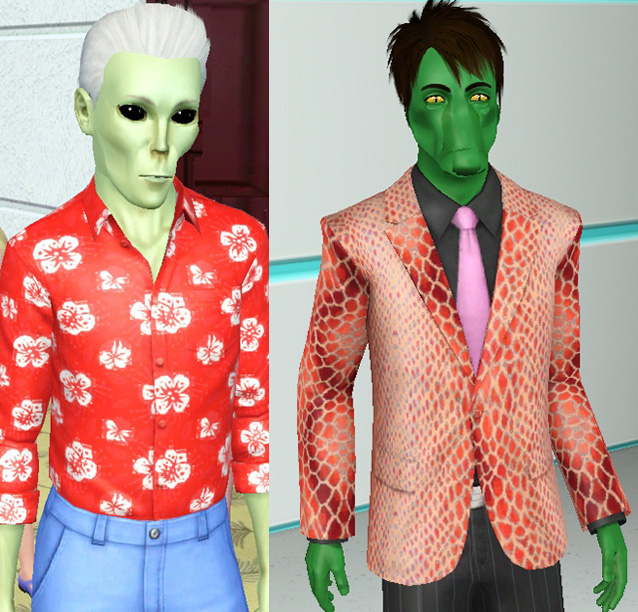 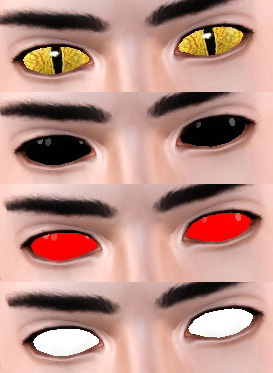 3. Cyber Camera Eyes, a dramatic-looking Sci-Fi eye consisting of photorealistic camera lens pupils/irises on a laser red sclera. Great for cyborgs, robots, aliens, and similar scary non-humans. These are preset as depicted below and not really recolourable, although they can be over-tinted a bit. 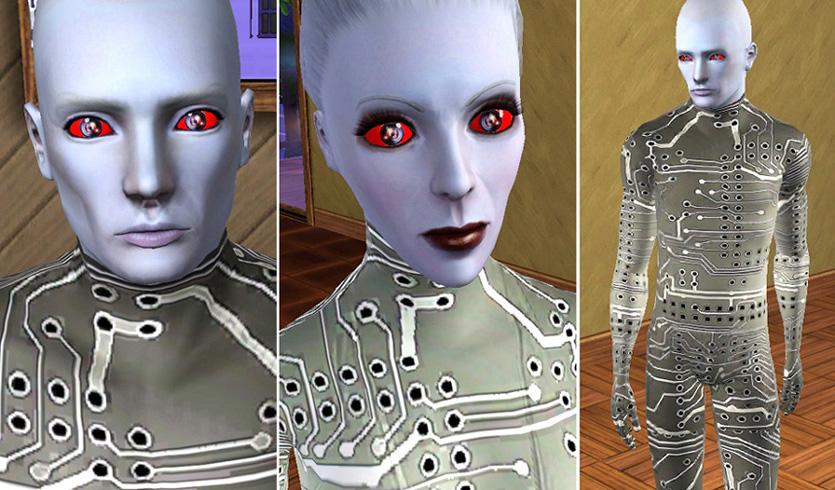 4. Solid Eyes With 2 Recolourable Areas. These are similar to the Solid Eyes but have two separate recolour areas, a large iris/pupil area and a background. They give you a similar effect to the Cyborg Eye mesh I've uploaded here, but they affect both eyes and they colour the sim's own eye rather than protruding like my Cyborg Eye does. The pic below includes depictions on how to colour the two eye areas in CaST: 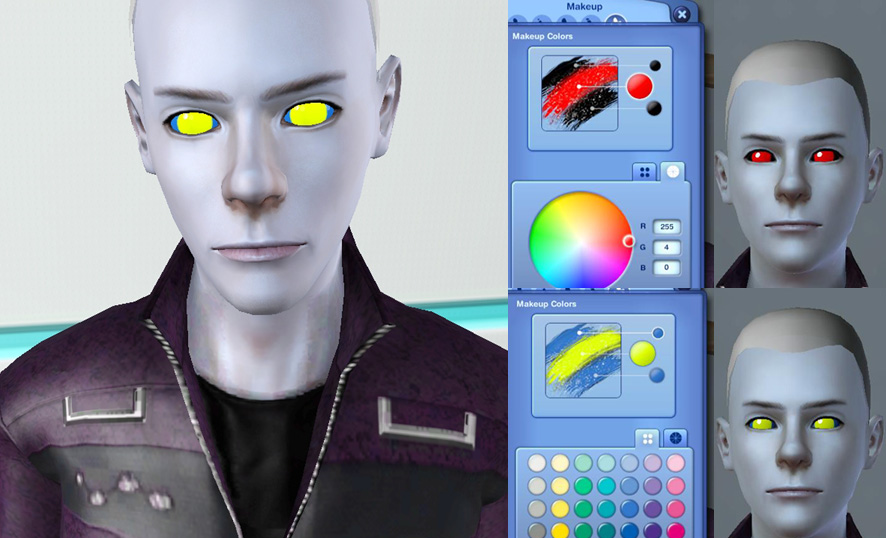 Thank you for looking, hope you'll find these useful for your Sci Fi sims!

All four eyes are in one zip file together. Just unzip the zip file and copy the .package file(s) of your choice to your Mods\Packages folder. Each eye is in its own separate package, so you can choose whether to install all of them or just one or two.

If you need more info, see:
Back to download view
49 Comments / Replies (Who?) - 40 Feedback Posts, 8 Thanks Posts
Hide Thanks Posts for this thread (Show only feedback)
Page 1 of 2
wintermuteai1

Very nicely done EsmeraldaF
Alt 255
The sky above the port was the color of television, tuned
to a dead channel.
babygirl4595
Lab Assistant
#3

this is awesome! hehe the toddler has no soul!
Arriana

Oooo, your alien is too cute!
Uberdubie
Test Subject
#5

These look INCREDIBLE!! Thank you so much for these... they'll be perfect for a number of ideas I've had.

One question/concern though before I try these out: Will new sims generated by the game start popping-up in my neighborhoods with these eyes as well? I'm only a bit leery this could turn my entire neighboorhood into a lot of demonic freaks after awhile, which I definitely wouldn't want. Thanks again.
Lhanii

Just today, I was looking around for some alien eyes and pow! Great work!
Ermazing

I've been waiting for something like this! They're perfect, thanks so much!
L-3X
Test Subject
#8

Beautiful work! The alien eyes are gorgeous! I also love the all-whites as I can now create a blind sims for a story! That or I can make a cute zombie :D
OneFarEast
Test Subject
#9

Thank you so much! Perfect for my Dr.Manhattan
Nicole102084
Test Subject
#10

Thank you! Now I can really make some characters like they are SUPPOSED to look!
Esmeralda

Ha ha, actually, an entire neighbourhood of demonic freaks sounds like fun to me! But no, these are just contact lenses, not actual eyes, so I don't think that will happen (unfortunately, LOL).
shelbo
Field Researcher
#12

I might just have some nightmares tonight. lol :p
yhibiki
Test Subject
#13

Ooh, thanks for making these. I have a small question though -- are the lizard eyes recolorable at all, or are they stuck at yellow?
Dragosal
Test Subject
#14

you are pure awesome! i had been hoping for something like this!!!

Yes! See new update to this thread, and new screenshot. I hadn't thought of recolouring them, as I was only going to use them 'au naturelle', but I've now gone back and experimented and yes, they are recolourable. The only two colours that really 'take' effectively are red and green, but they look great.
Eniwa
Test Subject

Finally more than just the alien contacts from GOS, I hope someone will make cat eyes soon because I wanted to but the process was too frustrating for me. I will use the Lizard eyes a lot I think since I love sci-fi sims. Thanks so much!

Just out of curiosity Why are the Black, Red and White different files? If the white can be made any color like the Black ones from GOS I'm not really sure why you'd use all 3 files, Sorry if it's a stupid question.
My Kuja sim http://games.groups.yahoo.com/group/Sephiroth_Is_A_God/
felfeloo7
Lab Assistant
#19

wow, thanx for the nightmares!!! Love it though
-Isis-
Esmeralda

Partly for convenience and simplicity so that it's possible to just immediately have red or black eyes without having to mess around with colour settings. You don't need to install all three files, just install the red one if it's only the red eyes that you need, the black one if you only want black eyes, and so on. The white eyes CAN be recoloured to black or red, but getting the exact bright laser-red shade I made the red eyes with requires messing around with the colour wheel. And also, recolouring the red eye gives a different effect from recolouring the white eye - because it was MADE in red, recolours will retain a red tinge, an effect that you can't get with the white eye, so you get a bit more versatility.
BlackJack19

hahah these are so freaky. awsome! thank you
m0nst3rs
Test Subject
#23

I've been hoping for some cat contacts as well. *sigh* nobodys made them yet though! >_<
Kudos to you, although i would've liked to color them myself. . . :x
FifthDream
Test Subject
#24

These are really great. Thanks!
Esmeralda

I'm hoping to do some cat eyes soon, as well as some multi-coloured fantasy eyes - if they turn out OK, will try uploading them!