by AlfredAskew Posted 21st Aug 2009 at 4:38 AM
32 Comments / replies (Who?) - 25 Feedback Posts
This is a Maxis Recolour which means that it is a recolour of an item that already exists in your game. Please check the Expansion pack requirements to see which game pack it recolours.
Picked Upload! This is a picked upload! It showcases some of the best talent and creativity available on MTS and in the community.

What you get:
Three types of brows in Brown, Red, Blond, Black and Gray, binned and familized for the sake of your poor overloaded CAS. They're clearly labeled for easy deletion. All hand-drawn I might add, for my ego's sake.

Thirty seconds on why eyebrows are probably the most important part of your face as far as facial recognition goes.

Eyebrows grow--obviously, on your brows. Right? Yeah, and guess what your brows are part of. Your forehead. And your eye sockets. Look at some picture of someone, yeah I'm talking about that poster Justin Timberlake you've got on your wall. Blur your eyes and what can you see? Justin right? You can see the fuzzy shapes of his eye sockets and the general shape of his head--about a third of which is his forehead.

Your eyebrows are like cheat-sheets to the upper half of your face.

Eyebrow shape falls in two categories. The first is the inherent shape from the underlying bone structure. The second is the actual growth structure of the hair.

Eaxis lets us modify the bones structure... sorta. We can move eyebrows up and down, slant them clockwise and counterclockwise, make them thinner and arch them. Yeah no, that's such crap. We have little to no control over forehead shape, so the brow shapes are limited.

Tom's brows are pointed directly above his eyes. There's no way to actually get his forehead domed in the right way to achieve this shape. So painting it on has to serve.
These brows are shaped like a smooshed triangle, with thick hair throughout.
Yeah. So that's Model 'T'. The archetypal "Pointy brows".

Meanwhile, Model 'C', the "Angry Eyebrows' make up for the lack of control over the amount of hair. Angry brows are a notch closer to the unibrow. Because Eaxis neglected to give us anyway to move the eyebrows closer together.
Chris also has distinct growth pattern, in that past the temples there's significantly less hair. I found a very similar shape in fanseelambs "Gale Brows" if any one wants some brilliant Maxis-matchy stuff that's similar.

The thing about these brow is um... I kind of messed up, in that they don't look like the person's they're supposed to. But they're perfectly good brows besides that.
Pretty much, these were made for those asian sims who need that thin, ill-defined brow look. In addition to those with thin, sock-shaped brows in general. I don't have so much to say about these, except that they change a face so much, they get an awful lot of use in my game.


I know what you're thinking. Yeah Alfi, those brows are only for dudes.
Yeah no. Eaxis happily made lady sims genetically inclined to have thinner brows. And besides that, shame on you for thinking all women have to have generic plucked brows. These brows look good on male and female. Female on the left, male on the right. 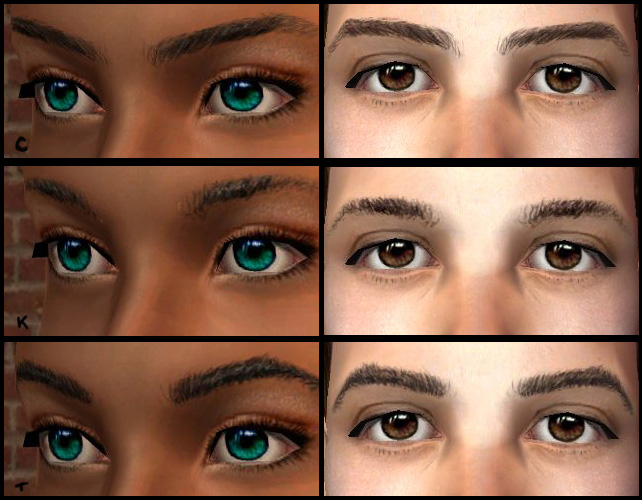 And we're done. Such a temptation to just write my thesis on brow shape right here.
I'm working on matching default replacements right now in case anyone gives a beaver dam.

Eyes in pictures by Shady or Aneh or me depending. The blue eyes and Tom's are mine, the old guy's eyes are Shady's and the rest are Aneh.
Also worth mentioning, Skintones by HP and Twitchhugstrees, with my own edits to them.

Use the textures as you will. Make your own pretty happen with them. I'd be much obliged if you'd ask me first. I shouldn't even have to say, but don't be stupid with the stealing and the re-uploading business. That's silly.
Cheers.

Back to download view
32 Comments / Replies (Who?) - 26 Feedback Posts, 5 Thanks Posts
Hide Thanks Posts for this thread (Show only feedback)
Page 1 of 2
LiterateCat

I love them, the last one in the woman vs. man comparison is very similar to mine, and I'd love to see defaults of them. Thanks a lot!
Need to bin the hair you create? To geneticize your eyeset or skinset? so PM me!:)
CatOfEvilGenius

Can't think of something you made that I didn't download. Lovely brows. Maxis matchy, but SO much better than what's in game.
Please spay or neuter your pets. --- Cat Music Video! --- my meshes
Guardgian

Oh wow, perfect, gorgeous, so realistic ! I'll be using your brows a lot ! Thanks

Ooh ooh ooh. These are fantastic! They look totally fine and wonderful with Maxis skin too, and I love that they're binned. And your description cracks me up, as usual. Thanks a bunch!
tumblr | leefish.nl | all offsite downloads | complete downloads gallery | terms of use
Simulitis

Whoo, I totally adore your style! Realistic and of very high quality without being scarily shiny. And of course the fact that you go for the slightly imperfect look of flesh and blood humans instead of the boring barbie-like "prettiness". Plus the hilarious descriptions = pure WIN! Many, many thanks for all the terrific goodies!

you are positively phenomenal! I am always so excited when you have an upload because it means another step towards sweet sweet realism for my sims. AND AND you made eyebrows like MINE!!! YAAAYS! I'm totally the almost unibrow brow and nothing else has come this close. THANK YOU THANK YOU THANK YOU!
MistyBlue

Wow, these can't possibly get more awesome than they are!! Amazing work, it always makes me so happeh when I see another download from you

Thank you and good luck for your thesis

I didn't quite follow your whole tirade, but the brows look swish none the less.
sgarciazzy

I'm not downloading; personally, I like my "Barbie" look, but I'd read your book any day. ;P
unstuck

If you continued your thesis on eyebrow shape, I would read it !

Thanks for these great realistic (hand drawn! you are an artiste!) brows and thanks for your brief treatise on why they are so important. In real life, I stress about the shape of my eyebrows all the time :/

Are Maxis scrabbling at your door yet? Seems their artists could learn a lot from you!
Which was the old guy you mentioned, by the way? None of 'em looked old to me, just... realistic! =]
Remy Luv
Test Subject
#16

Your pretties always find a home in my downloads folder, Alfie, regardless of the fact that I'm trying to cut back on my unhealthy downloading obsession. Shame on you for making such exquisite content. :'D

I was totally fascinated by your tirade - I shave off my eyebrows and draw them back in with black eyeliner a la drag queens/goths/Amanda Palmer, so I think about my eyebrows and how they look a lot [grin]
When she was good she was very very good, but when she was bad she was fabulous.
KiaraRawks

This is one of the first cc items I downloaded and I thanked you back then, but now I want to THANK you for making these. They get a lot of use in my game. I got so tired of three brow choices and none of them looked particularly realistic, especially on the blond brows (to me they looked like braids). So I thought I'd give them a shot and darned if they didn't look as great as I had hoped.

Thanks again for your artistic eyebrows.
Proxian_girl

Thank you, thank you, a million times thank you!
midnightparadox
Test Subject
#23

These brows are absolutely perfect for the sim I've been making of my brother. The "angry eyebrows" look JUST like his, and you're right, it's SO important to see the right brow as part of the face.
tachyglossus

I must say I really appreciate some thicker eyebrows. I get tired of pencil thin ones, ESPECIALLY on women. Your little editorial on eyebrow hair growth versus forehead shape was also entertaining.
billielith

Interesting set. Good eyebrows are so hard to find. These are great! Thanks!
I know I can't do it, but I'm still going to do it. - M. C. Escher